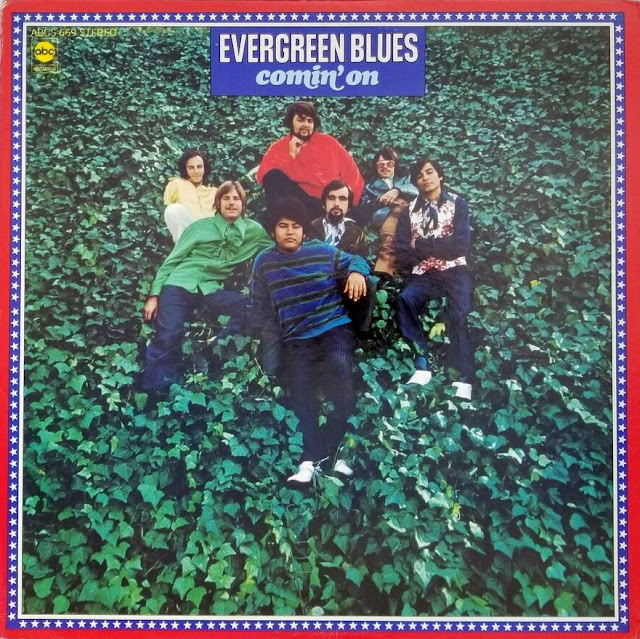 The seeds of Evergreen Blues were planted at St. Alphonsus Catholic elementary school in East Los Angeles. It was in the basement auditorium of this school that some of the greatest "Eastside Sound" dance and shows occurred in the 60s, featuring all the best bands including Thee Midniters, Cannibal & the Headhunters, The Premiers, The Blendells, The Jaguars with the Salas Brothers, The Ambertones, The Blue Satins, my band, Mark & the Escorts, and many more. Getting back to the genesis of Elijah, it was in this environment that Hank Barrio, Joe McSweyn, Sam Lombardo, and Manny Esparza took their positions on guitar, bass, drums, and vocals respectively.  Manny says he became the vocalist by default because he could carry a tune better than the others.  Manny's vocal influences were who he calls the "tough r&b singers" such as James Brown, Otis Redding, Wilson Pickett, Sam Moore, and Eddie Floyd, as opposed to the slicker Motown singers. Manny says he was a Stax/Volt guy.

As the band improved, they started to play local gigs and were called Two Thirds Majority. On rhythm guitar in the original band was Tom Merlino, another St. Alphonusus student, who did not stay in the band very long since he didn't seem to have the musical ability of the others.  They played a lot of r&b, but also did songs by groups such as The Rascals and The Buckinghams. Hank, Joe and Manny went on to Cantwell High School (another parochial school), while Sam Lombardo went to Montebello High School. There he met Steve Lawrence (no relation to the singer of the same name), who was added to the band on organ and saxophone.  After high school, fellow Montebello High alums Tom Bray and Ken Walther were added on trumpet and trombone. This completed the puzzle.  They played many venues, including some of the storied East L.A. spots such as Kennedy Hall, the Montebello Ballroom, and aforementioned St.Alphonsus Auditorium. They shared the stage with Eastside bands such as Thee Midniters, The Ambertones, The Emeralds, The Exotics, and Little Ray & the Progressions.

After hooking up with manager Jim King, the band secured a major record deal with Mercury Records in 1967. Their name was changed to Evergreen Blues for the record.  It was a time in the music business when money was flowing.  Having just graduated high school, they went on an 18 city national tour. Musical equipment and clothes were bought for them by the record label and they found themselves riding in limos and flying in a private Beechcraft airplane. Pretty heady stuff for teenagers! They found themselves playing shows on the bill with artists such as The Righteous Brothers, Gary Puckett & the Union Gap, and Chuck Berry. On that first tour Hank and Joe were merely 17 years old. In fact, the band had to go through court and have their parents approval with the recording contracts.

Despite their under age status they played some clubs on the tour, including "The Rooster Tail in Detroit. It had a black clientele, but Evergreen Blues were accepted and appreciated because their music was sufficiently good as well as funky.  Manny also had an afro that rivaled American Basketball Association players of the period like Dr. J. The tour also went to Florida, New York, and some other states. A non-musical memory of the tour that stands out in Hank's mind is flying in their small Beechcraft airplane over the Great Lakes in the fog during the same period that Otis Redding had gone down under almost identical circumstances (similar plane, same area, a month later.)  Hank says the band was very nervous on the flight and were afraid they might suffer the same fate as one of their musical heroes.

Their first album entitled "Evergreen Blues," included a song written by their manager, Jim King, under the name L.T. Josie, called "Midnight Confessions."  (Small world department:  My band at the time called Nineteen Eighty Four recorded an L.T. Josie song called "Three's a Crowd." Our producer on the record was Tommy Coe, who engineered the Evergreen Blues second album.)  Released as a single, "Midnight Confessions" received some airplay around the country, even becoming a hit record in Florida.  Ironically, shortly thereafter The Grass Roots recorded a virtually identical version of the song and it became a major hit record. That was a heartbreaking experience for Evergreen Blues.  However, they got up, dusted themselves off, and did a second album with ABC Records called "Comin' On."  It included mostly original songs written by various band members. It also had two more L.T. Josie songs and a cover of Otis Redding's version of "Try a Little Tenderness." This was likely before Three Dog Night covered  it and had their first mega hit.  In fact, Evergreen Blues opened for Three Dog Night, who's manager asked Evergreen Blues not to play "Try a Little Tenderness." They went ahead and played it anyway. Good for them.

Evergreen Blues had learned "Try a Little Tenderness" from the Otis Redding version. Manny says Three Dog Night did it in more of a rock style, rather than r&b.  Evergreen Blues did record their second album at American Studios in Studio City, California and Richard Podolar, who was Three Dog Night's producer, engineered a couple of tracks. One can say it's possible that this was the connection that gave Three Dog Night the idea to record the song, which became their first hit record.  We'll probably never know for sure.  Anyway, their manager Jim King didn't like the musical direction the band was taking so he and Evergreen Blues went their separate ways. Hank acknowledges in retrospect that the band's songwriting wasn't yet quite developed on that album.

At this juncture, enter Edward James Olmos.  Yes, the actor, who was then an r&b singer.  He had played around Hollywood with his band Eddie James & the Pacific Ocean.  One of the venues they worked a lot was the fabled Gazzari's on the Sunset Strip.  Olmos wound up joining Evergreen Blues, sharing lead vocal duties with Manny Esparza.  At the time Eddie was known for his flashy showmanship, which included some wicked splits.  Hank and Manny both acknowledge that the band learned a lot from Eddie.  He taught them about dynamics, helped with arrangements, and turned them on to a lot of classic r&b records and artists.  Eddie also got them their first regular club gig.  It was a black club called the Citadel du Haiti on Sunset Boulevard, where the band was paid $50 total and all the soul food they could eat.  In those days the deal wasn't as bad as it sounds.

Through Olmos they met Delaney Bramlett, who was then performing with his wife as Delaney & Bonnie, who would later score a major hit with "Never Ending Song of Love". At one point, Delaney & Bonnie opened for Blind Faith on a tour.  Eric Clapton who was then a member of Blind Faith took a great liking to Delaney & Bonnie's style and band.  Clapton wound up going on tour playing with Delaney & Bonnie and eventually brought along his friends Dave Mason and George Harrison to share in the fun and musical inspiration.  Eric eventually used Delaney & Bonnie's band to form Derek & the Dominoes. The result was the classic record "Layla" (the early 70s up tempo version.)  Eddie Olmos played with Evergreen Blues for about a year before they went their separate ways.  Eddie went on to become a successful and excellent actor, best known for his role as El Pachuco in the play and movie Zoot Suit, the classic movie Blade Runner, and his role in the 80s mega hit television series, "Miami Vice". Evergreen Blues played on into the early 70s, a time when they became Elijah and recorded two more albums.