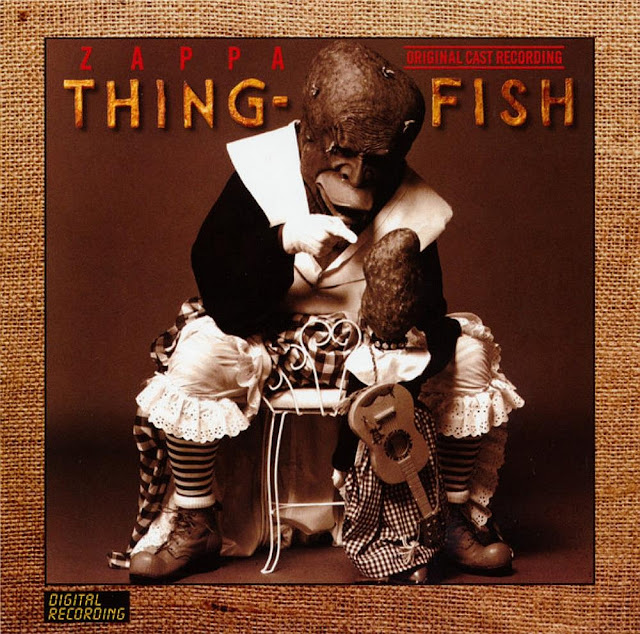 "Thing-Fish" by Frank Zappa was originally released as a triple album box set on Barking Pumpkin Records in 1984. It was billed as a cast recording for a proposed musical of the same name, which was ultimately not produced by Zappa, but later performed in 2003, ten years after his death. The album's storyline is inspired by Broadway theatre, AIDS, eugenics, conspiracy theories, feminism, homosexuality and African American culture. It involves an evil, racist prince/theater critic who creates a disease intended to eradicate African Americans and homosexuals. The disease is tested on prisoners who are turned into "Mammy Nuns" led by the story's narrator, "Thing-Fish". The story within a story is a satire of a White Anglo-Saxon Protestant couple, Harry and Rhonda (actually played by Italian-Americans), who attend a play performed by the "Mammy Nuns", and find themselves confronted with their pasts: Harry presented as a homosexual boy, Rhonda presented as a sex doll brought to life.

The story was constructed during the recording sessions, which included producing new overdubs for recordings which previously appeared on Zappa's albums "Zoot Allures", "Tinseltown Rebellion", "You Are What You Is" and "Ship Arriving Too Late to Save a Drowning Witch". The release of the album was delayed when Barking Pumpkin Records' previous distributor, MCA, refused to distribute the album. It was instead released by Capitol Records in the United States, accompanied by a "Warning/Guarantee" written by Zappa himself. "Thing-Fish" was initially received poorly by critics, who criticized the use of previously recorded material, but has since been reappraised for its highly satirical content. Before leaving for London to record with the London Symphony Orchestra, Frank Zappa was home during Christmas season in 1982, and kept busy by writing, producing treatments for three films and a Broadway musical called "Thing-Fish". Between 1981 and 1982, Broadway theatre had shifted from conservative musicals to experimental plays that were viewed as either being pretentious or vulgar. "Thing-Fish" satirized statements made by theater critics at the time, as well as arguing against the dumbing down of American culture. Previously, Zappa unsuccessfully attempted to stage two musicals on Broadway, "Hunchentoot", which formed the basis for the compact disc reissue of "Sleep Dirt", and a musical adaptation of William S. Burroughs' The Naked Lunch. "Thing-Fish" also drew conceptual themes from AIDS, feminism, gay chic, conspiracy theories and issues of class, greed and race.

The script was developed by recording songs beforehand; much of the songs in the play were previously recorded for other albums, including "Zoot Allures", "Tinseltown Rebellion", "You Are What You Is" and "Ship Arriving Too Late To Save A Drowning Witch". New vocals were combined with previously released tracks and new Synclavier music. In addition to the new songs, the previously recorded songs include new overdubs moving this storyline forward. As the recording process continued, Zappa brought in revised scripts and improved the work by editing or changing aspects with which he was dissatisfied. Zappa attempted to produce "Thing-Fish" as a Broadway production. In promotion of the planned musical, a photo sequence based upon the "Briefcase Boogie" scene was shot for the pornographic magazine Hustler, accompanied by plot excerpts from the scene. The sequence was 28 pages long. While the album was released, Zappa was unable to raise the $5 million budget in order to produce the play, and shelved the project. Subsequently, "Thing-Fish" dialogue appeared on the album Frank Zappa Meets the Mothers of Prevention, during the piece "Porn Wars". The album was adapted for a limited stage production that took place in England in 2003. Many elaborate details were changed due to the small scale of the production.

Frank Zappa stated: "The simple thought behind Thing-Fish is that somebody manufactured a disease called AIDS and they tested it. They were developing it as a weapon and they tested it on convicts, the same way as they used to do experiments on black inmates, using syphilis. That's documented. They used to do these experiments with syphilis on black inmates in US prisons. That's fact. So we take it one step further and they're concocting the special disease which is genetically specific to get rid of 'all highly rhythmic individuals and sissy boys.' So I postulate that they do this test in a prison and part of the test backfires and these mutants are created." The "Thing-Fish" characterization was performed by Ike Willis, who helped shape the dialogue himself using African American Vernacular English According to Willis, "in my family, we sort of joke around with dialects, and what it sounded like to me was the poet Paul Laurence Dunbar. I asked Frank if he had ever heard of this guy, and he said, 'No,' so I started giving him examples of Dunbar's work, and eventually, that ended up being a big influence on the Thing-Fish dialect."

Minstrel shows served as a source of satire within the storyline. The "Thing-Fish" characterization is also seen as satirizing Amos 'n' Andy, a successful radio series and controversial television series which drew protests from the NAACP, who perceived the dialect spoken by the main characters and supporting character Kingfish as being portrayed as being "too dumb to speak English." Additionally, Zappa satirized the Mammy archetype; the AIDS-like disease in the storyline turns prisoners into "Mammy Nuns" which are round and dress like Aunt Jemima. The Mammy archetype derives from the fictional character Mammy, as portrayed by Hattie McDaniel in the film Gone With The Wind. "Thing-Fish" is delivered as a story within a story, focusing on a spoiled White Anglo-Saxon Protestant couple, Harry and Rhonda, who attend a play that initially begins as being about and starring the Mammy Nuns. The story ultimately ends up following these characters through a series of ideological fads. It is revealed that Harry had become a homosexual as a result of the women's liberation movement, which caused him to lose all sexual desire for women; the younger versions of the characters are portrayed in the characters "Harry-As-A-Boy" and "Artificial Rhonda", with the young Rhonda being portrayed as a rubber sex doll, while her older counterpart becomes increasingly fascistic and feminist towards the end of the story.

The concept of Thing-Fish satirized minstrel shows. "Mammy Nuns" resemble blackface performers. The prologue is delivered as a spoken monologue over an instrumental piece with a heavy rock guitar riff. It is followed by the song "The Mammy Nuns", which originated as a hard rock instrumental, which appears in a live recording as "The Mammy Anthem" on "You Can't Do That on Stage Anymore, Vol. 1", and opened performances in June and July 1982. "Galoot Up-Date" is an altered version of the recording "The Blue Light", which appeared on Zappa's album "Tinseltown Rebellion". As Harry and Rhonda express admiration for the "performance" of the Evil Prince, an early version of Zappa's Synclavier composition "Amnerika" is heard. "Clowns on Velvet" was performed live as a spirited, playful instrumental. A recording of the instrumental version featuring guitarist Al Di Meola was planned for release on the album "Tinseltown Rebellion", but DiMeola refused its release. Johnny 'Guitar' Watson, appearing as the character Brown Moses, delivered running commentary in the song "He's So Gay", and sang the song "Brown Moses", which was influenced by soul and gospel music. The play's first act is concluded with "Artificial Rhonda", a rewrite of the song "Ms. Pinky", which appeared on "Zoot Allures".

The next track begins with early Synclavier music by Zappa, and the computerized voice of "The Crab-Grass Baby", followed by the Mammy Nuns singing "The White Boy Troubles". The Evil Prince, defeated at his own hands, delivers a soliloquy in the form of a Broadway piano ballad, "Wistful Wit a Fist-Full". The "Thing-Fish" album was identified as an 'original cast recording'. Barking Pumpkin Records prepared to release the album with distribution by MCA Records. MCA produced a test pressing of the triple LP set, but withdrew their distribution after a woman in their quality control department became offended and upset by the album's content. A deal was quickly made with EMI Records, which would allow "Them Or Us" and "Thing-Fish" to be distributed by Capitol Records in the United States. Zappa wrote a "warning" which appeared on the inner sleeves of these albums, as well as Frank Zappa Meets the Mothers of Prevention, which stated that the albums contained content which a truly free society would neither fear nor suppress, and a "guarantee" which stated that the lyrics would not cause eternal torment in the place where the guy with the horns and pointed stick conducts his business.

"Thing-Fish" was poorly received by critics upon initial release; a common thread of criticism was that many of the songs on this album derived from previously released recordings, and some detractors considered it to be nothing more than a compilation album. Barry Miles found it to be one of his least substantive works. More recently the album has been reappraised, described by Kevin Courrier in Dangerous kitchen: the subversive world of Zappa as a compendium of Zappa's most explicit attacks on political and sexual hypocrisy in American culture collected together in one huge volley. In Frank Zappa and musical theatre: ugly ugly o'phan Annie and really deep, intense, thought-provoking Broadway symbolism, "Thing-Fish" is described as an extraordinary example of bricolage. As reviewed by François Couture for the website Allmusic, Couture described "Thing-Fish" as Zappa's most controversial, misunderstood, overlooked album, stating that it was not a masterpiece, but more than rehashed material.