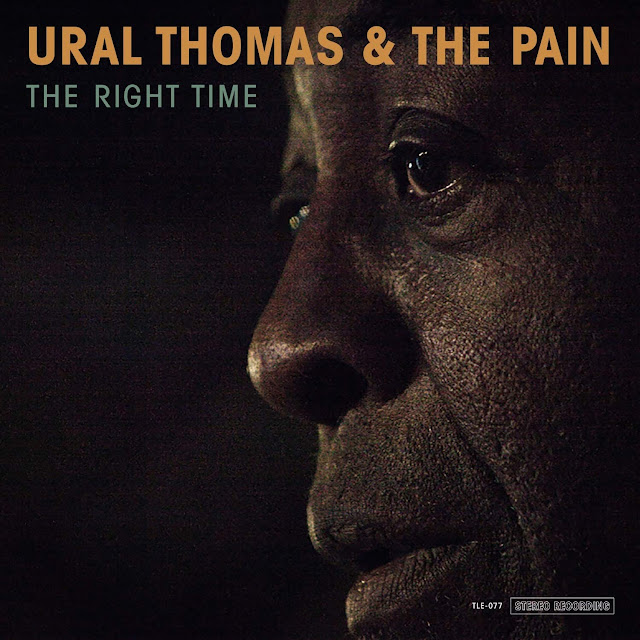 If life was at all fair Ural Thomas would be a household name, his music slotted into countless sweet, seductive mixtapes between James Brown, Otis Redding, and Stevie Wonder (all of whom Thomas has performed with.) Straddling the line between hot soul shouter and velvety-smooth crooner, Thomas released a few singles in the late 60’s and early 70’s; most notably "Can You Dig It", which featured backing vocals from soul luminaries Merry Clayton, Mary Wells and Brenda Holloway. Thomas played over forty shows at the legendary Apollo Theater before turning his back on an unkind business and heading home to Portland, Oregon.

It goes without saying that a man practically built out of rhythm would never stop playing music. Thomas began hosting a regular Sunday night jam session at his home that ran for nearly twenty years. A de facto mentor to many of the younger players, Thomas reminds us all that "If you care about what you’re doing, you need to build those muscles and do the work. Don’t get discouraged, do it for love. Even if you’re digging ditches, do it with passion". In 2014, local soul DJ Scott Magee sat in on drums. The two became fast friends and at Magee’s urging Thomas decided to give his musical career another shot. Magee became the musical director, they put together a band, and in 2016 released a self-titled album on Mississippi Records. In 2017 Thomas signed with Tender Loving Empire Records and began work on what, in many respects, will be his debut full length. Diving deep into lifetime of melodic creativity, Thomas and his band got to work. Recorded in Magee’s Studio Arthur’s Attic, "The Right Time" features the air-tight work of Magee on drums, percussion, and backing vocals, Bruce Withycombe (The Decemberists) on baritone sax, Portland jazz scene fixture Brent Martens on guitars and vibraphone, Arcellus Sykes on bass, Steve Aman (Lady Rizo) on piano and organ, Dave Monnie on trumpet, Willie Matheis (Cherry Poppin’ Daddies) on tenor sax, and Jasine Rimmel, Joy Pearson, Sarah King, Rebecca Marie Miller on backing vocals. The Arco Quartet performed the strings, and the record was engineered and mixed by Jeff Stuart Saltzman (Blitzen Trapper) and mastered by JJ Golden (Sharon Jones, Ty Segall).

One might think after a sizeable taste of early success Thomas would be more than a touch bitter - yet the opposite is true. "We have to be positive if we want the world to get better" Thomas advises. "We’ve come a long way, but if you carry a grudge with the whole world you’ll stop your growth. We’re a family, all just brothers and sisters, descendants of Adam. You can’t get anywhere without an open heart". A developing artist at nearly eighty years old, for Thomas music has always been about bringing people together. "If we play for twenty people we cook it like it’s twenty thousand" says Thomas. "If we make someone smile we’re satisfied. They’re ain’t no difference between us. It’s all love and brotherhood. If folks listen to my record and feel that, I’ll feel very blessed". Standing in bold defiance of the idea that aging is a reason to slow down and stop living, for Thomas the right time to get down is the next time someone plugs in a guitar or puts on a record. Ural is ready - are you too ?

The soul revival of the last decade or two has brought the blessing of exciting new sounds from a once nearly dormant genre. That the movement has been driven by older artists getting a fresh start has made it all the more appealing. When singers like Sharon Jones or Charles Bradley appeared to come out of nowhere late in life, their stellar music raised questions about why we'd never heard them until so late. The latest entry into that scene, such as it is, Ural Thomas has a now-obvious biography: a few singles 50 years ago, decades of silence, a surprisingly good record. "The Right Time", technically the debut from Ural Thomas and the Pain, offers a less obvious breadth of sound, showing a star happily still at his peak even as he nears 80.

The drums and the James Brown-y horn hits that open the album suggest Thomas is a certain kind of performer. He's got a little funk to him and a willingness to get deep into the groove, all in line with his biggest single from the past, 1967's "Can You Dig It ?" New cut "Slow Down" might be about Thomas's experience of how fast things move, but he doesn't sound like someone interested in pacing himself, no matter what he sings. When he shouts "Money...money...money! / Time...time...time..." and moves onto other happy topics before finally breaking into a shrieking, it sounds like force of a pent-up soul career letting loose. But Thomas moves from there into "No Distance (Between You And Me)", a track more grounded in Motown (though lacking the sort of bass playing the Funk Brothers would have ridden), touching on the sensibilities of a group like the Temptations. Just two tracks in, and it's hard to figure if Thomas comes from a harder funk tradition like Brown or a smoother pop place, somewhere more like Smokey Robinson. As the album progresses, it becomes clear that Thomas has no intention of being pigeonholed, moving from those sounds more toward later Stax, earlier doo-wop, and whatever else suits him. Likewise, while it's fair to put him with other late-noticed soul singers, he wouldn't be an easy fit on Daptone. The doo-wop influences make for some of the most striking moments on "The Right Time", not least because they reveal an artist willing to reach into every corner of his toolkit.

On "Smoldering Fire", Thomas uses his falsetto to good effect, revealing his range. His tone on this track might not be as clear as it could be (making for the rare wondering what a younger Thomas might have done), but his phrasing and expressiveness more than make up for it. Of course, right after that cut, Thomas moves into the more rocking title track, closer to James Brown territory. That versatility makes Ural Thomas and the Pain hard to pin down. Thomas could have been a crooner, a funk singer, a smooth R&amp;B artist. He could have bounced between Otis Redding and Isaac Hayes. Instead he disappeared for decades. Fortunately, his reemergence shows roots across the Rhythm & Blues spectrum, but isn't indebted to any of them. Instead of a throwback to a given line, we get simply Ural Thomas in the present, something that's easy to dig.