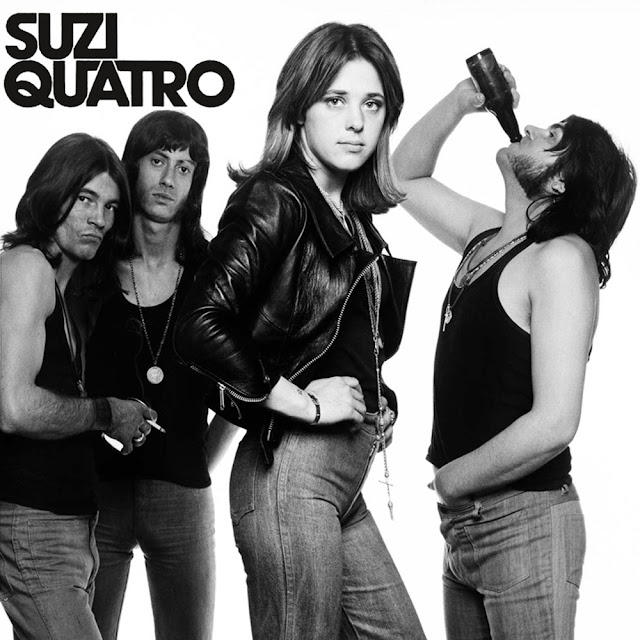 Suzi Quatro, fourth of five children, born under the sign of Gemini, on June 3rd, 1950, in Detroit Michigan. She was raised in a musical family, including 3 sisters and one brother, who all played various instruments. Suzi herself made her debut on stage playing bongo’s in her fathers jazz band, The Art Quatro Trio. From an early age she studied classical piano and percussion, then aged 14, began an all girl band with elder sister Patti, called The Pleasure Seekers. Suzi was told she would be playing bass guitar, which was as tall as her! she a quickly became the lead singer and front person, this band toured for 7 years, very successfully, releasing a few singles along the way, then changed their name to cradle in 1969. It was in this band, a couple of years later, that Mickie Most (Producer) came to a concert, and offered Suzi a solo contract. She flew to England in 1971 to begin her journey  to fame. Soon after Suzi began working with  now legendary songwriters Chinn and Chapman (Mike Chapman also produced) , which resulted the huge hit, "Can The Can", which went to number one in May 1973, and went on to sell two and a half million copies worldwide. Between 1973 and 1980, Suzi Quatro featured in the British charts for no less than 101 weeks, and has sold to date over 55 million records, and still counting. Her hits included "48 Crash", "Too Big", "Devil Gate Drive", "Daytona Demon", "The Wild One", "She’s in Love With You", "Mama’s Boy", "If You Can’t Give Me Love", "Rock Hard"  and a million seller in the USA "Stumblin' In", a duet with Chris Norman.

Suzi Quatro moved to England in 1971, after being spotted by the record producer Mickie Most, who had by that time founded his own label, Rak Records. Most had been persuaded to see Cradle by Michael, the brother of the Quatro sisters who had assumed a managerial role for the band. In common with many in the record industry at the time, Most was seeking a female rock singer who could fill the void that the death of Janis Joplin had created. According to the Encyclopedia of Popular Music, his attention to Quatro was drawn by "her comeliness and skills as bass guitarist, singer and chief show-off in Cradle." She had also been attracting attention from Elektra Records and subsequently explained that "According to the Elektra president, I could become the new Janis Joplin. Mickie Most offered to take me to England and make me the first Suzi Quatro – I didn't want to be the new anybody. Most had no interest in the other band members and he had no idea at that time of how he might market Quatro. She spent a year living in a hotel while being nurtured by Most, developing her skills and maturing. Most later said that the outcome was a reflection of her own personality.

Quatro's first single, "Rolling Stone", was successful only in Portugal, where it reached No. 1 on the charts. This was a solo effort, although aided by people such as Duncan Browne, Peter Frampton and Alan White. Subsequently, with the approval of Most, she auditioned for a band to accompany her. It was also after this record that Most introduced her to the songwriting and production team of Nicky Chinn and Mike Chapman, who wrote songs specifically to accord with her image. She agreed with Most's assessment of her image, saying that his influence, at which some of his artists - such as Jeff Beck and Rod Stewart - balked, did not extend to manufacture and that "If he tried to build me into a Lulu, I wouldn't have it. I'd say 'go to hell' and walk out." This was the height of the glam rock period of the 1970s and Quatro, who wore leather clothes, portrayed a wild androgynous image while playing music that "hinged mostly on a hard rock chug beneath lyrics in which scansion overruled meaning." In 1972, Quatro embarked as a support act on a UK tour with Thin Lizzy and headliners Slade. Rak arranged for her to use Thin Lizzy's newly acquired PA system during this, incurring a charge of £300 per week that enabled the Irish band to effectively purchase it at no cost to themselves. In May 1973, her second single "Can the Can" (1973), which Philip Auslander describes as having seemingly nonsensical and virtually unintelligible lyrics, was a No. 1 hit in parts of Europe and in Australia.

"Can the Can" was followed by three further hits: "48 Crash" (1973), "Daytona Demon" (1973) and "Devil Gate Drive" (1974). "Can the Can", "48 Crash" and "Devil Gate Drive" each sold over one million copies and were awarded gold discs, although they met with little success in her native United States, where she had toured as a support act for Alice Cooper. Rak artists had generally not succeeded in the US and her first album, "Suzi Quatro", was criticised by Alan Betrock for its lack of variety, for its Quatro-written second-rate fillers and for her voice, described as often too high and shrill, lacking punch or distinctive phrasing. Writing for Rolling Stone, Greg Shaw was also downbeat, saying that the album may be a necessary beginning. In 1973, Quatro played on the Cozy Powell hit "Dance With the Devil", a track written by Mickie Most while Cozy Powell was part of the Rak roster. Musicians who acted as her backing band around this period included Alastair McKenzie, Dave Neal and Len Tuckey, with Robbie Blunt also being listed by some sources. Tuckey's brother, Bill, acted as tour manager.

With the exception of Australia, her chart success faltered thereafter, as proven with her 1975 hit "Your Mamma Won't Like Me", which proved to be a moderate success in the UK. Further singles "I Bit off More I Could Chew" and "I May Be Too Young", both failed to reach the UK Top 50. Quatro recorded an album in 1976 and released a new single in 1977 called "Tear Me Apart" which reached the UK Top 30, her first hit to have done so in three years. It would take another year for another big hit, this time with a change to a more mellow style giving Quatro a 1978 single "If You Can't Give Me Love" that became a hit there and in the United Kingdom. Later that year, "Stumblin' In", a duet with Chris Norman of the band Smokie, reached No. 4 in the US. Both tracks were featured on the "If You Knew Suzi" album. A year later, Quatro released "Suzi and Other Four Letter Words", but none of her other work had much US success. This featured the hits "She's in Love with You", which made No. 11 in Britain, "Mama's Boy" (number 34), and "I've Never Been in Love" (number 56).

From 1977 to 1979 Suzi spread her wings and landed a part on the worldwide hit TV Serial Happy Days, playing Leather Tuscadero opposite Henry Winkler and Ron Howard.  She continued to act in other shows including, Minder, Dempsey and Makepeace, and more up to date,  Absolutely Fabulous and Midsomer Murders. In 1986 Suzi made her West End debut playing the leading role of Annie Oakley in Irving Berlin’s ‘Annie Get Your Gun’ for which she received great critical acclaim. 1988 Suzi spread her wings again, and hosted her own talk show called ‘Gas Street’ which ran for a year. 1989 Suzi was one of the first rock and roll acts to go to Russia, where she performed for over half a million people in just six weeks. In 1991 she was triumphant again, realising a lifelong ambition by writing the music and lyrics, along with Shirlie Roden, and starring in ‘Talullah Bankhead’  it ran for its full season of 5 weeks, and Suzi received amazing critics, even though they were not officially allowed into review the show.

In January 1999 started Suzi’s radio career with BBC Radio 2, which is ongoing today. Suzi has done her own weekly programs, and many special documentaries including Elvis Presley, Otis Redding, Janis Joplin, Jim Morrison, Patsy Cline, and a recent special on her home town of Detroit. Suzi has met, interviewed or played on stage with most of her hero’s.   Suzi is a very popular DJ. even being nominated for music broadcaster of the year at the Sony radio awards in 2006 1999 also saw Suzi honoured in ‘This Is Your Life’, complete with famous red book. they caught her on her 56 date UK tour, onstage at the Palladium.. completely off guard, there were a few expletives that had to be edited out. In 2006 Suzi released the autobiographical album "Back to the Drive", which has become the fans favourite worldwide. Suzi also made an appearance alongside Charles Dance in the theatre, in a play called 'Exonerated at this time'. Unzipped, Suzi’s Autobiograpy was released in 2007 and has done extremely well worldwide, getting to number 2 in the Australian charts where she continues to tour. The next tour in 2013 will be her 29th down under. Current release, produced by long time collaborator Mike Chapman, "In the Spotlight" which is now also available in Limited Edition with an extra CD of unreleased Suzi compositions called "In the Dark" and an enhanced CD with a video of "Strict Machine" and the now legendary Suzi tribute to her absolute hero, Elvis Presely, "Singing With Angels", which she recorded in Nashville with James Burton on guitar, and Elvis’s original backing vocal group, The Jordanaires.