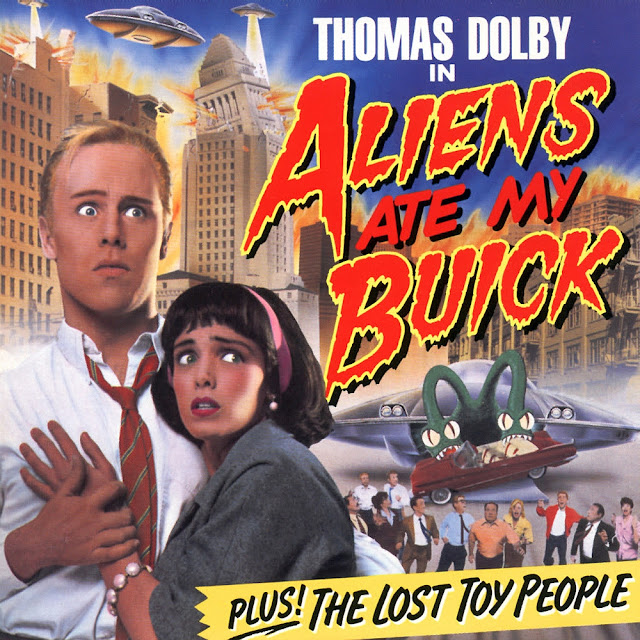 "Aliens Ate My Buick", released in 1988, was the third studio LP release by new wave synthpop artist Thomas Dolby. It peaked at #30 in the UK Albums Charts. The album's sales were disappointing and reviews were mixed. The lead single from the album, "Airhead", peaked at #53. Second and third singles, "Hot Sauce" and "My Brain Is Like A Sieve", peaked at #80 and #89 respectively. In the U.S., the album peaked at #70. Thomas Dolby has said in interviews that he believes the album's commercial failure was due to his change in musical direction, evident on the album. In contrast to the overall introverted nature of his before released album "The Flat Earth", Dolby described his next release, "Aliens Ate My Buick", in the following quote: "I think it's very bold. Some people who've known my stuff from the beginning find it a bit hard to stomach. They think it's a bit brash. It's certainly unsubtle in a lot of ways. It goes for the jugular. There was always a side to the stuff that I did that was very extroverted and wacky. The flip side of the coin was the more atmospheric, moody stuff. There was always room for both of them. But this album, with the exception of maybe one song ("Budapest by Blimp"), is all on the extrovert side". "Aliens Ate My Buick" was strongly funk and dance influenced. The first single was "Airhead", a satirical song about a stereotypical young and rich Californian woman. The second single, "Hot Sauce" was a cover of a George Clinton song. The album was co-produced by Bill Bottrell, and featured Terry Jackson on bass guitar.

Thomas Dolby was born in London, England, contrary to information in early 1980s press releases that reported his birthplace as Cairo, Egypt. His father, Martin Robertson, was an internationally distinguished professor of classical Greek art and archaeology at the University of London, Oxford University, and Cambridge University (Trinity College). In his youth Thomas lived or worked in France, Italy and Greece. He attended Abingdon School in 1975–1976, completing his A Levels while there. One of his first jobs was a part-time position at a fruit and vegetable shop. Thomas Dolby spoke of his early musical experiences in a 2012 interview: "I sang in a choir when I was 10 or 11, and learned to sightread single lines, but other than that I don't have a formal education. I picked up the guitar initially, playing folk tunes from Bob Dylan then I graduated to piano when I got interested in jazz, listening to people like Oscar Peterson, Dave Brubeck, Bill Evans, Thelonious Monk, and so on. The first electronic instruments started to become accessible in the mid-70s and I got my hands on a kit built synthesizer and never looked back". He married actress Kathleen Beller in 1988; they have three children together. His great aunt was noted British Suffragist Margaret Hills.

The Thomas Dolby stage name originated from a nickname that he picked up in the early 1970s, when he was "always messing around with keyboards and tapes". His friends nicknamed him "Dolby", from the name of the audio noise-reduction process of Dolby Laboratories used for audio recording and playback. Thomas Morgan Robertson (jis birth name) chose to adopt the stage name "Thomas Dolby" to avoid confusion with British singer Tom Robinson, who was popular when Robertson began his career. Early publicity implied that "Dolby" was a middle name, and that the artist's full name was Thomas Morgan Dolby Robertson; this is legally incorrect, but he does sometimes informally go by the initials TMDR. After the release of "She Blinded Me with Science", Dolby Laboratories expressed concern regarding the musician's stage name. Dolby's record label refused to make him change his name, and Dolby Labs did not raise the issue again until later. After a lengthy legal battle, the court decided that Dolby Labs had no right to restrict the musician from using the name. It was agreed that the musician would not release any electronic equipment using the name. (Coincidentally, inventor/founder Dr. Ray Dolby had a son named Thomas, now a novelist professionally known as Tom Dolby.)

Early in his career, Dolby played keyboards with Bruce Woolley and the Camera Club and is credited on their debut album. The instrumental track "WW9" in the album "English Garden" is the first recorded example of Thomas' writing. He also wrote Lene Lovich's hit single "New Toy" and played keyboard as part of the backing band for her tour. Dolby played some synthesizer parts on the Thompson Twins album Set and co-wrote "Magic's Wand" with Whodini, and played keyboards on one track ("Love") on Robyn Hitchcock's first solo album, 1981's "Black Snake Diamond Role". Dolby played synthesizer on two tracks on the album "Pleasure" by the band Girls at Our Best!. Around this time, he also formed a short-lived band called The Fallout Club. By far the most significant session relationship for Thomas in the early days was when he contributed the signature synthesizer sound on the track "Urgent" on Foreigner's 1981 album "4". On the same album he played the atmospheric synthesizer intro to the mega-hit "Waiting for A Girl Like You". The fees from this work, including tour dates, bankrolled the studio time for the recording of the 1980s benchmark album "The Golden Age of Wireless" from which his solo career began.

In October 1981 Dolby made an appearance in the video for the Dave Stewart and Barbara Gaskin British number one cover of "It's My Party", playing the part of Johnny in the "Judy and Johnny just walked through the door" section of the song. The video made its first Top of The Pops appearance on 29 October 1981. Dolby also worked as session keyboard player on Def Leppard's 1983 Pyromania album. Dolby appeared on Pyromania using the alias Booker T. Boffin, as his affiliation to another record label restricted the use of his real name. In 1985, Dolby appeared at the Grammy Awards, which were televised, along with Stevie Wonder, Herbie Hancock, and Howard Jones. All four musicians were successful in the mid-1980s music scene, and they were also all keyboard and synthesizer experts. That same year, Dolby performed at the Live Aid concert in London as part of David Bowie's band.

While best known fpr his musical works, Dolby successfully established the Headspace company in 1993. Headspace developed a new downloadable file format designed specifically for Internet usage called Rich Music Format with the RMF file extension. It had the advantage of small file size like MIDI but allowed recorded sampled sounds to be included at a higher bitrate for better overall reproduction. RMF music files could be played in a browser using the free Beatnik Player plug-in. Later versions of RMF permitted artists to place an encrypted watermark in their files that were supposed to prevent unauthorised duplication. In 1999, Headspace, Inc. was renamed Beatnik, Inc., and specialised in software synthesizers for mobile phones, which it licensed to mobile phone manufacturers including Nokia. Beatnik is no longer in business. While still remaining on the Beatnik board, Dolby stepped down from his position as CEO to pursue other technologically innovative interests, such as founding Retro Ringtones LLC in 2002, which produces the RetroFolio ringtone asset management software suite for companies involved in the mobile phone ringtone business. At the second annual Mobile Music Awards, Miami, Florida, in 2004 RetroFolio won "Best of Show" and "Best New Technology" awards.

Dolby's musical talents have also been put to use creating hundreds of digital polyphonic ringtones on mobile phones, including the polyphonic version of the infamous Nokia signature theme. He is often a major speaker at technology conferences such as Comdex, Websphere, and Nokia. From 2001 to 2012, Dolby acted as Musical Director of The TED Conference, an annual event held first in Monterey, California, and subsequently in Long Beach, California. In this capacity he provided live musical introductions to sessions, sometimes with a TED House Band, as well as helping secure guest musicians and entertainers for the event. Onstage, he played with singers and performers such as Eddi Reader, Natalie MacMaster, Rachelle Garniez and David Byrne, and premiered his own song "Love Is a Loaded Pistol" onstage at TEDGlobal 2010. He retired from the post in September 2012 to pursue music. In March 2012, Dolby spoke at the DESIGN West conference in San Jose, California at the McEnery Convention Center, produced by UBM Electronics. In March 2014, Dolby was named Homewood Professor of the Arts at Baltimore's Johns Hopkins University. In March 2017, The Peabody Institute announced Dolby would lead a new four-year undergrad degree program, Music for New Media, welcoming its first undergraduate cohort in fall 2018.