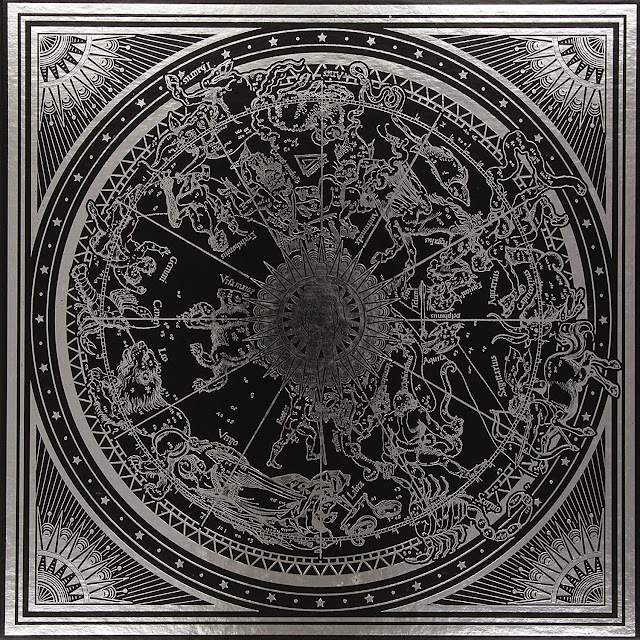 As the first in a two part companionship album revolving heavily around religious critique and a humanistic (and quite often negative) study of the Christian faith, "Heliocentric" represents the beginning of a new era for Germany-based post metal act The Ocean. While I had listened to "Anthropocentric" (the second half) before this one, I was already a fan of this band's complex and intelligent music from the 'Precambrian' days onwards, and my expectations were high for the next album. This band has always been prone to take on the most ambitious topics ("Precambrian" revolved around the creation of the Earth itself) and "Heliocentric" is no exception to this rule. A deeply thought-provoking concept by all standards, "Heliocentric" does ultimately disappoint my high expectations however. While the album is graced with some brilliant moments and lyrics that will surely upstart more than a few existential debates, the band's new direction does feel basic and less effectively executed than some of the great albums they have released in the past.

With a new vocalist here, the sound of the band is obviously changed a fair bit. While the abrasive growls are the same as they have always been (that is, a mixed bag), the introduction of Loic Rossetti is one of the more skilled singers the band has seen through its revolving door of musicians. However, while "Anthropocentric" shows the singer's talent in an excellent light, "Heliocentric" feels as if it stretches the vocalist's style in the wrong direction, usually towards a more abrasive direction that could vaguely be compared with the harsh style of Metallica vocalist James Hetfield. Ironically, many aspects of The Ocean's music have actually become much more melodic and harmonious since the atonal and unsettling sounds of 2007's "Precambrian". Even going as far as to have a piano-driven ballad like "Ptolemy Was Wrong", "Heliocentric" does see the band going in a slightly less complex direction with their music, and that did often feel to me like The Ocean's greatest strength; their meticulously crafted arrangements. Songs like "Metaphysics Of The Hangman" are driven by chorus structures, and while this doesn't necessarily mean that the music will be worse, in The Ocean's case, it does. Mixed results on Rossetti's new vocals,some inconsistent writing, and a more accessible direction? Doesn't sound good, but the album is far from being poor, and still sports a good deal of strengths.

First among the positive aspects of "Heliocentric" is the lyrical content and concept. On an even calibre with "Anthropocentric" here, the lyrics generally revolve around the Church's resentment towards science, as well as to debunk Creationism (a theme further developed with the second part) and question the existence of a divine entity. While this will offend some Christian listeners surely, the lyrics are written quite tastefully, touching upon the subjects through a poetic, often metaphorical language that really becomes the highlight of the album. The Ocean's "Heliocentric" is certainly one of the weaker points of The Ocean's career, especially considering when the band has had such success with releasing absolutely phenomenal records. in the past. However, tracks like "Firmament" and "The Origin Of Species" and a few others provide a great listening experience typical of the band's output. While the album did not reach my expectations however, it would pave the way for "Anthropocentric", which is the real masterpiece to be spawned from this project.

With 2007's "Precambrian", The Ocean (also known as Ocean Collective) came out with a two disc concept epic concerning nothing less than the turbulent creation of the planet Earth. To follow up something so vast, 2010 witnessed the band now releasing two companion albums, each dealing with such topics as the creation of man, the idea of god, and religion. Suffice to say, The Ocean are never short of ambition in the projects they choose to take. While the critique of religion and faith is as ripe a concept as any for a metal album, "Heliocentric" did end up being a bit of a disappointment. Luckily, the second installment in this chapter of The Ocean turned out to be quite a return to power for the band. With "Anthropocentric", The Ocean releases one of their most potent efforts yet, with a concept and lyrical content as profound and fiery as the music it is driven by. When speaking of the sound of this album, there is definitely a more conventional melodic sense here (like "Heliocentric") than there used to be, in no small part due to the addition of new vocalist Loïc Rossetti, whose clean singing is featured quite prominently here. However, unlike "Heliocentric", very little of the heaviness and experimentation is relinquished, and there is a very good balance between the heavier vocals and lighter melodic singing. With many of the songs, the clean vocals make some pretty catchy and memorable hooks, but luckily don't feel superficial by doing so.

The title track leads off the album in full force; a nine minute episode of sludgy heaviness, mixed with rhythmic experimentation. While the track begins in a very typical, atonal style for The Ocean, the differences and developments start to be heard when the clean vocals come in, three and a half minutes into the album. In direct contrast to the brute growls, the vocals are often beautifully harmonized, although some of the more stylized singing of Loïc Rossetti can get a tad nasal at times. At least as far as the first track is concerned, the highlights reside in the beautiful mellower moments, where The Ocean gets to properly show their new grasp for great melodies. Another highlight of the album is the single-worthy "She Was The Universe", which is a memorable powerhouse from start to finish, despite being highly rhythmically irregular. Along with many of the songs here, the chorus is kept quite melodic. Other noteworthy songs include "The Grand Inquisitor III", which is the most 'out there' track on "Anthropocentric" - an electronic trip-hop acid tweak of an interlude- and "Wille zum Untergang", a very post-rockish track that showcases the band's more ethereal nature. The only song here that isn't excellent is "Sewers Of The Soul", which keeps a relatively up- tempo, rock vibe without showing the same compositional complexity and intricacy of the rest of the album.

Lyrically, the material here is bound to cause some controversy, especially among the more religiously-inclined listeners. As was true with "Heliocentric", "Anthropocentric" is a harsh, to- the-point critique of Christian fundamentalism and hypocrisy. Philosophical opinions aside, the subject matter is intregated well into a sort of intellectual and thought-provoking poetry that's sure to stir up some debate amongst metalheads. "Anthropocentric" may very well be a rival of "Precambrian" for The Ocean's greatest work to date. Despite having one or two songs that feel a bit less inspired than the rest, "Anthropocentric" is a true definition of the 'thinking man's metal'; highly complex and frenetic sludge metal, mixed with a truly ambitious scope. An interesting album, The Ocean's mastery of aesthetic and innovation is readily evident in spades.