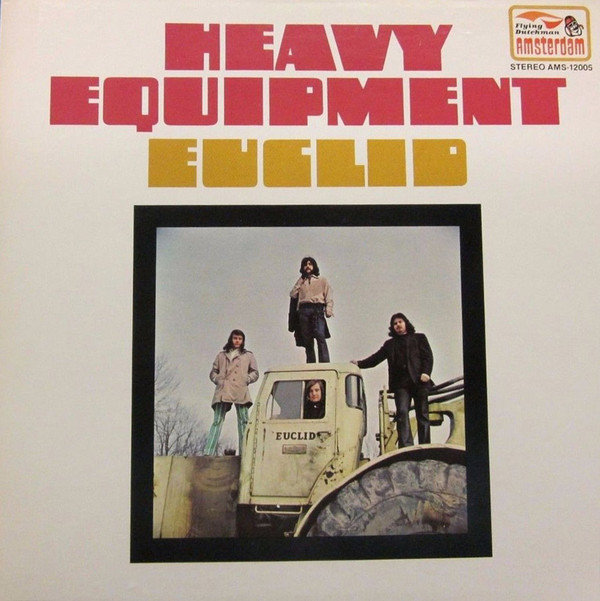 Euclid's one and only album is among the very best of the late 1960's - early 1970's heavy rock albums of all time. Based out of Haverhill, Massachusetts, the musicians themselves come from a diverse New England garage & psych-rock background. Bassist Harold Perino Jr. (aka "Maris"), came from The Ones, a central Mass. garage band who also had a rare garage LP on the Ashwood House label. The other members were from southern Maine. Garage rockers Gary Leavitt on lead vocals & guitar, and his brother Jay Leavitt on drums were in the Cobras together. Ralph Mazzota from the psych-tinged Maine group Lazy Smoke is outright dazzling on blistering lead guitar.

Pedigree aside, this is a powerful and inventive psychedelic heavy rock album that stands on its own as a great work. Euclid was signed to Bob Thiele's Flying Dutchman Records subsidiary label, Amsterdam Records, distributed by Mainstream Records, and was one of the few, if not only "rock" releases on either label (a notable exception being the rare Minx soundtrack by The Cyrkle). With its tremendous rumbling in-your-face riffing fuzz guitars; screaming solos, backwards bits, thick fuzz bass, pounding drums and oddly-effected vocals, the album, produced by the legendary Bobby Herne, with finishing touches to the mix by Les Paul, Jr; stands proudly with one foot in the 1960s & one in the 1970s, crafting their sound with a heavy-handed metallic attitude.

One of the coolest things about this album is the overall evidence of the various background influences brought in by each of the group members. In Euclid, you get the very best of it all. You have the raw & ferocious high energy garage element mixed with a very clear and real psychedelic conviction of the drug saturated times. These characteristics combined with a new heavy/hard rock discipline & focus, resulted in one of the best early heavy rock albums ever recorded in the United States. The combined members' various instrumental contributions are equally matched by their amazingly supportive crystalline four-vocal harmonies. The background vocal quality is quite effectively offset by the lead vocals "take no prisoners" brutal male vocal styling. Bobby Herne's production on this record, with lots of twists & turns, is absolutely top notch and gives the music its deep unstoppable heavy forward momentum. The first track is a real winner, clocking in at over 11 minutes, blasting forth with super heavy monster riffs.

Gary Leavitt, Bobby Hearne, and Maris have all passed on due to various circumstances over the years. Gary Leavitt was killed in a 1975 motorcycle accident, which effectively ended the band, who were a popular live attraction in the Northeast up until then. Jay Leavitt still performs occasionally with his group Bluezberry Jam in the Maine area. The Leavitt brothers along with Bobby Herne, first appeared together in 1966 as the Cobras, releasing the New England garage classic "I Wanna Be Your Love" bw/ "Instant Heartache" on the Big Beat label, one of the most incredible and out of control garage 45's ever recorded.