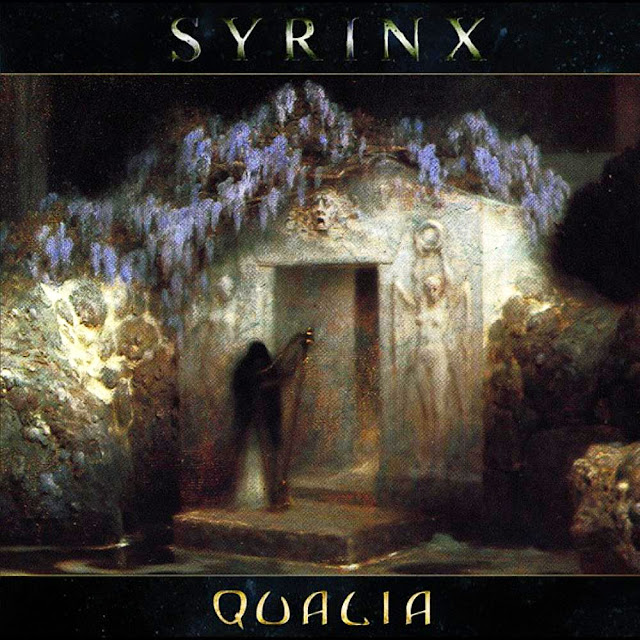 Syrinx is a side project of mainly guys from NIL: David Maurin on acoustic guitar, Benjamin Croizy on keyboards and Samuel Maurin on bass accomplished with Philippe Maullet on drums. The alliance took place already at 1999 when they decided to create music of new form. At first they remained anonymous: ''They work together to attain a common goal which bears the name of Syrinx: thus, the name and career of each musician are unimportant'' and they named the band as Syrinx: ''Syrinx normally designs a nymph from Greek mythology. This concept does not belong exclusively to this mythology. It not only existed before it, but it exists to this very day. Syrinx, then, is the origin of this music". According to the band, the form of their music is Metamorphic Music fulfilling three conditions: 1) It is constructed on rhythmical and melodic themes which develop, change, and metamorphose in a subtle way into other themes. Depending on the effects intended, this process is more or less perceived by the listener. If this metamorphic construction is elaborated correctly, it can lead to the two following consequences: 2) It induces a special interior state in the listener. In fact, all music influences our movements, our emotions and our will-power, whether we are conscious of this or not. Syrinx' music is precisely conceived in this sense to operate an internal transmutation, an interior metamorphosis of the listener. 3) In the place where it is played, it creates a sort of climate: it contains in itself all that is necessary to be able to catch on progressively in the physical area where it is propagated. After the music has stopped, it still impregnates the area. A sensitive person can feel this phenomenon, even if he or she were not present at the time of its diffusion.

What do you get when a fabulous acoustic guitarist meets up with a spectacular drummer ? Well, after nailing a mellotron-mad keyboardist (is there a more glorious sound than acoustic guitar and the mighty 'tron ?) and enlist a bass player with rolling fingers and you wind up with a French quartet named Syrinx. On their sophomore 2008 effort Qualia, the band expands their thematic instrumental only approach, calling it "Metamorphic Music", a textured canvas on which the musicians simply layer on details that delve deeply into incredible mutations, a clearly jazz-rock fusion that swerves into dense symphonics on a dime, the splendid David Maurin acoustic guitar in the spotlight. His likely brother Samuel Maurin supplies strenuous bass excursions, closer to Weidorje's Paganotti in that it's up- front and very center, like a musical spinal cord. Ivoryman Benjamin Croizy colors intensely with mostly the afore-mentioned mellotron but also tosses in some sparkling e-piano, rolling organ and somewhat metallic synthesizer ornamentations. The music is not far from fellow French acts Priam, Taal, Xang, Nebelnest and Nil (all three players save for the drummer were members of this legendary Annecy band) as well as obvious King Crimson tendencies (the mathematically precise bicycle acoustic guitar a la Fripp) , while drummer Phillipe Maullet could easily nail a Bill Bruford audition.

If you have any lingering doubts about my sanity, you need to protect yours upon feasting your ears on the opening masterpiece "Liber Nonacris", a nearly 20 minute python track that will slowly engulf you whole and digest you later! Tempestuous, at times veering toward insanity but somehow exceedingly controlled, or better yet, controlling, the delivery is breath- taking and audacious. This has to be one of the best epic instrumentals ever in progland. Fans of every stripe would find glee in the recipe, where blistering technique meets vaporous Gothicism. There are undeniable hints of eerie schizophrenia, emotional discomfort, obtuse irrationality and a yearning for some sort of salvation. Creepy, in a good way. The style can also morph into quasi-soundtrack-ish mode, as if the band was commissioned for some spectral horror movie, "Acheiropoietes" is a moody, somber and unforgiving canvas of sound. Led by a soprano saxophone that has no handcuffs, the piece at first is perhaps the jazziest here, very stop/start and stark. Cemetery anthem, binary for quite a while and then, BOOM the mellotron takes this into much more pleasant surroundings, lush and symphonic. A few simple drumstick moves and the mood becomes chaotic again. Like a crazed rat caught in a labyrinth, there I no possible escape, move forward at your peril or retreat into doom. All along the victorious bass keeps the acceleration gasping for air.

On the massive and over 14 minute long "Le Grand Dieu Pan", after a simmering piano intro where complacency and occasional cello eruption rule the day, the churning organ takes over leadership duties and, for all intended purposes, does not let go until the end, ably assisted by the wild guitar and manic drumming. Croizy then audaciously administers some synthesized fantasy, the bass burping along like some doped-up nurse, raising the angst to improbable levels of tension. Somber piano and grave flute combine to further the despondence. Pan is the Greek god of the shepherds and flocks, nature of mountain wilds, hunting and pastoral music, and companion of the nymphs, so its presence here is self- evident within the context of the song. Eventually, the arrangement is guided into a more symphonic complexion, the guitar and the bass getting very technical, the drums highly syncopated and poly-rhythmic. The piano returns majestically, with profound seriousness until they all explode on their instruments, Samuel in particular getting nasty on his four stringed monster. Just tremendous talent on display here, this is music you can enjoy as a whole or in part, following each instrument individually. Darn, I love that many options.

The brief five minutes finale is a wordplay on the "21st Circle" instead of century (hmm, never thought of that) but in fact, just a mellotron-infested ditty with great intensity and a strange growling slash (that devilish bass and effects) , David delivering a supersonic acoustic foray that would make Andres Segovia proud and Maullet pounding his heart out. The King Crimson influences are loving and overt but that jazzy craziness is just to expunge over. Tremendous listening experience. Gorgeous artwork. A classic.