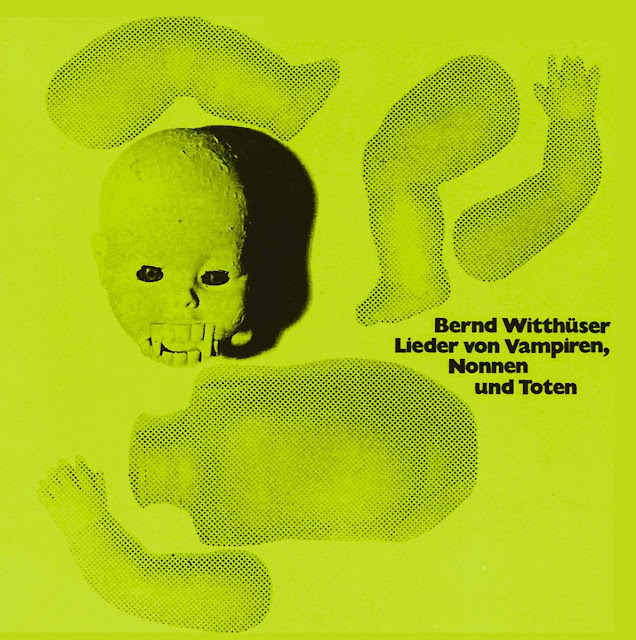 "If I’d perform in front of miners and sing about how we’d sweat because of the exhausting mining-work the miners they’d laugh about me, since I haven’t gone to work for more than two years". Bernd Witthüser refused to be received as a political folk-singer for the working class. From 1964 up to 1969 the folk-festival at Burg Waldeck (in the Hunsrück mountains) played an important role for the development of a musical underground in post-WW-II-Germany. The music performed there offered an alternative to the German Schlager and was influenced by the American and French folk music, but even more important than that musical references was a very strong Marxist tradition that the new generation connected with (Bertolt Brecht functioned as an important role model). Not unlike Pete Seeger in the U.S., folk music was considered to be not only the voice of the people but something to educate people with, raise people’s consciousness, teach them about society etc. "We shall overcome".

That highly political (and arrogant at times) approach often led to controversial events. Not unlike Pete Seeger attacking Dylan’s amplification with an axe, there were similar incidents at Burg Waldeck. For example there was the time Rolf Schwendter disturbed Reinhard May’s concert with a snare drum, because May’s songs weren’t political enough for Schwendter’s taste. As a result to the politicised/political climate during the late 1960’s the festival turned out to be dominated by discussions and teach-ins and all these incidents/discussions during these years were as necessary as self-centered: On the one hand the festival and its music/musicians worked as an instrument to politicise people – on the other hand the privileged middle-class kids had to learn that the “revolutionary subject” (i.e. the working class) they were talking about/looking for was somewhere else: at work, and not at a hippie-festival in the Hunsrück mountains. As a consequence in 1969 the preaching to the converted came to an end (the festival was put on hold until 1973) and the folk-music-scene disbanded and headed off to different shores.

Some of the folk musicians referred to the psychedelic music as a druggy escape-route from a reality that needed to be changed (and because of drug-use remained unchanged), some referred to the psychedelic aesthetics as a way to enter the doors of perception, as a first step towards a new society. The crucial point (still): s smoking pot revolutionary or counter-revolutionary behaviour ? By 1968 Bernd Witthüser had already had some local success as a protest-singer, but he didn’t want to sing about mining when his everyday life was more about smoking pot and reading poetry. It seemed ridiculous to him.

Instead of performing the working class hero he chose to sing about vampires, nuns and the dead. Influenced by medieval and romantic poetry (like Novalis and Heinrich Heine) he recorded a gothic-folk or folk-noir record for Rolf Ulrich Kaisers Ohr-label (with whom he had also worked before when he managed the “Essener Songtage” in 1968). But it wouldn’t be a Witthüser (& Westrupp is on board already, too) record without a good measure of goofy jokes included: The last song on the record is an adaption of the theme tune from the TV-series 'Flipper' and until that last song a lot of - more or less - funny wordplays and gags come with a lot of the songs on "Lieder von Vampiren, Nonnen und Toten". But the all in all frivolous approach is a good thing, actually. Otherwise "Lieder von Vampiren, Nonnen und Toten" would be an unbearable proto neo folk disaster. But Bernd and Walter had a reefer once in a while and their daily dose of Marihuana kept them away from turning into morbid youngsters longing for death.

It’s quite difficult to write about the music on "Lieder von Vampiren, Nonnen und Toten" without thinking of the lyrics all the time. And being a native speaker of the German language I wonder how the record is received if you don’t get the lyrics (which is - the other way round - in 99,9% the case for all the Anglo-American music Krauts listen to). "Lieder von Vampiren, Nonnen und Toten" is a lovely, unadorned folk music record garnished with a lot of humour and a slightly psychedelic vibe. Mostly guitar and voice, with a bit of percussion, a flute, a trombone and stuff like that here and there. Imagine Cheech & Chong singing Current 93.

After "Lieder von Vampiren, Nonnen und Toten", Witthüser & Westrupp went on to perform and record as a duo and they released three studio-records ("Trips und Träume", "Der Jesuspilz" and "Bauer Plath") and a live-record ("Live ’68-’73"). It’s all about smoking pot, making fun of authorities, daydreaming and enjoying life, basically. Not sure, if this can be considered as a revolutionary agenda, but for a few years it seemed to work - and they both remain swinging until this day.