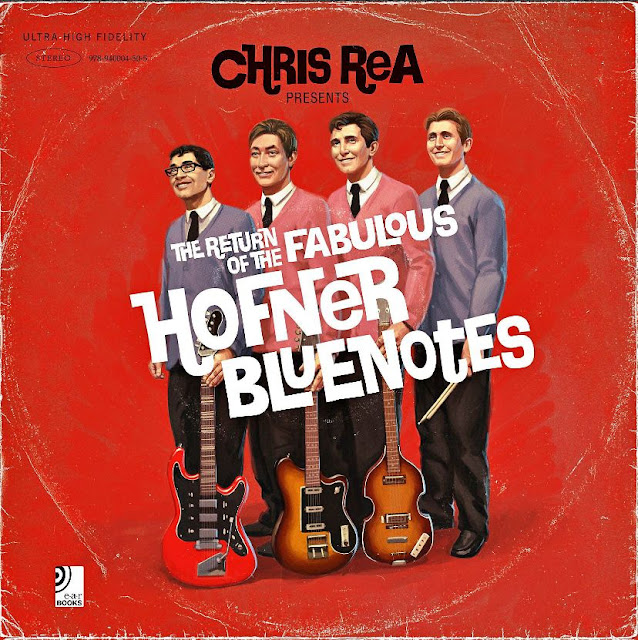 "The Return of the Fabulous Hofner Bluenotes" is the twenty-second studio album by British singer-songwriter Chris Rea, released in 2008 by his own record label, Jazzee Blue. It comprises three CDs and double 10" Vinyl records in an 80-page hardback book. It is the second album of his project, the Hofner Blue Notes (2003). The project narrates the history of The Delmonts, an imaginary guitar instrumental band from the late 1950s, who in early 1960s evolved into blues band The Hofner Bluenotes. It also gives a brief history of the Hofner guitar, and its importance in the development of music in Britain. The book is lavishly illustrated with period photos and mocked up posters and newspaper cuttings about the band, together with some of Rea's paintings, and photos of Hofner guitars. The music was recorded by Rea (guitars), Colin Hodgkinson (bass) and Martin Ditcham (drums), who feature in the book, together with Niel Drinkwater and Robert Ahwai.

After the album was released, Rea started a European tour, including a show at London's Royal Albert Hall and Newcastle City Hall. He and his band would perform as a quintet The Fabulous Hofner Blue Notes. The concerts were divided in three sections: in the first, they would play only songs from Delmonts (CD1), then some blues songs from Fabulous Hofner Blue Notes (CD2), and in the third part Rea's greatest hits. In The Independent review was rated 3/5 stars. Alexander Cordas writing for laut.de gave it the same score, stating that The Delmonts music from the first CD is not for everyone because the homage "is entertaining, but rather in the sense of a winking glance towards the past", while The Hofners sometimes does not convince because it has "every now and then cliché-drenched" tracks which "sound neither dirty in the bluesy sense, nor exciting in their compositional aspect", concluding that "the overall package of the Hofner Bluenotes appeals with its appealing exterior".

Artist and painter, blues aficionado and self-confessed motoring nut, filmmaker and Italian-influenced classical music composer, eclectic and maverick are two terms that hardly come close to describing a man who has sold more than 30 million albums worldwide for just being himself. Recent years have seen Rea publicly celebrating many of his passions – including Santo Spirito, a release containing two feature-length films on DVD (written and directed by Rea), two accompanying CDs of the soundtracks, and one regular CD of studio album songs, Blue Guitars, an eleven CD collection of 137 blues inspired tracks with his own paintings as album covers, and La Passione – a deluxe box set featuring Rea’s extraordinary soundtrack to his own short films about the legendary motor racing driver Wolfgang Von Tripps (together with a documentary made up of Von Tripp’s personal cine film archive and a 70 page coffee table book including Rea’s photographs and paintings) – but 2017 sees Rea return to what he’s best known for: an album of gorgeous rock ballads which showcases Rea’s unique voice and a songwriting skill at the top of his game. The album is called Road Songs For Lovers and it is possibly his finest record to date.

Born in Middlesborough in 1951, Rea released his debut album, Whatever Happened To Benny Santini – the title is a nod to the stage name, Benjamin Santini, Rea sarcastically created to appease his record label – in 1978 and promptly had a huge US hit with the first track to be lifted off the record, Fool If You Think It’s Over. Whatever and Rea’s follow up Deltics were produced by Elton John’s main-man, Gus Dudgeon, and it was no doubt the sound that Rea and Dudgeon created together that led to Rea being widely regarded as an artist in the style of Elton John and Billy Joel. Naturally, Rea was unhappy with the misdiagnosis but he could do very little to prevent his next two albums, Tennis and Chris Rea failing to produce any hit singles. In 1983, Rea’s fifth studio album Water Sign sold over half a million copies after I Can Hear Your Heartbeat, a single lifted from the record, became a Top 20 hit all over Europe. Rea’s follow up, Wired To The Moon was also a huge success and attendant tours of Europe would ensure that Rea commandeered a significant fan-base. In 1985, Rea released Shamrock Diaries and two songs herein, Stainsby Girls (about an abandoned hamlet near Middlesboro and the school named after it) and Josephine, suddenly connected with British audiences: subsequent releases, On The Beach and Dancing With Strangers went platinum, the latter marooned at No.2 behind Michael Jackson’s Bad. Rea’s next two albums The Road To Hell and Auberge would become his first No. 1 albums in the UK whilst God’s Great Banana Skin and Espresso Logic quickly went Top 10.

1998 saw the release of the Top 10 album, The Blue Café, and the following year, Rea released an electronica album called The Road To Hell Part 2. In 2000, Rea’s, King Of The Beach reached the Top 30 but his well-documented illness meant that he took a brief sabbatical from recording before returning to his blues roots with Dancing Down The Stony Road in 2002. Rea then set up his own independent label, Jazzee Blue, and further blues-tinged releases included Blue Street (Five Guitars) and Hofner Blue Notes in 2003 and The Blue Jukebox in 2004. A year later he released the groundbreaking Blue Guitars album. In February 2008, for the release of The Return of the Fabulous Hofner Blue Notes (comprising 38 new tracks on three CDs and two vinyl copies plus a hardback book of his paintings) Rea dreamed up a band – a pastiche instrumental group from the late 1950 called The Delmonts – and toured the UK (including the Albert Hall) introducing his band as The Delmonts. A year later, Still So Far To Go, a best-of compilation reached No.8, turning gold in the process, before Santo Spirito Blues cemented Rea’s place in the pantheon of musicians that follow their own artistic vision – think Elvis Costello’s Almost Blue/Imperial Bedroom period – at the expense of commercial concerns. A stunningly repackaged version of La Passione (initially released in 1996) would appear in 2016 accompanied by an exhibition of Rea’s hugely expansive paintings (inspired by the project) at the RAC in London.

It’s been quite some time since Rea released anything “mainstream” or non blues-oriented and the rather good news is that Road Songs For Lovers is Rea’s best record to date. Recorded with Rea’s own band at Metropolis Studios in London – in contrast to recent albums which have been self-produced in his home studio – the record continues Rea’s obsession with travel and motion; songs like The Road Ahead (the first single off the album), Happy On The Road, Last Train and title track, Road Songs For Lovers ostensibly suggest that we are constantly going somewhere in our lives and no doubt require a musical soundtrack to document this movement. Rea’s uniquely warm and distinctive sound is abundantly present and correct throughout the recording and on Angel Of Love he approaches greatness: “I’m the king of the highway code/I need a slow song so I can dance in your heart/ everybody got their tales of woe/everybody got their cross to bear/I’m a restless soul in a traveller’s tale” he gently opines and you are reminded just how beautiful Rea’s voice can be at times. The song is one of the most moving on Road Songs For Lovers but its heartbreaking nature is not out of place on an album that regularly tugs at the heartstrings: Breaking Point is a poignant tale of love gone awry – “Last time we saw him, he had nothing much to say/Now I guess we’ll never know – the breaking point” – whilst Beautiful is utterly compelling, piano and sax hugging Rea’s desolate though delicately nuanced vocal delivery. And we defy anyone to not be moved by these sentiments: “Beautiful that’s what you are to me/no matter what they say, it’s what you’ll always be/ love calls your name and I must follow where it goes/ Because you’re beautiful is all that I can see, although there is no chance for love and we must set each free/I’ll always hold you deep inside me, you’ll always be …Beautiful".

Chris Rea is not alone in the company of musicians who found fame later in life – think Jarvis Cocker, Leonard Cohen – and indeed it is interesting to note that he didn’t achieve UK Top Ten single status until the release of The Road To Hell (pt2), a record that was actually his eighteenth chart entry. Perhaps it is this fact that makes Rea such a breath of fresh air and a man effortlessly in control of his own faculties as a singer songwriter. “I was never a rock star or pop star and all the illness has been my chance to do what I’d always wanted to do with music,” he says. “The best change for my music has been concentrating on stuff which really interests me.“ He is obviously referring to his love of motor racing, painting and the blues but if Road Songs For Lovers proves one thing it is this: you can add beautiful, poignant rock ‘n’ roll love songs to that pantheon of passions.