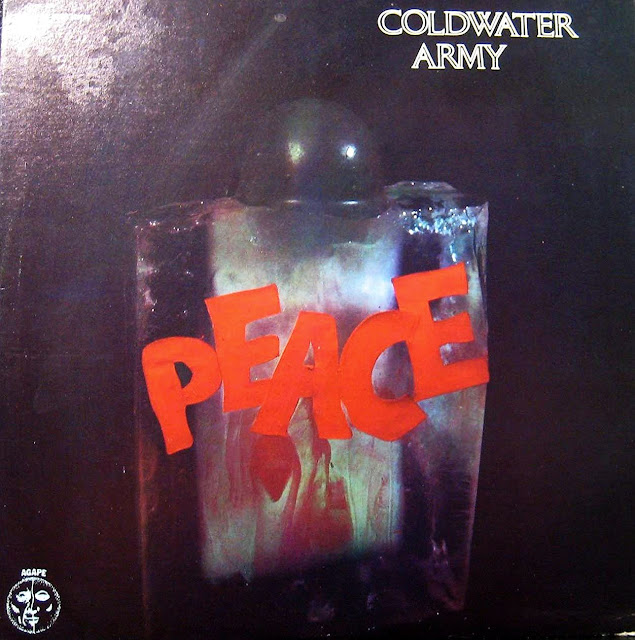 Singer/guitarist Bobby Golden and his older brother/bassist Kenny Golden grew up outside of Macon, Georgia. While in their teens, they started forming and playing in local bans such as The Golden Boys and The Golden Arcade. By 1969 they'd expanded their repertoire beyond top-40 covers and soul revue, to include original material as the Coldwater Army.  I'm guessing the name was inspired by the American temperance movement, though it was interesting name choice for a band that was formed near Warner Robbins Air Force Base.

1971 found Coldwater Army signed to the Nashville-based Starday-King affiliated Agape label. With a line-up consisting of singer Bob Garrett, lead guitarist Bobby Golden, bassist Kenny Golden, drummer Richard Hughes, trumpet player Nick Jones, sax player Dale Miller, and keyboardist Bob Spearman, the band went into the studios with producer Bobby Smith.  Allowing an unknown band to record an album of original material seemingly reflected one of two things- Agape had significant faith in the band's commercial potential or, 2.) Agape had no interest in the band. Having listened to Coldwtaer Army dozens of times over the years, my guess is the latter category.

Not that you're going to find a lot of on-line reviews for this obscurity, but the ones you'll stumble across routinely tag this one as Southern rock. On tracks like "Dreams" and "Today, Tomorrow, Yesterday" there were clearly Southern rock influences, but don't be mislead, this really wasn't a Southern rock album. Remember that when the album was recorded, the majority of the band members were still in their late teens. They had come out of bands that focused on top-40 and soul covers so originality wasn't something they'd necessarily gotten around to. That made much of this album one of those fun, spot-the-influences collections.  It's all here - Blood, Sweat and Tears horn charts, Chicago blues-rock ("Away"), even Paul Revere and the Raiders top-40 ("Smiling Faces").

"Dreams" starts with a funky little guitar riff, "Dreams" found the band dipping their collective toes into the blues-rock arena - imagine a hybrid of The Allman Brothers and The Atlanta Rhythm Section, awesome track. "To Pamela" is a hyper-sensitive ballad that included a touch of Cream influence in the middle of the song. The bouncy, blue-eyed soul-ish "Hey People" is most commercially feasible song. Imagine The Young Rascals had they grown up in Macon, Georgia rather than New Jersey. I'm not a big fan for social relevancy, but I'll make an exception for this one. The lyrics may not have been the most subtle you've ever heard, but kudos to an early '70s  Southern band being willing to taken on the subject of equality. Always liked Golden's melodic solo on this one.

"Today, Tomorrow, Yesterday" was a nice baseline for another sound of spot the influences - My answer was Spooky Tooth's "Evil Woman" meets The Dixie Dregs. Again, not particularly original, but I liked Garrett's growling vocals and the song's jamming flavor. "Smiling Faces" was a radio-friendly pop ballad that could have easily slotted on a Paul Revere and the Raiders album. Seriously, the lead vocal actually reminded me of Mark Lindsay. Very catchy refrain. Penned by drummer Hughes, "In Thought" was another Bobby Golden and Bill Spearman-powered rocker. Complete with lots of church organ, the lyrics also seemed inspired by the loss of their friend David Allen.

Powered by some of Spearman's prettiest keyboards and Golden's sustained fuzz guitar, "Time For Reason" probably came the closest to showing off the band's true musical orientation. With a haunting, slightly lysergic edge, once again, Dale Miller's jazzy, discordant sax solo was at odds with the rest of the song, but it was such a strange juxtaposition that it was kind of neat. Shame the song faded out so early. With little promotional support from their record label, shortly after the album was released, the band split up.