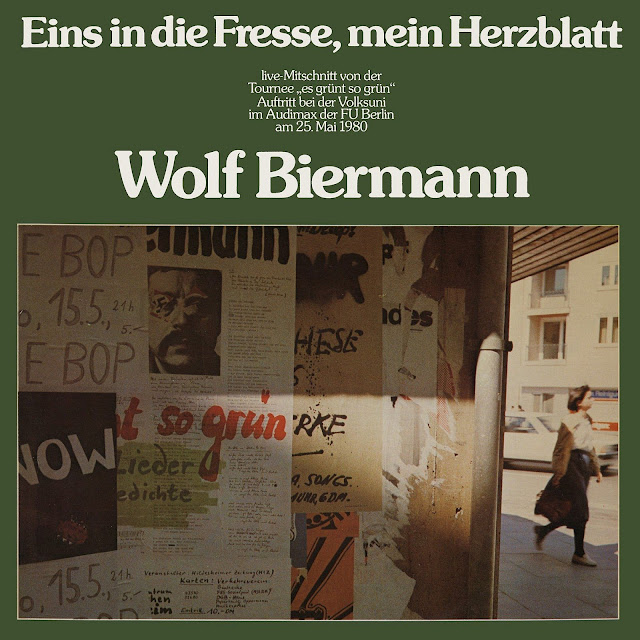 Writing about Wolf Biermann is a complex task. This German singer, songwriter, and poet can be called the most famous, controversial, loved, and hated artist of post-war Germany, a scathing critic of the "real socialism" which eventually collapsed at the end of the '80s. He may in some way be called the "Bob Dylan of Germany," but with two significant limitations: Unlike Dylan, Biermann never flirted with religious feelings and he never crossed the bridge to rock music, but remained a non-electric solo performer with acoustic guitar.

Biermann is of Jewish origin, his father, a communist, was killed by the Nazis in the Auschwitz concentration camp in 1943. Full of socialist ideals and new hope for a better Germany, Wolf Biermann left his hometown, Hamburg, and settled in what was then the German Democratic Republic (GDR), the communist eastern part of the divided Germany, in 1953. There he tried to start a career typical for many of the East German young generation by studying socialist economics in East Berlin. Soon, however, he realized that this shoe did not fit him too well and he aborted his studies. Around this time, he had discovered that he was a man of the theater, and as a result, he became assistant stage manager at the renowned Berliner Ensemble in 1957. This theater company had been founded by Bertolt Brecht (1898-1956), who had died just one year before Biermann started working there.

In 1959, however, Biermann decided to quit his theater job and enrolled again for studies in East Berlin, this time philosophy and mathematics. In a struggle to get a play he was directing at the university past the censors, he made the acquaintance of the composer Hanns Eisler (1898-1962), whose music Biermann had come across during his time at the Berliner Ensemble. Eisler had worked with Bertolt Brecht during their exiles in the United States. Eisler realized the genius of the young Wolf Biermann and encouraged him to write poems and songs, and Biermann acknowledged later on that Eisler's composing techniques had a big influence on his own songwriting. It was also Eisler who exposed the young songwriter to the GDR public for the first time, but in a monolithic state, the fate of this newcomer, who in his lyrics radiated sassiness à la Francois Villon (1431-1463) and wit à la Heinrich Heine (1797-1856) based on a dramatic craftsmanship à la Bertolt Brecht, was doomed from the beginning. In the very early songs of Biermann, the cultural bureaucrats could already sense rebellion.

Bertolt Brecht's credo had always been "to think and write in lively conflicts," and in this sense, Biermann saw himself as a true pupil of Brecht. Sponsored by Hanns Eisler, he decided to transform this motto into action by establishing his own theater, the Berliner Arbeiter- und Studententheater (Berlin workers' and students' theater), in 1961. The first play he wrote and directed was about erecting the Berlin Wall, a crucial historical event which had taken place the same year, and it was the first time Biermann generated a "lively conflict" with the "powers that be" of the GDR. Subsequently, the play's performance was banned and the theater eventually closed down in 1963. After the forced closure of his theater company, Wolf Biermann refrained from theater stage production and focused on his career as a writer and singer/songwriter. His first poem anthology, Liebesgedichte, had already been published in 1962. In the same year, his application for membership in the East German communist party was declined and probably contributed to his first serious disillusionment with the ruling communist ideology. 1963 also marked the beginning of his friendship with Robert Havemann, a professor of chemistry in East Berlin and one of the leading dissidents of the GDR. All in all, the tone of his lyrics became more and more critical towards the ruling regime, and a clash between the two sides was inevitable. Without the strong support of Hanns Eisler, who had died in late 1962, things turned out to become much more difficult in the constant struggle against the self-appointed cultural bureaucrats of the GDR.

In 1964-1965, the conflict between the artist and the authorities eventually escalated; Biermann gave his first performances in West Germany and earned his first critical acclaim there. His first record release, "Wolf Biermann (Ost) zu Gast bei Wolfgang Neuss (West)" (1965), a collaboration with the West German political satirist Wolfgang Neuss (1923-1989), and his next poem anthology (Die Drahtharfe) were only published in West Germany. In the GDR, Wolf Biermann was finally banned from performing and publishing; his poetry and songs were classified as obscene and a betrayal of communist ideals. Biermann, however, could not be intimidated. In West Germany, he published his next book (Mit Marx- und Engelszungen, 1968) and released his first solo record "Chausseestraße 131" (1969, with the album title referring to the address of his residence in East Berlin). This debut was a passionate accusation against the totalitarian state which refused him any public appearances as an artist.

After a relatively long period of forced silence, Biermann was finally allowed to perform in public again in 1976. The authorities also accepted an application for a tour through the West and Biermann left for the other part of Germany. This was, however, only part of a nasty plan: during the course of Biermann's tour, the GDR authorities decided to refuse him re-entry into East Germany and thus expelled him from his country of residence. This decision generated an uproar in both parts of Germany and marked the beginning of a continuous exodus of critical artists from the GDR. The Cologne concert which had led to Wolf Biermann's expulsion was released in 1977 as the double-set "Das geht sein'  sozialistischen Gang". Biermann started his new life in the West with extensive touring through Western Europe and regularly releasing records, such as an album with childrens' songs ("Der Friedensclown", 1977). "Trotz Alledem" (1978) featured the first songs Biermann had written after his expulsion, and on "Hälfte des Lebens" (1979), he presented lyrics of other poets: Friedrich Hölderlin (1770-1843), Heinrich Heine, or Bertolt Brecht, among others, with his own music. On "Eins in die Fresse, mein Herzblatt" (1980) he commented the first time on West German topics.

In the beginning of the '80s, Biermann lived temporarily in Paris and became father of twins. He celebrated this joyful period in his life with songs he released on "Wir müssen vor Hoffnung verrückt sein" (1982). On "Im Hamburger Federbett", released in 1983, he sang bitterly about his final reckoning with communism and the 1982 coup d'état in Poland. At the end of the '80s, he admitted that he did not feel very satisfied either with his life in the western part of Germany, still dreamt about a human and democratic socialism, and seemed to be "tired from all these attempts to save mankind" (Biermann about Biermann). His looking back into the past was accompanied by the record "VEBiermann" (1988) which featured songs he had written before he was ostracized in 1965.

Then came the breakdown of communism in Eastern Europe and the fall of the Berlin Wall in 1989, and matters completely changed. Biermann who had believed that the GDR regime would last longer than himself was eventually able to perform again in the eastern part of Germany. On December 1, 1989, he staged a phenomenal comeback performance in Leipzig where the collapse of the regime had been initiated. The new songs he performed at this historical concert were released as studio versions on the album "Gut Kirschenessen. DDR - Ca Ira" (1990). Apart from further releasing records and books, he became actively involved in politics by writing newspaper articles, essays, and giving interviews. He had no interest in being a myth or aligning himself to some political party, therefore he constantly sparked controversy throughout Germany with his songs, opinions, and public appearances. The title of his 1991 release, "Nur wer sich ändert,  bleibt sich treu", which further explored the subject of German reunification, nicely summed up his philosophical credo: only if you change you remain true to yourself.

After a break of five years, he released an album with new songs, "Süßes Leben - Saures Leben" (1996) and the live set "Brecht - Deine Nachgeborenen" (1998), a homage to Bertolt Brecht. At the end of the '90s, he decided to move temporarily to Berlin, where he had lived throughout the '60s and '70s. "Paradies uff Erden. Ein Berliner Bilderbogen", the result of these Berlin impressions, was released in 1999. Through the old and new German capital, Biermann observes his unified home country with lyrics that sometimes sound like a reincarnation of the poetic mind of Heinrich Heine, the famous German poet who also was expelled from Germany and had his difficulties with the German state of mind. Throughout his career, Biermann received a lot of awards and also held temporary academic positions. In 1983, he was invited as a visiting lecturer to Ohio State University, and from 1993 through 1995, he was visiting professor at Heinrich Heine University of Düsseldorf, Germany.