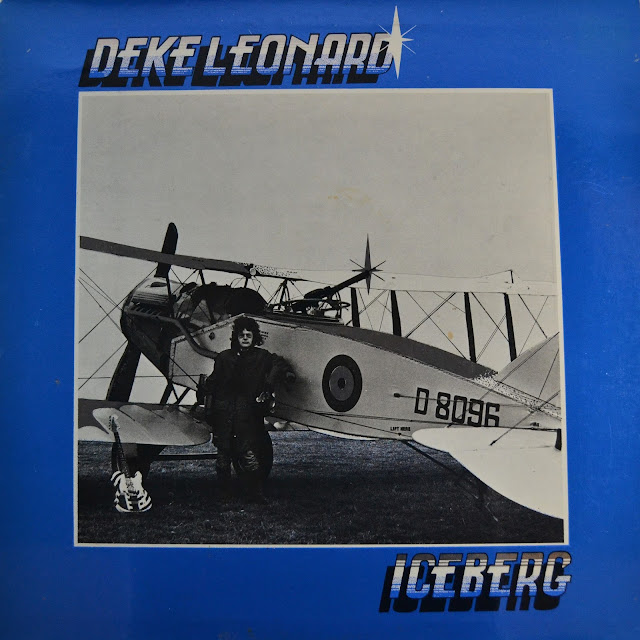 Deke Leonard was a Welsh musician serving a life sentence in the music business. During the sixties, Deke served his apprenticeship in several successful rock'n'roll bands on the Welsh gig circuit, including the Corncrackers, The Jets, The Blackjacks and The Dream, who headlined the national press in 1967 with the headline 'The Biggest Freak-Out To Hit South Wales'. There were occasional adventures abroad in the footsteps of The Beatles, notably residencies in the Top Ten Club in Hamburg - where bands cut the mustard playing up to 7 or 8 hours a day - and a tours of US Army bases in Europe. In 1968 Deke joined Pye recording artists, The Bystanders, whose single releases included "98.6" and "When Jesamine Goes". But the times were changing and The Bystanders were changing with them. They changed the name of the band to Man and renegotiated their deal with Pye Records from a singles deal to an album deal, and started seriously writing their own material. Deke, a compulsive songwriter, thought he'd gone to heaven. They released two albums on Pye, "Revelation" and "2Oz's of Plastic (With a hole in the middle)". They signed a new management deal with Marshall Arts and were soon touring Europe, so much so that they based themselves in Germany for a year.

At the start of the seventies, Marshall Arts negotiated a new record deal with United Artists and Man entered a golden period. They made seven studio albums with United Artists, four of which charted, and two live albums, "Live At The Padget Rooms Penarth" and "Xmas at The Patti" featuring Dave Edmunds. Both topped the budget album charts and are now regarded as collectors items. Each album was promoted with British and European tours, and they found themselves working 364 days a year (Marshall Arts allowed them Christmas Day off). After the second United Artists album Deke left the band and was immediately offered a solo deal with United Artists and went on to make two albums, "Iceberg" and "Kamikaze". Deke formed a band called Iceberg and set off to promote them with British and European tours, and live radio performances on the John Peel session shows. During his absence Man had recorded two albums, "Be Good To Yourself (At least Once a Day)" and "Back Into the Future", both of which charted. Things were going well. But when things were going well, the Manband (a name by which they have become definitely known) usually broke up and they duly followed this pattern. Deke, abandoning his solo career, rejoined a reconstituted Manband giving Marshall Arts, who had continued to represent Deke, a collective nervous breakdown.

The next album, "Rhinos, Winos & Lunatics" went to number 12 in the British Album charts, and the band went off to the USA, doing three long tours, the first supporting Hawkwind on the 'Space 1999 Tour', and headlining the next two. During the second tour they met one of their heroes, John Cippolina from Quicksilver Messenger Service and invited him to join the band for a British tour. He agreed and the resulting live album, "Maximum Darkness" also charted. After his departure, the band broke up, reformed, signed a new record deal with MCA Records and recorded "The Welsh Connection". As soon as it was released the band went out on tour in America and Europe to promote it. But during this tour, cracks began to appear and Man headed for a final break up. They finally broke up during a Scandinavian Tour that followed the last American adventure. They did a farewell tour of Britain which resulted in the album, "All's well that ends well" and a HTV documentary "Live at the Roundhouse".

After the break-up of Man, Deke stayed with United Artists and made "Before your very eyes", a solo album produced by Martin Rushent, whose clients included The Buzzcocks and The Human League. Then corporate shenanigans intervened. EMI Records bought United Artists and the new regime delayed the album release. It was finally released five years later. In the meantime, Deke formed The Force with former Ducks Deluxe frontman Sean Tyler and they released an album called, imaginatively, "The Force". Extensive touring followed during which Sean Tyler had a nervous breakdown and The Force mutated into Iceberg. Then, in 1983, Deke's agent informed him of an offer he'd received for a European tour for Man. Would they be interested? Yes, they were. The new tour was booked and the next incarnation of Man hit the road. The new line-up included Man originals, Micky Jones and Martin Ace along with Deke, but did not include long-time drummer Terry Williams who had joined Dire Straits. His replacement was ex-Gentle Giant drummer, John 'Pugwash' Weathers.

For the next twenty years the band toured extensively and continued to produce albums including "The Twang Dynasty", "Call down the moon" and "Endangered Species" and most of the back-catalogue has now been re-released by Point Records. Further to a number of official bootleg albums are now on the shelves, several new compilation albums have been produced (including live concert material) by various companies including Sanctuary Records. DVDs include "Man Live" and "Man At The Roundhouse" and a live appearance on the latest rock compilation DVD "The Legends of Rock". Throughout the 1980s Deke also became a journalist contributing regular articles and reviews for, amongst others, Vox Magazine, New Hi-Fi Sound and Studio Week.

During the 1990s, Deke wrote two critically-acclaimed autobiographical books, both published by Michael Heatley of Northdown Publishing. Deke's books reveal the quirky side of the rock'n'roll dream and provide a sideways glance at the social history of the last forty years. The Times called them 'hilarious and unputdownable'; Time Out (London) called them 'the quintessential rock'n'roll memoirs that'll have you laughing out loud'; Classic Rock Magazine remarked 'This is a genuinely hilarious feast. Forget Spinal Tap. This is the real deal' and Mojo Magazine observed 'Leonard writes up a storm. You will find these books irresistable'. In 2003 The Fiction Factory, a film company, acquired the film rights to both books and a film is now in pre-production. Occasional TV appearances include from the past The old grey Whistle Test and BBC coverage of festivals such as Reading and Glastonbury and a host of European shows. During 2004 Deke also went back into the studio to record his first solo album for a quarter of a century entitled "Freedom and Chains", a compilation of new songs recently released on 17th January, 2005 by Angel Air Records. Also released by Hux Records was "Wireless" - a collection of live radio shows recorded during the 70s including a John Peel session. Deke Leonard died January 31, 2017.