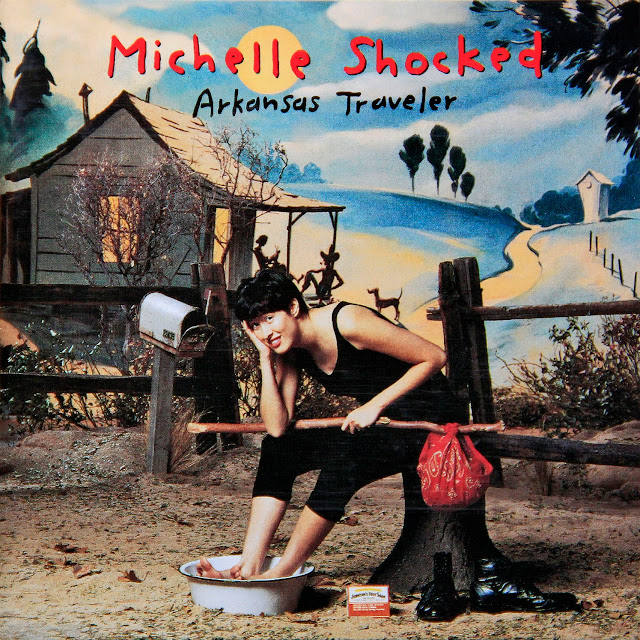 An awfully authoritative-sounding internet rock guide insists that Michelle Shocked’s life must be fiction. But if it seems like an incredible road movie, a tall tale, a legend, it is no mystery. Michelle Shocked set forth on her adventure ever so young but ever so determined to jump past, jump through, jump beyond any boundary that held her back. The soaking humid Piney Woods swamplands of east Texas at the edge of the border with Louisiana was where she came from; born in Dallas and schooled in Gilmer. Raised in a large, extremely poor, strict fundamentalist Mormon household, her escape consisted of summers spent with her hippie-atheist father. She left home for good at 16. Putting herself through the University of Texas at Austin , with no financial support from her family, she graduated with a degree in Oral Interpretation of Literature. "It was the careerist ’80s, and that seemed like the least practical thing I could pursue", recalls Shocked. After graduation, she hit the road, in customary Kerouac fashion. She rambled first to California, playing mandolin and fiddle in street bands, emerging as a staunch political activist first and foremost.

Her persona was unadulterated punk rocker with a spiky mohawk and a ring in her nose. She hung out on San Francisco ‘s hardcore scene with MDC and the Dead Kennedys. Arrested at the 1984 Democratic Convention, a front-page news photo of her struggling with the police would ultimately serve as an album cover. Her mother would eventually commit Shocked to a mental institution against her will. "After 30 days, the insurance money ran out, so I was ‘cured’ and they released me". Back on the street, dazed by the chemical straightjacket drugs given her by the mental health authorities, half-convinced that she was indeed crazy, she headed for New York City. There she explored the music scene at CBGB’s and ate her one big meal of the week at the Cottonwood Café in the West Village. Caught up in the cycle of homelessness that swept across America in the 1980s, Shocked searched for an alternative. She made her way to Paris , and hitchhiked throughout Europe, busking on the streets of Madrid, surviving on her wits, and a daily ration of alfalfa sprouts. The vagabond lifestyle was far from ideal. At an anti-cruise missile peace camp in Sicily, she was raped by a Green Party comrade. Settling on Amsterdam for the interim, she worked for a pirate radio station and shared a squat with a stranded British reggae band from Birmingham. She was still poor, but she was free.

In 1986 Shocked returned to Texas, to the annual songwriters' gathering at the Kerrville Folk Festival, to volunteer and hang out with her friends, to listen to their new songs and play her own. In those days (and for that matter, still today) Shocked was determined to credit her inspiration from fellow Texas songwriters Guy Clark and Townes Van Zandt. An Englishman who said he was a journalist heard her one night out among the campfires and asked if she would play her songs for his Sony Walkman. He never got around to mentioning that he was actually a partner in a brand new British independent record label. She played him some songs out there that night, his tape recorder sitting on a log as the crickets sang bucolic background vocals and the trucks downshifted, and she told some stories. She did not know it at the moment, but just like some of her heroes, Leadbelly and Muddy Waters, she was being field recorded. That tape of her music, made on a Walkman with weak batteries so that it ran far too quickly when played back at normal speed, got played repeatedly on the BBC.

It was a friend who owned a phone that got the call. "Your record is on the charts", was the information the label, Cooking Vinyl had to report. "What record ?" Shocked inquired. It had been named "The Texas Campfire Tapes" and it was to be her debut recording. Figuring she had nothing much to lose, Shocked saw it as her chance to offer up her two-cents worth. She had grown up in a tradition of bluegrass and blues, of Texas swing and singer-songwriters, and now Michelle Shocked was an authentic British pop phenomenon. She played her first show, her first show ever, at London’s Queen Elizabeth Hall. She had planned on activism, not a music career. Over the next eighteen months, Shocked found herself working for a manager who was also her booking agent and who was also her record label owner. Shocked remembers, "the label was shopping me to major labels, licensing my record around the world, booking gigs, collecting commissions and my royalties, and shipping me and my guitar C.O.D. It was as if I’d fallen into a new job at the circus getting shot out of a cannon". Despite the disarray, she had a plan.

Shocked risked signing with a major label (Mercury Records) for the sake of attempting to change the system from within. She turned down the label’s advance for the sake of owning her work. And she had another plan too. She had organized her songs into a trilogy that was meant to show where she had come from, not just show the listener, but to also remind herself as well. After her first taste of circus-cannon celebrity, she was leaving something more substantial than breadcrumbs behind her to mark her way back home, a trail of remarkable songs. The first part of her trilogy was called "Short Sharp Shocked" (1988). She was introduced to producer Pete Anderson, known for his commercial success with Dwight Yoakum. The album they made together became an instant classic, so much so that when they returned to the studio a year later, most everyone presumed they would automatically set forth on "Short Sharp Shocked II".

"Captain Swing" (1989) was a lot of things, but it was not "Short Sharp Shocked II". The album took advantage of her Texas roots to pursue her notion that swing was more than just a style that the mere act of music swinging shot past style. Her use of horn arrangements emphasized Michelle Shocked ‘s diverse songwriting skills. Categories now, did not apply. The final phase of her trilogy, named "Arkansas Traveler", before she had even recorded "Short Sharp Shocked" had always been meant to be a tribute to the fiddle tunes she had played with her father and brother on mandolins, banjos and such. She pursued the hidden roots of that music and those old familiar tunes. Writing new lyrics, trying out new ways of playing the oldest of tunes, writing new tunes that sounded ancient, she traveled three continents to play with her heroes and her peers and a few rank strangers. Pops Staples, Doc Watson, Gatemouth Brown, Jimmie Driftwood, Taj Mahal, and Allison Krauss were part of the adventure. Recorded on steamboats, in log cabins and even recording studios, "Arkansas Traveler" (1992) was a triumph, and if even she did not know what was next, she knew she had made her way back home.

Following her instincts, she began exploring gospel traditions while attending an African-American church in Los Angeles, where she was living on a houseboat. Shocked began writing a gospel record. On the day her next recording was to begin, she entered the studio to discover that her label was refusing to issue payment before the session even started. Shocked recounts, "I was taken into a closed-door meeting with the head of business affairs, who informed me that the label was no longer going to promote my music because I cut too good a deal for myself". Her catalog was continuing to sell steadily; the label wanted the masters back. She left the office and she never went back, not until the day she arrived to collect what she had owned all along.

Other labels tried to sign her; Mercury sent a cease-and-desist letter that blanketed the industry. They would not let her record and they were not going to release her. She recorded a solo electric record called "Kind Hearted Woman" and sold it exclusively at her shows in defiance of her label’s efforts to stop her. She toured relentlessly, reconfirming her consummate talent as a stage performer. Pioneering an artists’ rights paradigm, she sued Mercury using the 13th Amendment, the reform abolishing slavery. They settled the day the trial was to begin and for the first time in years, she was free again. She recorded a new version of "Kind Hearted Woman" (1996) with her band, releasing it on Private Music/BMG, but this time the contract gave her the option on them. Three months later, in a classic corporate shake-up, Private Music was folded into a different entity. She exercised her option and was spared the fate of so many artists in recent years, trapped in the consolidation of the recording industry. Michelle Shocked owns "Kind Hearted Woman" and her entire catalog of music. It is difficult to think of another major label artist who has ever been in her position.

Shocked now spends time between her homes in Los Angeles and New Orleans . Known at her church as Sister Shocked, she continues to work quietly for non-violence in the environmental and global justice movements. Her current efforts also involve support for Save Africa’s Children, a pan-African vision that addresses the AIDS pandemic on the African continent. She has written a cycle of songs Inspired by the brass band scene in New Orleans. Shocked spent time wandering through Mexico and Guatemala, creating another body of work, which explores her Latin-American heritage. Additionally, she has collaborated with Fiachna O’Braonain (of Ireland's Hothouse Flowers) on material that presents their vision for the new millennium. The first result of that collaboration is her latest release "Deep Natural". Co-produced by O’Braonain, Deep Natural launched Shocked’s own label Mighty Sound (2002) in typically innovative fashion. The release is book-ended with an alternate version of instrumentals entitled "Dub Natural". By stripping away her voice and lyrics, "Dub Natural" emphasizes the rich musicality that has always been part of Shocked’s work. Mighty Sound (Ryko Distribution) has planned a full schedule of deluxe reissues of the Michelle Shocked catalog. The label will also be a home for her forthcoming projects, as well as new and developing artists. For some, that would be all the story necessary; for Michelle Shocked , plainly it is just one more step on her journey. Or as she states, "I can’t tell you where I’m going, but I can tell you where I come from". 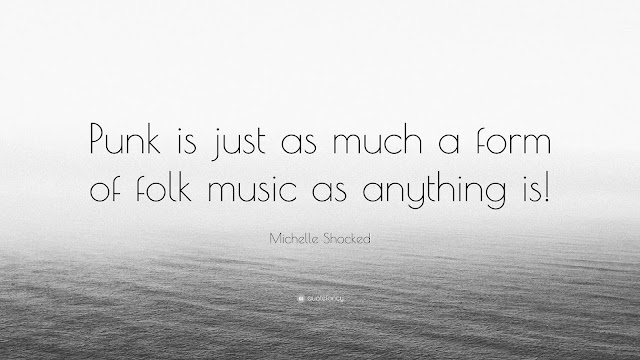