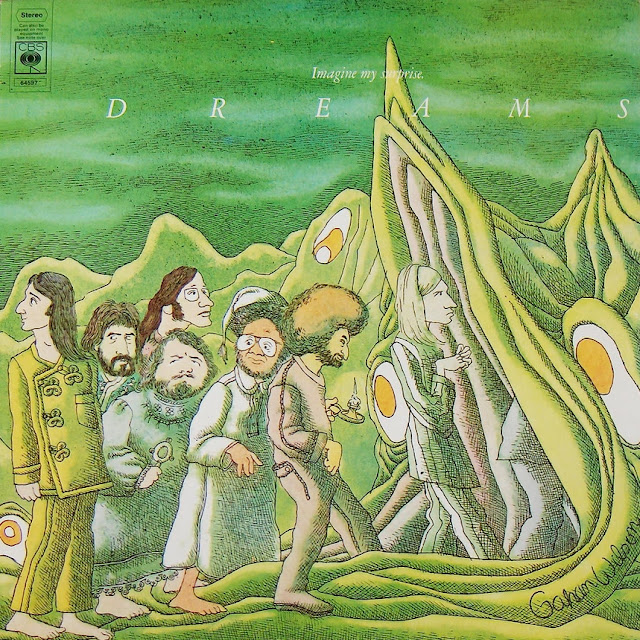 Dreams existed between 1969 and 1972. They originally consisted of singer, guitarist and keyboards player Jeff Kent, bassist Doug Lubahn and drummer Mark Whittaker. Soon the trio became a septet with percussionist Angel Allende, John Abercrombie on guitar, trombonist Barry Rogers, Michael Brecker on tenor sax and Randy Brecker on trumpet joining them. Mark Whittaker departed and Billy Cobham took up the drum stool, and with the addition of Edward Vernon as singer and the departure of Angel Allende, the Dreams line up was complete. Their approach was interesting as well as novel, recording their albums 'live' and working on a 'traditional' method of making up horn arrangements to suit the songs while «recording instead of using formulized  arrangements scored for horns and rhythm , section. Musically their style varied between soul/pop and jazz rock as if their axis swayed between FM radio respect, cult appeal and Top 40 chart success. The principal difference between Dreams and most other brass infused bands was, according to their album sleeve notes, that they didn't work from written arrangements but rather worked them out 'Trad' or 'New Orleans style', playing whatever came into their heads and I waiting for something to gel. This was a great achievement coming from a mostly white a band - incorporating a link with traditional jazz forms in a modern setting.

Dreams soon became a popular live band in the New York and Chicago areas and headed to Los Angeles. There they played a battle of the bands between Dreams and ] Geils Band for a recording contract with Atlantic Records as the prize. The boisterous rhythm and blues-based J. Geils Band from Boston was signed to Atlantic but Dreams made their own reputation. There were eyewitness reports of Dreams knocking the audience out and changing musical perceptions. Dreams tore the place down and people's eyes opened at the compulsive Panamanian drummer Billy Cobham. After the Atlantic battle of the bands sessions, Dreams received a contract from CBS Records who signed them in 1970. They began work on their debut album, "Dreams"  (CBS US 30225), which was also issued in the UK (CBS 64203) and the band was represented on the 1971 compilation "Together with New York City". For "Dreams" they selected Fred Weinberg as their producer, composer and sound engineer, whose work included albums for Eddie Palmieri, Tito Puente, La Lupe, Mongo Santamaria, Celia Cruz, Illustration (Alan Lorber's group), Little Anthony and many others. Phil Ramone, another highly respected producer and studio owner for whom Weinberg worked at the time at a studio named A & R in New York City, gave his blessings to Weinberg to record the Dreams IP at CBS Studios in New York City and complete the recordings at CBS Studios in Chicago.

All tracks were original compositions by Jeff Kent and Doug Lubahn. The album highlighted their talents for writing catchy jazz/pop/rock songs and the band's individual musical expertise. The album was recorded mostly live which added to the fresh spontaneous atmosphere of the recording. "Dreams" featured a mix of catchy songs with great horn licks and impassioned vocals from Edward Vernon; while an accomplished debut album, the individual musicians were beginning to stylistically assert themselves at the time. John Abercrombie's brief but eclectic guitar breaks on "Devil Lady" offers a hint of what was to come in his own later recordings, and Randy Brecker's trumpet and flugelhorn fills embellish pieces like "Holli Be Home" and "15 Miles To Provo" very nicely. While five conventional soul/jazz/ rock songs occupied side one, the second side was dominated by an extended epic composition typical of the time. The three part and fourteen minute long "Dream Suite" was an extended composition featuring stylistically outstanding work from Billy Cobham showing his powerful style on the drum kit and contributing an unbelievable, energetic drum solo, and with saxophonist Michael Brecker excelling on "Asset Stop".

At the time Michael and Randy Brecker were barely out of their teens and had a glittering career before them. Billy Cobham's playing caught the attention of John McLaughlin and later led to his gig with the Mahavishnu Orchestra, and John Abercrombie would make a considerable career as a soloist on ECM Records. While most of the players had jazz backgrounds, the music is an eclection of jazz, rock, and pop with some of the tracks harkening to folk roots as well. Recorded mostly live to recapture the band's energetic performances, Dreams was an accurate reflection of the open-minded musical attitude that existed at the time, and takes the sophisticated and more loosely structured horn charts and solos of jazz and places them over a rock oriented rhythm section. The results are always listenable, never boring, and often surprising. All of the pieces contain musical subtleties that make this recording special. Certainly, many of the ideas expressed here were well above those expressed by Chicago and BS’n’T,  yet the music is just as accessible and has its own distinctive character.

Dreams' second album "Imagine My Surprise" was issued in 1971 in the US (CBS US 30960). A British and European release came in early 1972 with the catalogue number of CBS 64597. Tracks featured mostly original material by Jeff Kent and Doug Lubahn including "Calico Baby", "Why Can't I Find A Home", "Child Of Wisdom", "Just Be Ourselves", "I Can't Hear You", "Here She Comes Now", "Don't Cry" and "My Lady", plus a cover of Traffic's "Medicated Goo" as featured on their live album "Welcome to the Canteen". The song was composed by Steve Winwood and producer Jimmy Miller, who would later work with The Rolling Stones. "Calico Baby" was featured on "The Music People" sampler issued by CBS in April 1972 on the American and European markets. "Imagine My Surprise" retained the Brecker Brothers, Billy Cobham, Barry Rogers and Edward Vernon from the line up that recorded "Dreams". Bob Mann on guitars, flugelhorn and vocals replaced John Abercrombie. Jeff Kent (keyboards) was replaced by Don Grolnick, and Will Lee (bass) replaced Doug Lubahn, who left the band to tour with the reformed Doors.

Album producer Steve Cropper contributed additional guitar on "Calico Baby" and superb background vocals on "Don't Cry My Lady" and "Child Of Wisdom". Original percussionist Angel Allende played conga drums on "Calico Baby" and Toni Torrence featured on background vocals on "Find A Home". "Imagine My Surprise" featured musicianship of incomparable beauty and a master class in jazz composition. "Just Be Ourselves" had a vocal by bassist Will Lee, and suggested a haunting tribute to the memory of its composer Don Grolnick. "Imagine My Surprise" was recorded in Memphis and produced by Steve Cropper who, according to "The Music People", was "a man who had some previous experience working with horn bands. Steve was there when the 'Memphis Sound' was born -and he's still there". With the fluidity of the line up, the album moves easily from soul to jazz rock and back again. According to Bob Palmer's review of "Imagine My Surprise": "Every note is in place, every phrase means something, the flashes and energy are all directed and channelled. Yet the band retains both its fire and sophistication... music people can't avoid dancing to." While "Imagine My Surprise" got some favourable reviews and advanced Dreams' cause somewhat, the writing was on the wall for horn-based rock bands with the horn driven style of jazz-rock rapidly turning in on its axis and losing commercial popularity.

Record companies were losing patience as the pretenders to the Blood Sweat'n'Tears and Chicago thrones weren't returning interest. After the release of their second album, "Imagine My Surprise", Dreams disbanded. In 1972 when Dreams bit the dust, jazz fusion was taking a new route away from horns to smaller, tighter groupings with individual virtuosos such as John McLaughlin and Chick Corea heading new bands made up of gifted soloists in Mahavishnu Orchestra and Return To Forever respectively. Here the focus was on instrumental flash and rock-inclined pyrotechnics within a jazz framework, combined with strong spiritual inclinations as practiced by McLaughlin and Corea with their individual commitments to Eastern philosophy and the Church of Scientology. In conclusion, Dreams' ambitious and highly vibrant style of Jazz Rock Fusion neatly contrasts the ethereal nature of their name. Both albums, "Dreams" and "Imagine My Surprise", capture an exciting time when new elements of jazz, soul, rock and funk were equally handled and produced music unique in its originality. Dreams deserve to be more than a footnote to beginning the careers of Billy Cobham, John Abercrombie and the Brecker Brothers among others. With their distinctive jazz/rock/funk crossovers encompassing commerciality and musical dexterity, for a brief while they added some spice of their own to the jazz rock recipe book.