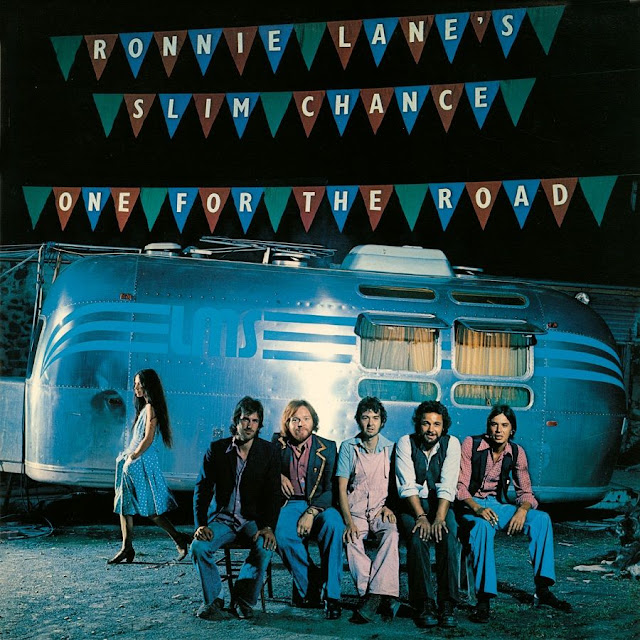 As the former bassist for The Small Faces, and later The Faces, Ronnie Lane left both bands when he felt the spirit of the group had died, gaining him the reputation of an uncompromising artist, and allowing him the opportunity to release some fine solo material in the '70s. An underrated singer and songwriter, Lane (along with guitarist Steve Marriott) co-founded the British mod group The Small Faces in the mid-'60s, helping to guide them to the top of British charts with his clever songwriting. After Marriott left, Lane jettisoned the group's mod reputation and, adding former Jeff Beck cohorts Ron Wood and Rod Stewart, Lane re-formed the group as The Faces, a loud, boozy rock band that achieved widespread success in the States (something The Small Faces could never do). Although Lane was the unacknowledged leader among the group members, audiences were drawn to singer Rod Stewart, and when Stewart's burgeoning solo career began affecting the quality of The Faces' albums, Lane jumped ship to form his own band in 1973. Billing themselves as Ronnie Lane's Slim Chance, the bassist organized an ambitious tour dubbed the "Passing Show" that included a traveling circus complete with jugglers, clowns, and animals in 1974. Although the tour was an interesting moment in rock history, it was a financial failure from which Lane would never recover. For income, he continued leasing his mobile recording unit out to bands like Led Zeppelin, who used it to record their double-LP "Physical Graffiti".

After leaving the Faces, Lane formed his own band, Slim Chance, who recorded the singles "How Come" (UK No. 11) and "The Poacher" (UK No. 36) and the album "Anymore for Anymore", showcasing a blend of British rock, folk and country music. The original line-up of this band included Scottish singer-songwriters Benny Gallagher and Graham Lyle, who provided harmony vocals and played a variety of instruments including keyboards, accordion, acoustic guitar, mandolin, banjo and harmonica. They left in May 1974 to continue their career as a duo, though they would appear on 1977's Rough Mix as guests. After initial success he toured the UK with "The Passing Show", a circus-type carnival complete with tents and barkers. Viv Stanshall, from the Bonzo Dog Doo Dah Band, served briefly as ringmaster (of sorts). Lane moved to Island Records and issued Ronnie Lane's Slim Chance and "One for the Road". In late 1976 he joined a short-lived reformation of The Small Faces but quit after two rehearsals, to be replaced by Rick Wills (who later played alongside former Small Faces drummer Kenney Jones in the Jones Gang). However, Lane had signed a contract with Atlantic Records as part of The Small Faces, and was informed that he owed the company an album. His ensuing album with Pete Townshend, Rough Mix, produced by Glyn Johns, which was released in 1977, was lauded as contender for best album of the year by many critics, but the label did not promote it and sales were lackluster.

During the recording of "Rough Mix", Lane's multiple sclerosis was diagnosed. Nonetheless he toured, wrote and recorded (with Eric Clapton among others) and in 1979 released another album, "See Me", which features several songs written by Lane and Clapton. Around this time Lane travelled the highways and byways of England and lived a 'passing show' modern nomadic life in full Gypsy traveller costume and accommodation. In 1983 his girlfriend Boo Oldfield contacted Glyn Johns with a view to organising a concert to help fund Action for Research into Multiple Sclerosis. Johns was already arranging Clapton's Command Performance[clarification needed] for Prince Charles so they decided to book the Royal Albert Hall for a further two nights and host a benefit concert. The resulting ARMS Charity Concerts. featured Eric Clapton, Jimmy Page, Jeff Beck, Bill Wyman, Charlie Watts, Ronnie Wood, Kenney Jones, Andy Fairweather-Low, Steve Winwood, Ray Cooper, James Hooker, Fernando Saunders, Chris Stainton, Tony Hymas, Simon Phillips and others. With the addition of Joe Cocker and Paul Rodgers they toured the US.

Lane emigrated to Texas, USA, in 1984 (first to Houston, then Austin), where the climate was more beneficial to his health and he continued playing, writing, and recording. He formed an American version of Slim Chance, which was, as always, a loose-knit conglomeration of available musicians. For much of the time, membership included Alejandro Escovedo. For close to a decade Lane enjoyed "rock royalty" status in the Austin area. He toured Japan but his health continued to decline. His last performance was in 1992 at a Ronnie Wood gig alongside Ian McLagan. In 1994 Ronnie and his wife Susan moved to the small town of Trinidad, Colorado. Jimmy Page, Rod Stewart and Ronnie Wood funded his medical care as no royalties from the Small Faces work was forthcoming - until Kenney Jones and Ian McLagan were eventually able to secure payments, by which time Steve Marriott had died in a house fire and Lane had also died. Lane succumbed to pneumonia, in the final stages of his progressive multiple sclerosis, on 4 June 1997 and was buried in the Masonic Cemetery in Trinidad, Colorado. An album of live BBC recordings was about to be released to raise money for his care when Lane died.

Ride recorded "A Trip Down Ronnie Lane" as a B-Side to their final single "Black Nite Crash" in 1996. The Ocean Colour Scene song "Travellers Tune" on their 1997 studio album "Marchin' Already" was inspired by and written in the memory of Ronnie Lane, a strong influence on the group, which appeared at the tribute concert for Ronnie Lane. Likewise Lane had been such a source of inspiration to the members of Poi Dog Pondering that they created a tribute page for him and in 1995 band member Susan Voelz covered Lane's song, "Glad and Sorry" on her 1995 album, "Summer Crashing", "out of her respect and affection for Ronnie Lane". In 2000, Paul Weller recorded "He's the Keeper", a song dedicated to Lane's memory. An album of live and in-studio recordings from Lane's Austin days was later culled, and released as Live in Austin. A street was named after him, "Ronnie Lane", in Manor Park in 2001. In January 2006 BBC Four broadcast an extensive documentary about Lane, The Passing Show that had been in preparation since 2000 and included footage of vintage concerts by the Faces and Slim Chance. In October 2006 the documentary was also shown on BBC Two. In 2012, former Small Faces bandmate Ian MacLagan interpreted some of Lane's best-known songs in a record entitled Spiritual Boy: In Appreciation of Ronnie Lane. McLagan died in 2014.

Ronnie Lane has been rightly described as a born entertainer, humorous, emotional and spiritual. He was 'short and sweet', 'combined East End nous and the romantic' and a troubadour to the day he died. Ronnie gambled his shirt on a pipedream, a circus! His approach to music was refreshing and genuine, the gig an instant party. Ronnie Lane and Steve Marriott were one of the great songwriting partnerships of the '60s. Listen to The Small Faces' classics, "Itchycoo Park" or "Lazy Sunday" for example. The Faces became one of the great rock and roll bands of the '70s. Ronnie's next great venture, The Passing Show, was equally rich musically but not commercially or in terms of public recognition at the time. "How Come" was Ronnie's last top ten (or rather, eleven!) hit, but not his last great song. Living in a remote part of Shropshire, surrounded by showman's wagons, and inspired by Meher Baba, Ronnie carried on writing and performing with his band Slim Chance and others including Eric Clapton and Pete Townshend even after he was afflicted by MS. Ronnie was held in such high esteem, that he became the focus of star-studded concerts and tours on both sides of the Atlantic to raise money for other MS sufferers. When he moved to the Texas to seek treatment, he carried on playing with some fine American musicians. Ronnie died in Colorado in 1997 but his songs live on.