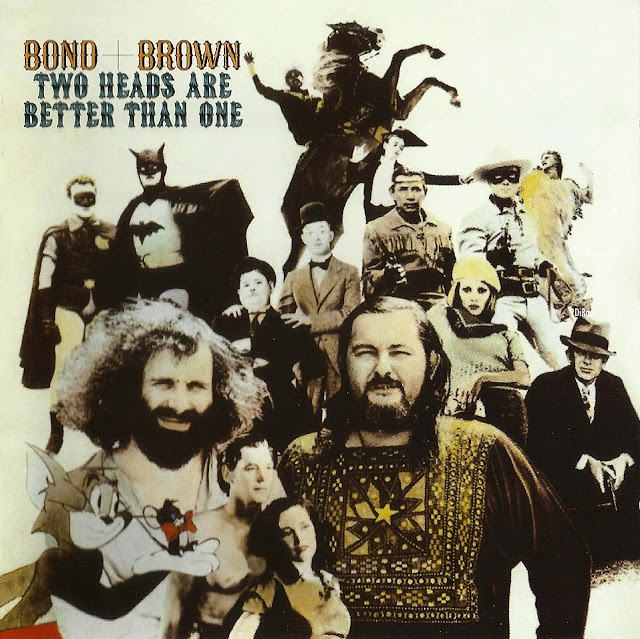 It was inevitable that one day Pete Brown and Graham Bond would work together. They had been friends going back to the early 1960s and the jazz poetry gigs where Pete, Mike Horowitz, Spike Hawkins and the other pioneers of performance poetry would vent their literary spleen backed by musicians on the lunatic fringes of the London jazz scene - including Graham, Dick Heckstall-Smith and Ginger Baker. For Pete, the Graham Bond Organisation was the best British band and he wrote his classic song 'Theme for an Imaginary Western' with the GBO in mind as they took the blues and R&B all over the UK in vans held together with hope and string to places where the music had never been heard. Pete had been writing songs for Graham and was to play in the last incarnation of the band, but it all fell apart before Pete could join.

In 1972, Pete's band Piblokto was winding down. Meanwhile Graham was in the process of being sacked from the Jack Bruce Band. They had been on tour, promoting Jack's album Harmony Row; guitarist Chris Spedding and drummer John Marshall with saxophonist-surgeon Art Theman comprised the rest of the line-up. Graham was in modern parlance, 'high maintenance1 especially during the times when he was nursing a serious drug habit. Because of his medical duties, Art couldn't make the gig in Rome, which was unfortunate because he was the band's peace-maker between Jack and Graham. But it was there in the dressing room of the Teatro Boncaccio, that Jack got so exasperated with Graham that he ripped the sink out of the wall and threw it at him.

So Pete and Graham found themselves in limbo and decided to join forces. There were a couple of Piblokto gigs to do; one at the Seymour Hall in London and what Pete describes as a "very depressing gig in Southend, a terrible organ trio were the main event singing 'Knees Up Mother Brown' with a singer who was completely out of tune. We were in the psychedelic ghetto with about 18 people." For the new band, Pete brought in drummer Ed Spevock from Piblokto and bassist deLisle Harper from the recently disbanded Gass formed by Bobby Tench with drummer Godfrey McLean. Graham recruited guitarist Derek Foley from prog rock band Paladin with Graham's wife Diane Stewart on vocals. They got a record deal with Chapter One, a label formed by composer and conductor Les Reed who went into partnership with Wessex Studios and Donna Music Ltd. Most of the product was 'easy listening', light classical and a few comedy albums, but there was also a connection with Mecca Ballrooms who were looking to book some more progressive acts on their circuit.

The band had two managers, one was a 'silent partner'; the other a tough guy called Mick Walker. His brother is Savoy Brown's Dave Walker; back in the day, they played skiffle together in teenage bands going on to form the Red Caps who landed a record deal with Decca. Dave carried on in bands while Mick became a businessman, establishing the famous Rumrunner Night Club in Birmingham which later became the launch pad for Duran Duran. Maybe the writing was on the wall for Bond and Bond with their manager's opening remarks on meeting the band, "I've just seen Pete Brown and Graham Bond albums together in a remainder bin."

The album was recorded at Richard Branson's Manor Studios, engineered by Tom Newman who worked on Tubular Bells and at Wessex, one of Pete's favourite studios, but sadly sold to developers for housing in 2003. They began by recording an EP which featured 'Lost Tribe', 'Milk Is Turning Sour In My Shoes' and 'Macumbe' and then the tracks for the album. Unlike most British musicians of the times, Pete and Graham had a real affinity for digging into the grooves of a song and imbuing it with soul and funk feels strongly linked to Africa; Pete was a percussionist as well as a lyricist and singer - the Graham Bond Organisation had been driven by Ginger's strong African rhythms who had included Graham (and Diane) in his short-lived band Airforce. So amidst the welter of heavy rock and codclassical prog rock that dominated the British underground scene of the day, this album came from a very different musical sensibility and inspiration.

Between them Pete and Graham wrote most of the songs with contributions from deLisle Harper (nowadays an accomplished arranger) including 'Oombati'. One song, 'Colonel Fright's Dancing Terrapins' was recorded with a slightly different and earlier line-up featuring guitarist Mick Clark from the Clark Hutchinson duo. The song was inspired by some graffiti spotted scrawled on a French wall during a Piblokto tour; "Somebody asked what CFDT meant," says Pete, "it was probably some political slogan, but I just said, 'Colonel Fright's Dancing Terrapins', but we're in northern France so there is something in there about first world war tanks".

Songs like 'Lost Tribe' and 'Looking for Time' were an attempt to express the fact that musicians like Pete and Graham found themselves on the outside of the rock scene in the early seventies, just like they had done in the early sixties when they inhabited the demi-monde of be-bop and 'beat poetry' scorning and in turn being scorned by the jazz establishment. The playfulness in Pete's lyrics sometimes found its way into the music itself; '"Scunthorpe Crabmeat', has about a million time signatures - loads of stops and drop beats all over the place. Piblokto did a straight version of that, a straight shuffle. This was a bizarre, perverted version." As was 'Massed Debate' "a British pervert song" and Pete's homage to 'Arnold Layne'.

The song with the most interesting antecedence was Graham's 'Ig the Pig'. IG were the initials of the Los Angeles boss of a Mercury Records subsidiary label called Pulsar. During his time in the States in 1968, Graham found himself signed to this label along with Dr John and the Doug Sahm Band. With his reputed 'heavy' connections, IG was the guy who did his business at the point of a gun and was one day confronted by Diane (on behalf of Graham who was sick), Mac Rebennack and Wayne Talbot from the Quintet, all coming in search of promised cash. Now Graham, Mac and Johnny  Perez from the Sahm Band all had an abiding interest in the occult - and when they realised that no cash would be forthcoming, they got together to put a whammy on IG. The result? His wife caused a hit and run accident and IG himself was demoted to the ranks very shortly afterwards.

The band were a regular working outfit on the road with a small, but strong following of freaks and hairies especially at The Roundhouse and The Temple in Wardour Street, one of the last hippie outposts of the acid deranged and damaged. They were also signed to EMI in France who were very pro-active in promoting the band where Pete had always had an enthusiastic fan base - although how the band actually survived was a small miracle. Whenever Graham was driving, wheels had the habit of coming off. In fact most of the chaos of this band on the road had Graham at its core. They were in France doing 90 mph with a van full of gear and people, when a wheel rolled past them, "Oh, I think that's one of ours", said Graham. They spun off into a field and somehow Graham managed to bring the van under control before they all perished. With heroin in short supply, Graham would engage country chemists in a series of mumbles and hand signals which would produce varieties of noxious brews that only Graham could stomach. And e.erybody else's stomach turned at the sight of Graham tucking into a huge plate of bloody tripe straight out of a local meat market after an exhausting drive. Coming back through customs, Graham did his bit for Anglo-French relations with loud cries of "You won't find any drugs up my arse."

And it was drugs that finally did for the band. There was trouble anyway because Diane and the manager fell out, resulting in the singer being fired and bringing the fires of hell raining down on Graham's head. They were on tour in Leicester where Pete recalls, "this incredibly frightening woman appeared and gave Graham loads of acid and he did nothing but play feedback all night." The next night in Scarborough, Graham was hospitalised and they did this and the next gig without him and after that the whole band folded. This was to be Graham's last recorded album. His mental health was deteriorating as his obsession with the occult grew. After a spell in a mental hospital, his life ended tragically under the wheels of a London Underground train in May 1974. Pete went on to a renaissance career in both music and film, continuing to write with Jack Bruce, forging another productive partnership with ex-Man keyboardist Phil Ryan, recording albums on his own label, touring his band, working in the studio with an array of promising young talent and writing and producing films. He is currently working on his autobiography.