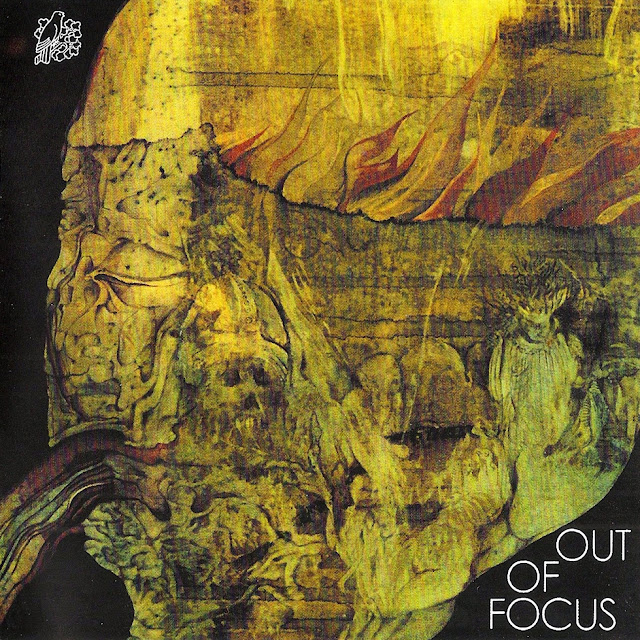 On their eponymous second album, Out of Focus further develop their progressive jazz-rock sound, at the same time pushing in other directions as well. The rhythm section is still as upbeat and funky as ever, with those repetitive but odd rhythm patterns. There is now more sax in the mix, as well as the flute riffing, guitar wails, and chunky organ chords, with each instrument allowed ample soloing and no instrument over-dominant. If anything, this one dispenses with some of the heavy rock sound to get closer to the jazz influences. They slow down the pace on the strange folk song "It's Your Life" as well as the even stranger "Blue Sunday Morning" with its airy flute, church organ, and bizarre song narration. Lyrics are even sharper, whether ripping into the banality of television or the hypocrisy of religion, with the dark-edged humor more firmly in place. On the suite "Fly Bird Fly"/"Television Program," the group veers from soft to full in-your-face intensity while staying on a bouncy riff. On long tracks like this one and "Whispering," they throw a lot of variation over repetitive grooves to create mesmerizing jams that are both incredibly loose and far more focused than the average jam band.

As Mario Rossi’s excellent liner notes make clear, by the summer of 1971 and the release of their sophomore album, the self-titled Out Of Focus, the band have quite dramatically eschewed the loose, amateurish rawness that characterised Wake Up! in favour of a more structured, professional approach. In it’s place, Out Of Focus have adopted a more jazz-rock oriented style in the songwriting. Neumüller has jettisoned the lead role for the flute on this album and he now shares his woodwind duties between flute and saxophone. I’ll come straight out and say it, however. I find the sax work on this album incredibly unsophisticated and grating. Neumüller demonstrates little mastery of the instrument but uses it extensively as a tonal layer in the arrangements, often in tandem with Hennes Hering’s organ lines and sometimes in unison with Drechsler’s guitar lines. Musically, I find it repetitive and unimaginative. Of course, I say this with the benefit of hindsight and the use across the decades of a sax by many rock and prog acts in thrilling ways. Let’s just say Theo Travis he is not. I suppose it stands as a legitimate experiment with a brassy, hard-bop sound that would come to ultimate fruition a year later on Four Letter Monday Afternoon. Nevertheless, what I’m hearing here is, to me, an annoying intrusion in some interesting compositions.

To speak in broad strokes, Out Of Focus have slowed down a lot. The tracks on this album possess a much more open sound, allowing their musical ideas more space in which to breathe. There’s a subtlety to the playing beyond the soft/loud dynamics of their debut. Many of the melodic sensibilities of Wake Up! have been retained but developed to offer a broader harmonic palette. Fly Bird Fly is a wonderfully tuneful example of the way in which they have reconsidered their songwriting. Everything is so much more controlled and restrained. This is particularly notable in Klaus Spöri’s much more delicate drumming and even more so in Neumüller’s vocal delivery. On this album he comes over as a heavy-lidded performance poet channelling Mick Jagger to vent his anti-establishment spleen; but he is distant, detached, almost astral in his sonic position and it’s a whole lot more palatable. What he is saying does now sound a tad juvenile, but back then, this was real and avowedly counter-cultural.

"What Can A Poor Boy Do (But To Be A Street Fighting Man)" offers a hint in its title. That we ought to expect something reactionary but it doesn’t actually manifest itself in this track. With its high-tempo, infectious and repetitive rhythm, this could just have easily have been on a Blue Note Recordings release a decade earlier. Or perhaps Out Of Focus were inspired by the De Patie/Freleng cartoons of The Pink Panther with Henry Mancini’s iconic theme tune because there are clear echoes of that too. I imagine that this must have been an audience favourite at the time, just because it’s fun. "It’s Your Life" also has its tongue in its cheek as it gently see-saws its way along like a children’s nursery rhyme, but with a lyric like “No more whipping your bottom/When you’re gasping, longing for it”, I don’t suppose it was in any way intended as children’s entertainment.

Things start to get serious with "Whispering", which is primitive and barely listenable unless you’re under the influence of psychoactive drugs. Essentially the same four notes again and again for its 14 minute duration; it’s as underground and dingy and seedy as I imagine 1971 Munich ever got. It still has its counterpart today in the kind of minimalist, downtempo techno you’ll hear in the chill-out rooms of dance clubs all over Europe. For me to get the desired effect required four HobNob biscuits eaten quickly and dry one after the other, no liquid to cleanse the palate, then lie back and let the sugar do its work. What a trip, man. Genuinely. This is what was great about the underground psychedelia of its day; played by heads for heads. It is shamanic and intoxicating if you can find the time and the mood to go with it. "Blue Sunday Morning" continues the lysergic theme with Jesus being bored in heaven and desperate to come down to Earth and partake of some weed, but by the time Television Program loops its repetitive, though likeable, motif round and round my head, I feel a little browbeaten. The biscuits have obviously worn off, and without those sugar-laden receptors in my brain firing off, it’s really quite difficult to keep focussed on the music.

Like "Wake Up!", this is undoubtedly a product of its times but it’s also something that can transcend those temporal boundaries and have some relevance for our modern anodised and commoditised ears. This album reminds us how great analogue can sound and once again, Ben Wiseman’s remaster superbly and faithfully recaptures the thrumming warmth of valves and the simple chemistry between five musicians. The fin de siècle doom-mongery of the debut has been replaced with a certain joie de vivre. Or maybe they were just on better drugs? They certainly seem to be having fun and enjoying what they are doing a bit more. As psychedelic albums go, this is one of the better ones I’ve heard. It also compares with some of The Doors early recordings. Just as Jim Morrison is ‘retiring’ to Paris after the recording of L.A. Woman, and four years after The Doors were asked to change the word ‘higher’ to the word ‘better’ in their rendition of Light My Fire on The Ed Sullivan Show, Out Of Focus are stoned out of their brains and carrying Morrison’s ‘scrambled-egg mind’ torch to a logical apotheosis. The Germans are more hardcore than I think the Doors could ever have dreamt of, even with Morrison in their midst, but they are also quite an influence on the Germans.