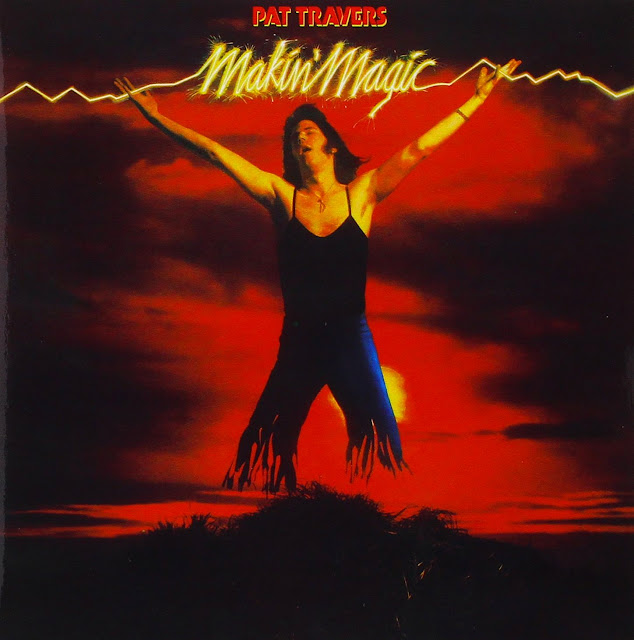 Pat Travers was born and raised in Toronto, Ontario. Soon after picking up the guitar at age 12, he saw Jimi Hendrix perform in Ottawa. Travers began playing in bands early in his teens; his first bands were the Music Machine (not to be confused with the Californian psychedelic garage band of the same name), Red Hot, and Merge, which played in clubs in the Quebec area. While performing with Merge, he was noticed by rock artist Ronnie Hawkins, who invited Travers to perform with him. In his early twenties Travers moved to London and signed a recording contract with the Polydor label. His self-titled debut album "Pat Travers" was released in 1976, and featured bassist Peter "Mars" Cowling, who would become a mainstay in Travers' band for several years. An appearance on the German TV show Rockpalast in November 1976 was later released on DVD under the title "Hooked on Music". This performance showcases an early version of Travers' band featuring Cowling and drummer Nicko McBrain. During 1977 Travers added a second guitarist to his band, changed drummers twice including using Clive Edwards, and by the time "Heat in the Street" was released in 1978 had put together the Pat Travers Band. This grouping featured Travers on vocals and guitar, Pat Thrall on guitar, Cowling on bass, and Tommy Aldridge on drums and percussion. The band toured heavily, also supporting Rush on their Drive til You Die tour in support of A Farewell to Kings.

The guitar Travers most often appeared with on stage and on album covers in the band's early years was a 1964/65 model double cutaway, double humbucker pickup Gibson Melody Maker. The band's next release was a live album entitled "Live! Go for What You Know", which charted in the Top 40 in the United States and included the tune "Boom Boom (Out Go The Lights)" (originally recorded by Little Walter, credited to Stan Lewis), which climbed even higher on the charts, entering the Top 20. "Snortin' Whiskey" was a major American radio hit from 1980's Crash and Burn and Travers began the 1980s as a hot item in the hard rock music scene. After an appearance before 35,000 people at the Reading Music Festival in England, both Thrall and Aldridge announced they were leaving the band to pursue other projects. Travers and Cowling teamed up with drummer Sandy Gennaro and released Radio Active that same year. A co-headlining tour with Rainbow followed, and the two bands performed in major arenas across North America. Although the tour was Travers' most successful road outing, the "Radio Active" album barely made it into the Top 40, reaching only number 37. It was much different than Travers' previous work, with more emphasis on keyboards than heavy guitars. Disappointed with the lack of sales, Polydor dropped Travers from their roster, and he in turn sued the record company on grounds that he was under contract with them to record more material. He won the lawsuit, and was able to release "Black Pearl" in 1982.

This release also featured more mainstream music rather than the hard-driving rock Travers had recorded earlier, and included the hit single "I La La La Love You", featured prominently on mainstream Top 40 and album oriented rock stations, and in the 1983 movie Valley Girl. "Hot Shot" was Travers' last major label release of original music, and was a return to a harder-edge style of rock than his previous two albums had been. One of Travers' best-recorded projects, it went basically unnoticed and is best remembered for the single "Killer". It was during this time that Travers also released Just Another Killer Day, a 30-minute home video featuring music from "Hot Shot" that was a sci-fi type short story about sexy alien women searching for information on music here on earth. In 1984, Travers was again supporting Rush. Alex Lifeson is one of Travers' many admirers.

Before the release of "Hot Shot", longtime bassist Cowling left the band, and Travers would work with several different bassists including Cliff Jordan and Donni Hughes until Cowling's return in 1989. Also at this time Jerry Riggs joined the Pat Travers Band, and he and Travers created a guitar team that fans considered difficult to rival. After the release of "Hot Shot" in 1984, Polydor made plans to issue a greatest hits package, and then ended their relationship with Travers. The latter half of the 1980s were quite grueling for Travers. Having entered the decade at the top of the music game, he found himself in 1986 without a record contract and being forced to earn a living once again playing nightclubs and touring constantly. By 1990, he had gained a deal with a small European label and released School of Hard Knocks. The project was completely ignored by radio. A full-length concert video Boom Boom – Live at the Diamond Club 1990 was shot in Toronto to be released in audio version as CD Boom Boom next year, but Travers was still not able to return to the success he had ten years earlier, working only on indie labels, as with Lemon Recordings.

Shortly after, Travers signed a deal with American-based Blues Bureau International Records, a company formed by noted producer Mike Varney. Travers' first recording for the label was "Blues Tracks" released in 1992. It earned positive reviews from critics. Several more releases on the BBI label followed during the 1990s. In 1993, Travers parted company with both Jerry Riggs and Peter "Mars" Cowling, and Riggs was briefly replaced by former Foghat guitarist Erik Cartwright. The relationship was very brief, and Travers has worked with a variety of musicians since that time. Travers has not been able to regain the level of commercial success he once had, despite a very large and loyal fan base who call themselves "Hammer Heads". He tours regularly in the U.S. and has made several trips to Europe in the last decade as well. In 2001 he was part of the "Voices of Classic Rock" tour, and had a minor hit with Leslie West from the band Mountain called "Rock Forever". In 2004 he started a project with the veteran drummer Carmine Appice and started touring the U.S.; as of now there are 3 albums released. Travers recorded cover tunes from bands such as Led Zeppelin, Montrose, Queen, and Trapeze under the album name P.T. Power Trio 2, and they toured Europe in November 2006. Travers has lived in central Florida for several years, and is now married with two children. Travers is also a Black Belt in the style of Isshin Ryu Karate, and currently trains with 10 time World Champion, Mike Reeves Sensei in Apopka, FL

From 2008-2016, was one of the longest/most consistent line ups for Pat Travers Band. Joining Pat was Kirk McKim (2006-2015) (Guitar/Vocals), Sean Shannon (2008-2010 (Drums), followed by Sandy Gennaro (2010-2016), and Rodney O'Quinn (2007-2016)(Bass/Vocals) Viewed as the "Must See Line up" for all die hard PTB fans, they never disappointed! From the smoking appearance on Bob Coburn's Rockline Radio show, to the Moondance Jam show that aired on Direct TV's "Audience" channel. The Pat Travers Band put out the album "Fidelis" in late 2009. In July 2013, The Pat Travers Band put out new album "CAN DO" released by Frontiers Records, a major label based in Italy for numerous artists in the field of classic rock. The "CAN DO" album was supported by PTB tours of the U.S., the U.K., and Europe during the later half of 2013. In January 2015, Frontiers Records released Pat Travers Band Live at the Iridium NYC, recorded in February 2012, which showed how deadly this line up was. Also featured Jon Paris playing blues harp on "If I Had Possession Over Judgment Day" and "Spoonful". Travers also sang on Boston metal band Extreme's minor hit "Get the Funk Out," from their hugely successful 1990 "Pornograffitti" album. Travers has recently become a part of and performed with the All-Star band Scrap Metal.