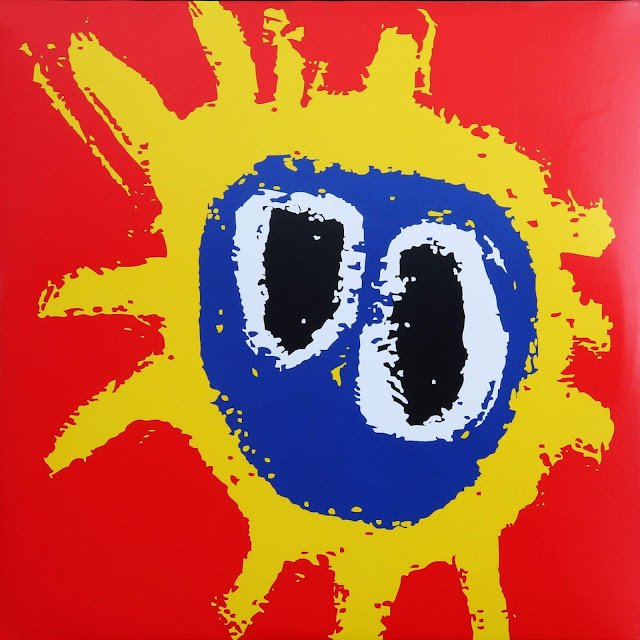 The meeting of unashamed, celebratory club music and rock star fandom is what gives Primal Scream's 1990 album "Screamadelica" its particular mood, half strutting with confidence, half yearning for transcendence. It’s a full-length manifesto not just for the brotherhood of clubbing but for the syncretic approach to rock Primal Scream were exploring. A trumpet riff; a louche, echoey, funk groove scoured by trails of guitar; a snatch of dialogue from The Wild Angels: "we wanna be free, to do what we wanna do". In February 1990, the "Screamadelica" lead single "Loaded" made for an odd UK hit. Its sample soup might have put you in mind of tracks by DJs like Coldcut, but more laid back, and with the magpie wit replaced by studied cool. The vibe of "Loaded" was unusual enough. The identity of its makers was what really startled. Primal Scream had already jumped from sweet-toothed jangle-pop, which Bobby Gillespie’s reedy voice suited well, to scuzzy proto-grunge, which it really didn’t. Reviewers found the band’s second self-titled LP an awkward experience, which explains why a further lurch in direction on "Loaded" attracted as much mockery as delight. Great single, everyone agreed, but was it actually Primal Scream in anything but name ?

"Loaded" had precedent: the warm, loping shuffle of the Stone Roses’ "Fools’ Gold" for one - but its status was set as much by what came after. Gillespie wasn’t the only indie bandleader to find himself a new groove, and the summer of 1990 was speckled with similar hits from the obscurest of sources: The Soup Dragons, The Beloved, The Farm. Like earlier psychedelic explosions, you might argue how much of this was down to the liberating effects of drugs and music on shy boys in bands, and how much was down to the more worldly urge to make some fast money and get on TV. The indie-dance bubble inflated, and a saucer-eyed version of "Strawberry Fields Forever" by unknown chancers Candy Flip probably marked the exact moment it burst. Months after that, the Primal Scream LP finally came out. If welding dance and rock was all it achieved, its 18-month gestation would have hurt "Screamadelica". The album might have been a mere appendix to a briefly promising scene. Fortunately, the power of "Screamadelica" isn’t in an abstract clash of two different genres, but in the marriage of two very similar sensibilities.

One is Bobby Gillespie’s. Primal Scream’s output has sometimes been dismissed as record collection rock, their versatility no more than a procession of learned poses, The Byrds, rave, Krautrock, post-punk. But Gillespie’s approach is less bandwagon-jumping and more a kind of aesthetic cosplay, where his fannish intensity of identification works to overcome the limitations of technique. The comedown blues of "Damaged" is the weakest song of "Screamadelica", but Gillespie’s conviction makes it essential to the record. The other is producer Andy Weatherall’s. Weatherall, along with Terry Farley who remixed the "Come Together" single, was part of the Boy’s Own DJ and fanzine collective in the earliest days of London Acid House. Boy’s Own loved big, uplifting records, played any genre they fancied, and everything they did, in print or on record, was touched with a cheeky swagger. The euphoric splash of Italo house piano at the climax of "Don’t Fight It, Feel It", the most floor-ready track on "Screamadelica", is a great Weatherall moment.

The meeting of these approaches, unashamed, celebratory club music and rock star fandom, is what gives "Screamadelica" its particular mood, half strutting with confidence, half yearning for transcendence. One result is that the record is often better when Bobby Gillespie is a presiding spirit rather than an actual singer. Compare album centrepiece "Come Together" with its single version, where Gillespie enacts a loved-up Ecstasy high in winsome style. The LP drops his vocals, reshapes the track around the gospel backing singers, and it becomes something titanic. It’s a full-length manifesto not just for the brotherhood of clubbing but for the syncretic approach to rock Primal Scream were exploring. "All those are just labels", thunders a sampled Reverend Jesse Jackson, "We know that music is music." If you want to know how joyfu, and how corny, pop’s discovery of rave could feel in 1991, this is where to start. Other high points use the frontman better. "Higher Than The Sun" casts Gillespie as an astral voyager in a post-rave take on Tim Buckley’s "Starsailor". He sounds as awed by its soundscape of hoots, harpsichords, ambient drift and trumpet blasts as the listener. 13th Floor Elevators cover "Slip Inside This House" is just as questing, but more earthy and urgent, with a ragged-voiced Gillespie pushed beyond his limits by the groove.

"Screamadelica" is a limit-breaking exercise in general, exploring a central question: what is ‘a band’ in the remix age? One reason the LP remains a classic is that its answer to this is so bold and open-ended, Primal Scream here is anything from a rock group having the time of their lives on "Movin’ On Up", to a vaporous but definite presence on "Higher Than The Sun (A Dub Symphony In Two Parts)". The scoffers’ question about "Loaded": is this really Primal Scream ? is firmly answered: it is if it feels that way. The fact that Primal Scream, and others, quickly retreated from this answer doesn’t make it less true. But even by 1992’s Dixie-Narco EP, the band were downplaying the clubbing influence in favour of something more rootsy, recording new tracks in Memphis. Ultimately, the group’s own preference for being a rock’n’roll touring unit, with associated debauchery, stopped them pushing harder on the doors "Screamadelica" unlocked. The record is in places ambitious, cosmic, showily wasted, but the thing it is most is a great party album. "Loaded", "Movin’ On Up", "Don’t Fight It, Feel It" are still immense dance-rock singles, and "Screamadelica" is one of alternative music’s great periodic rediscoveries of rhythm. Dance music threw open new wardrobes for British indie, and an inveterate dresser-up like Bobby Gillespie could, and did, take full advantage.