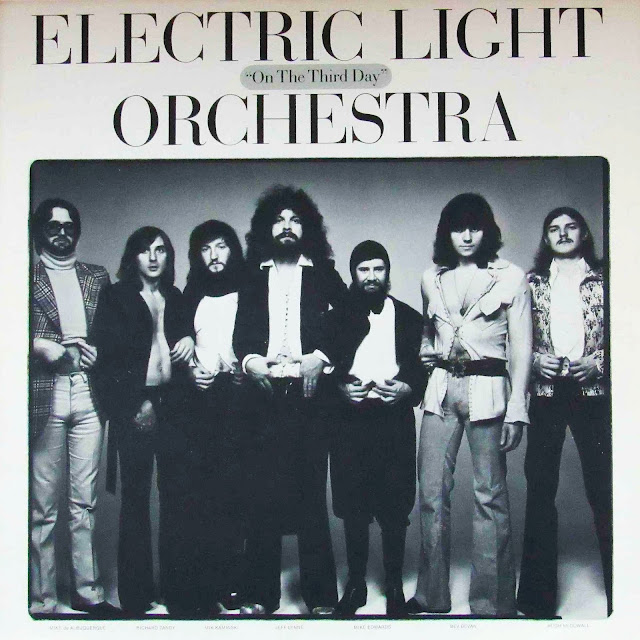 I really, really like this album by the Electric Light Orchestra. "On The Third Day", the band finally got it right, and this album initiates a glorious streak of constant winners that lasted all through the Seventies. The weirdest thing about it is that I actually remember seeing a Rolling Stone review of it that came out on the album's release, in which the author, while speaking more or less in favour of the album, was criticizing it for having shorter compositions than its predecessor and so lacking the epic character of "ELO II". Can you imagine it - Rolling Stone panning an album for not being enough pretentious ? Oh man, those were the days. Anyway, the compositions are indeed shorter, and they are generally more up to the point, concise, catchy and, well, rational than last time around. Not that Jeff Lynne had really figured out where he wanted to lead the band to; everything still sounds as if the only point of the band's existence was to prove that cellos and hard-rockin' electric guitars can live together within the limits of one song. But on the other hand, one can ask the same question such albums as "Abbey Road" - what's the point of "Abbey Road", for Chrissake ? What's the point of the medley on the second side ?

Okay, let me stop digressing. I find a lot of melodies on this here record to be creative and exciting, with Jeff Lynne managing to again recapture some of his early Beatlesque inspirations and going on to create something complex and lightweight at the same time. With pretty, memorable tunes like "Bluebird Is Dead" and "Oh No Not Susan" , and more or less convincing pieces of prog-boogie like "Ma-Ma-Ma-Belle" and "Showdown", this is a definite improvement over the endless clumsy orchestral jamming of "ELO II", and I'd easily recommend it - while it never features any particularly high points like there was on the band's debut album "No Answer", it is certainly more consistent than that record. Once and for ever, Jeff Lynne gave up on the idea of lengthy multi-part rock-classical suites, significantly simplifying and, I'd say, commercializing the sound, but without sacrificing its artistic value and uniqueness.

The pretentious compositions on here are mostly limited to the instrumentals; in particular, the album closes with the band's take on Grieg's "In The Hall Of The Mountain King", which is certainly inferior to the Who's chaotic, paranoid take now available on "The Who Sell Out" as a bonus track, but at least it hardly sounds like they were intentionally butchering the composition or something. Maybe six minutes is a bit too much, but for the most part of that time the musicians are inspired, and you can't deny the greatness of the theme in the first place. And "Daybreaker" actually rocks, too. Imagine that. Other than that, the tunes mostly fall into three groups: the more cosmically conscious ones, the ballads and the rockers. Needless to say, the ballads are the best among the bunch, since Jeff's Beatles influence couldn't yet go wrong, and would, in fact, only grow stronger in the nearest few years. "Bluebird Is Dead" is highly emotionally resonant, much as I dread to utter that word combination as applied to such an early ELO record - wonderful refrain, charming vocal harmonies, excellent "Eleanor Rigby"-type string passages, what else is needed ?

"Why do they say, Bluebird is dead" - Kudos to Mr Lynne for figuring out the essential principle - the secret of greatness often lies in nothing else than vocal modulation. Lower your pitch here, heighten it there, extend the right notes, do not, for God's sake, make it all sound like you're chewing an endless piece of gum, and you can't go wrong. Provided you got talent, of course, but I doubt even the worst enemies of Lynne would ever want to dispute that. And yes, "Oh No Not Susan", while slightly marred by primitive bored with high society pattern lyrics, is still equally soothing and filled with equally wonderful vocal hooks. The rocking tracks are somewhat more bizarre, as it's still hard to imagine a complex rocker highlighted by weirdly arranged strings all over the place. And yet, both "Showdown" and "Ma-Ma-Ma-Belle" chug along quite convincingly, although the latter is a bit primitive. Isn't it ? Lyrically, at least. "I got three or four babies sittin' on my knee ?" Pardon ? But on the other hand, it's the most obvious showcase for Jeff's electric guitar playing on the album, so it adds a little diversity.

And I simply love "Showdown" - the ominous string riff is unbeatable. It's the more ambitious tunes like "King Of The Universe" and "New World Rising" that slightly spoil the general effect of the album - they are way too erratic and too often get bogged down with their own pretentions and weirdness to be truly enjoyable throughout. But quite often, the vocal melodies are constructed carefully enough to justify the song's existence: "King Of The Universe", in fact, gives the impression of being an inferior re-write of the "10538 Overture" from the band's debut album. Not a thoroughly bad impression. In all, you should definitely give the record a chance to grow on you - for the first time in ELO's story, it is able to fully demonstrate us the band's magnificent songwriting skills (the existence of which I once foolishly doubted), and it is unquestionably one of the most well-balanced ELO records, giving you a brilliant sample of their classic sound without introducing you to any of their worst excesses and without being particularly boring. And I did become convinced that the inclusion of cello and violin players as official band members can be a good thing, too.