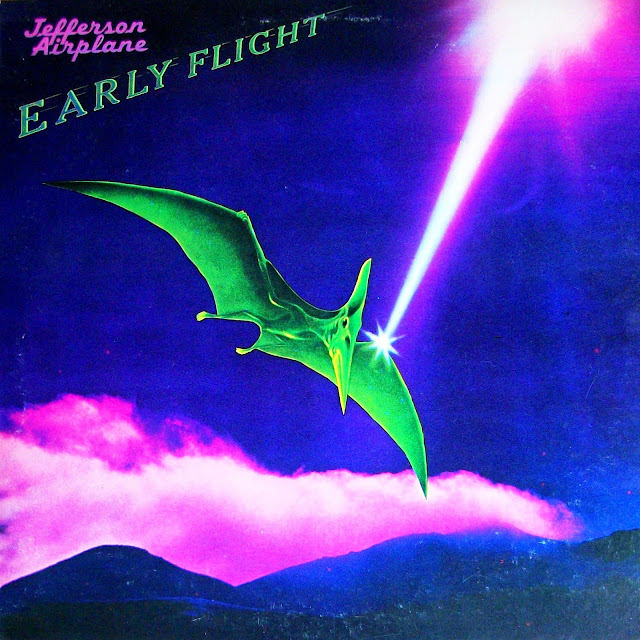 Contrary to legend, Jefferson Airplane weren't the first major band to have a rarities and outtakes collection released - earlier precedents like Traffic definitely come to mind - but they were certainly one of the first bands to prove such collections could be more than worthwhile. This stuff was released only a few years after the band's demise, and is quite short even for an LP, but nevertheless manages to briefly touch upon every aspect of the band's existence: the early pre-Slick days, the classic poppy 1967 period, the folksy revival of 1969, the proto Hot Tuna jamming, and the rambling, formless decline of the early Seventies. In fact, I couldn't heave enough praise on how classy the compositional structure of the record is - with its nine songs, Early Flight could show all these latter days thirty-track long CDs where only half of the songs are worth listening to and the other half have to be picked out like lice from an inmate's hair a thing or two - not to be naming any names, that is.

Not all the songs here are great, but some are, and every single one is at least mildly interesting. From the early days of the band, the Signe Anderson/Skip Spence epoch, you get a minor masterpiece, "High Flyin' Bird", a song that, for no apparent reason, had evaded album release before, but nevertheless turned into a live staple for the band (apparently it can be heard live performed by the Slick lineup on the "Monterey Pop Festival" album). That song just illustrates everything that was so great about the early band. Balin and Signe each share verses, with him enunciating everything in his takes some time to get used to shakey vulnerable voice and she ushering in a wall-rattling soulful delivery (a rare case, actually, when you can hear Signe singing lead - Balin was probably too jealous to let her do it more often). The other two early songs aren't that interesting, showing way too much dependence on the classic Byrds sound, but if you dig the early Byrds, you're guaranteed to dig these, two. They're just not as powerful as "High Flyin' Bird", 'sall. Still, like I've already pointed out above, 1966-era Airplane aren't just a carbon copy of the Byrds - they've got radically different vocal stylistics, and their love for echoey production and Cassidy's rumbling moody basslines all make their approach significantly darker than McGuinn and company's.

"In The Morning" is a nice, if not breathtaking, early example of a blues jam, with Jorma (who else) taking lead vocal and John Hammond contributing harmonica runs. Then again, the Airplane's bluesmaking was never breathtaking, but Jorma always made sure there was a little creepy swampy feel about their mucking around, and this one's no exception. His trademark vocals are already firmly in place as well. In case you're not aware, Jorma's trademark singing is in accord with a simple principle - "keep your mouth tightly shut and your nose widely open". A pretty defiant, if not all that unique, approach to singing. The "Surrealistic Pillow" era is represented by the Skippy reject "J.P.P. McStep B. Blues" (you could tell Skippy wrote the tune by merely looking at the title, couldn't you ?), a decent, but not too hook-filled folksy shuffle (cool friendly harmonies on that one), and particularly "Go To Her", the second great lost gem on here. One of the Airplane's most energetic, dazzling rockers ever, with the entire band working as one tightly oiled mechanism, something they really could only demonstrate on "Surrealistic Pillow" before cracking and splitting under the influence of too much acid - Balin and Slick duet on here and, once again, bring out the best in each other, and each verse climaxes in that mega-powerful "Go To Her", she lies waiting for you!' scream that, in a better epoch, could serve as the Airplane's visit card just as well as 'Don't you need somebody to love!'.

Next there's another jam ("Up And Down"), this time drifting off into more a funk/hard-rock direction - actually, it's more of a Hot Tuna number with Balin guest sitting on lead vocals, and that's the only minus because frankly, Balin isn't much of a cock-rockish screamer, he sounds like a watered-down version of David Coverdale on this track. Apart from that, they get a grizzly heavy rock sound going on that's almost nearly in the Led Zeppelin ballpark, and could have been right out there had Jorma simply bothered to lower the guitar tone just a wee bit more. Then again, Cassidy's elephant herd like bass sort of compensates for that. And the track just keeps growing, with Jorma and Kantner getting it up, adding extra distortion and, towards the end, going funkier with the wah-wah and stuff and really getting it on. Whether you like it or not, it's inarguably the heaviest thing to bear the Jefferson Airplane moniker, and that alone deserves a listen or two.

Finally, there's a late 1970 single included - incoherent and unmemorable, like pretty much everything the band did from 1969 on, but at least energetic and inspired-sounding like the best tracks on their two last albums rather than lethargic and directionless like on "Volunteers". The Grace-dominated "Mexico" is my favourite (because the more Grace there is, the more you can count me happy), but Kantner's "Have You Seen The Saucers" is not that bad either - particularly due to some blazing guitar work from Kaukonen. Much of this album has been incorporated into later anthologies and compilations and boxsets, so I've heard, but if you're a completist and don't care much for compilations, you can get this without any fear of being ripped-off. In fact, hey, I don't mind if anybody uses this as an introduction to the Airplane, strange as that may sound. Diverse, well-recorded and well mastered on CD, it will provide you with more insight into the band than the brief bits of Woodstock which usually initiate people into the Airplane mythology.