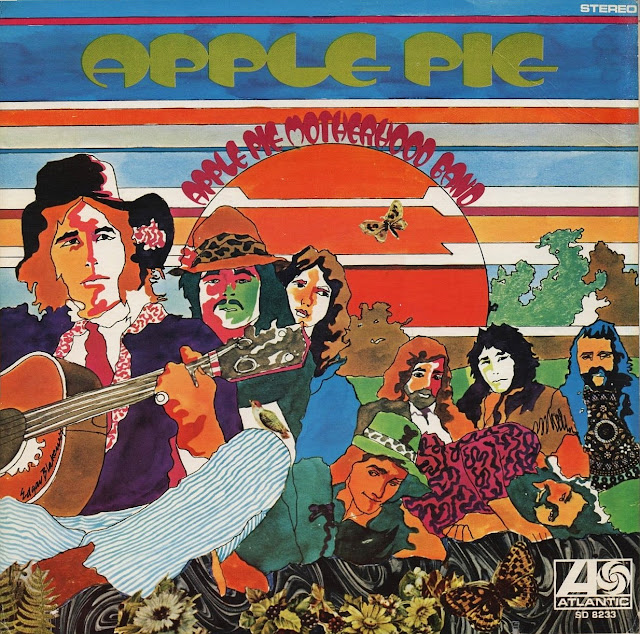 New York-by-way-of-Boston group the Apple Pie Motherhood Band were among the earlier psychedelic and heavy rock acts signed by Atlantic Records. Their self-titled late-'60s debut LP (also reissued on CD by Collectors' Choice Music) mixed hard rock jamming and shorter, more pop-folk-rock-influenced songs to, as keyboardist Jef Labes puts it, produce a sound "like the energy of an East Coast version of what was up in San Francisco at that time." Those qualities were also found in their second and final album, Apple Pie, though with a pronounced tilt toward a heavier hard rock/R&B direction. In part that was due to a changeover in personnel that saw one member of the lineup from the first LP leave, and three new musicians join the group.

The Apple Pie Motherhood Band had already gone through a couple of personnel changes by the time their first album was finished. Original lead singer Anne Tanzey, who sang lead on their first 45, departed before the LP, and replacement Marilyn Lundquist only lasted a little while, the guys in the band ultimately handling the album's lead vocals themselves. Before Apple Pie, rhythm guitarist Joe Castagno left, as he "basically wasn't very well suited to the road," lead guitarist Ted Demos explains. "He didn't like it a bit. He just decided that he wasn't cut out for that kind of lifestyle at all." Fortifying the lineup would be new singer Bruce Paine, along with guitarist Michael Sorafine and harmonica player Adam Myers. Producing was Tom Dowd, engineer on countless Atlantic Records sessions dating back to its origins as an R&B/blues label, and recently starting to assume more duties in the production chair.

"I came in when they had heard about me playing  in the basket houses in Greenwich Village, and they were looking for a singer," says Paine today. "They came down to the Cafe Wha? one night and saw me, and we met later. They basically said, 'Hey, you want to sing rock and roll?' I had been playing folk music up to that point, and it sounded like a good idea to me. I had just finished going round and round with RCA Records. Initially I had signed with RCA for a solo album, and the producer I was working with went independent. They wouldn't let me use him as an independent; they were giving me some old guy that was orchestrating stuff. So I was like, 'Okay, I want out of here.' They came at the right time with the right offer, and it was an instant love affair. Michael was pretty much doing the same thing I was doing, playing music around the Village. We had a whole crew of people that just hung out, and the band was kind of like, 'Come on along, why don't you join the band for a while? We're going on tour.' Michael had some really strong songs he had been writing, and they just said, 'Hey look, c'mon in. Let's make it two lead singers up front, and we like your material.'"

Adds Bruce, "Now Adam was a trip. We met Adam in Chicago when we were playing a place called Rush. Ted grabbed me one night after the show and says, 'Hey man, you gotta come meet this guy. There's this harp player I met the other night in a dryer.' I said, 'What do you mean, in a dryer?' He said, 'Yeah, he was tumble-drying himself and playing the harp.' And I said, 'Okay, I gotta check this out.' So there's some old railroad tracks back up behind Rush Street [where] we went looking for him. For some reason, Ted knew where to find him. And I heard this wailing harp coming down the tracks, just couldn't believe how good it was. So there's Adam. Adam I think took too much acid. He was out there from day one, from the moment I met him. We'd slap him on the back, 'play Adam,' slap him on the back, 'stop Adam,' and that was his participation. He did one tour with us and hung out in Vermont while we put together the second album, and of course he's all over it."

Though Jef Labes had written more of the band's original material than anyone else on the first album, he penned just one track on Apple Pie, "Super Music Man." Sorafine wrote two songs, "Orangutang" and "Grandmother Hooker," and co-wrote another, "He Turned You On," with a friend from outside the band, Don Henny. Other than Demos's "Gypsy," the rest of the record was devoted to R&B covers, including Willie Dixon's classic "I Just Want to Make Love to You" (originally popularized by Muddy Waters), Chuck Berry's "Brown Eyed Handsome Man," and the Temptations' "Get Ready." As Labes observes, "By the time we added vocal power with our new personnel, they brought with them lots of tunes, especially Michael, who years later and at the time, was a well-liked collaborator of mine. Consequently my contribution was much less on the second album, which was a strange series of sessions, and undoubtedly a misuse of the talents of Tom Dowd, the legend."

"He was tearing his hair out," says Paine about Dowd. "We were a bunch of acid freaks loaded to the gills trying to lay down tracks, and Tom was in the booth trying to make sense of it. I think at the same time, he was producing Aretha [Franklin] and Cream, and of course Cream was their own bundle of fun and games too. So by the time he got to us at nighttime, he was pretty stressed. It was amazing that the album got done. We were even more amazed that it got released. And when they released it, I think Tom left the mixing to one of his assistants, 'cause the mix wasn't anything close to what we had hoped or thought it would be". "I wasn't really happy with the mix," concurs Demos. "But there were some things on it that reflected what I wanted to do at the time. I liked 'Gypsy' a lot, even though it never came together the way I wanted it to, for one reason or another. I brought in the violin player, who I'd been introduced to by this crazy friend of mine, who was a player from the New York Philharmonic. That was my sort of rude awakening that classical musicians don't necessarily improvise all that well. The results were kind of sketchy, but I liked that tune a lot; I was pretty happy with that."

Remarks Paine, "I liked 'Get Ready' a lot. The one thing I'm totally displeased about is we recorded 'Hello Stranger,' the old Barbara Lewis number [a #3 hit in 1963]. I heard it once on the radio. Never got a copy of it, never heard it since. They've lost it in the archives, and it was probably one of the best vocals I did in those days. I never got to hear the damn thing past one short clip on the radio." The Apple Pie Motherhood Band, however, would not be together for long after Apple Pie came out, in part because of problems surrounding its release. "By the time this album was ready for release, [manager Marvin] Lagunoff had gone to war with us for moving to Vermont, settling on a farm, and booking our own dates at local colleges," says Labes. "Therefore, under his direction, the company held back shipment of the second Apple Pie album." In addition, Jef reveals, "Meanwhile, Ahmed Ertegun at Atlantic had the idea to do an album with a trio of amazing rock guitarists.  He chose for this project Eric Clapton, Mike Bloomfield, and Ted Demos. Unfortunately for Ted, this idea got lost along the way."

Paine thinks the band must have broken up by the summer of 1969, considering his memory of the following incident: "I was walking down Bleecker Street [in Greenwich Village], and I saw a Volkswagen van with California plates on it. I walked up to the guy and asked him when he was heading to California. He said, 'Well, I'm going to San Francisco in an hour.' And I said, 'Wait a minute, I gotta go back to my hotel. Can I ride with you?' I think by June, I was in the San Francisco production of Hair." Demos and Paine are still playing music together today, and even living in the same neighborhood, Paine working on a book titled Rock'n'roll Chronicles, aka Almost Conscious. Drummer Jack Bruno has toured and recorded extensively with Tina Turner and Joe Cocker, and Labes went on to play on several albums by Van Morrison in the 1970s and 1980s, as well as some of Bonnie Raitt's 1970s LPs. As for the Apple Pie Motherhood Band's legacy, Labes summarizes it this way: "We did in many ways embody the spirit and feeling of the movement for change of that period of drug enhancement, sexual freedom, and the politics of peace."