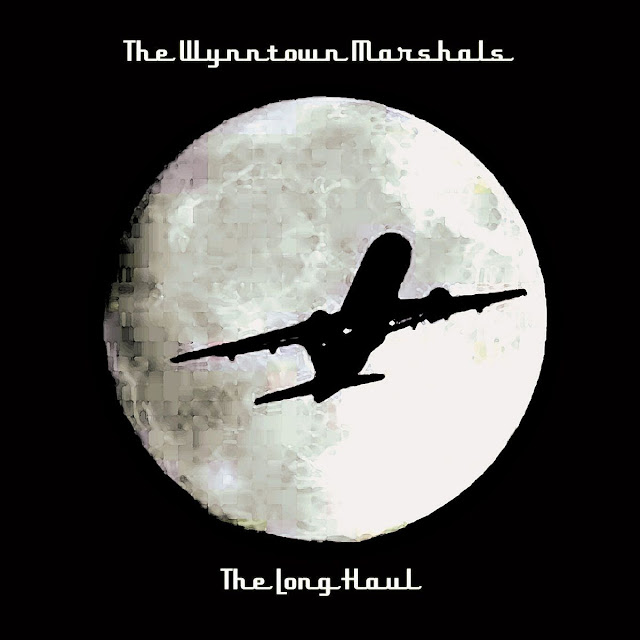 Ever since 2007, a little corner of Edinburgh has resembled Nashville, Tennessee. 2007 was The Wynntown Marshals, Scotland’s most practiced purveyors of country rock were formed. Since then, The Wynntown Marshals, have been fusing poppy hooks and a pedal steel to create their own unique brand of swaggering country rock. Influenced by Gram Parsons, Neil Young, The Jayhawks, Wilco and Glasgow’s very own Teenage Fanclub, The Wynntown Marshals draw inspiration from the past and present. That’s apparent on their sophomore album The Long Haul, which was recently released on Wynntown Recordings. Long Haul describes The Wynntown Marshals six year musical journey, which I’ll tell you about. The Wynntown Marshals’ roots are in Edinburgh, Scotland’s other city. That was where the band were formed. They were brought together by a love of country, rock and alt-country. Originally, the lineup consisted of drummer Kenny McCabe, bassist Murdo MacLeod, guitarist Ian Barbour, keyboardist Richie Noble and lead vocalist Keith Benzie who plays guitar and harmonica. Influenced by Neil Young, Gram Parsons, the Rolling Stones, Wilco and Teenage Fanclub, The Wynntown Marshals started spreading their musical message.

From June 2011, right through to winter 2012, The Wynntown Marshals found themselves dividing their time. Much of their time was writing their sophomore album, "The Long Haul". Then there was the preproduction work on The Long Haul. However, they couldn’t let their profile drop. In the midst of working on "The Long Haul", The Wynntown Marshals toured Britain, Germany and Holland. They did this both as a band and with just lead vocalist Keith Benzie and guitarist Ian Sloan. On their return home, work began on "The Long Haul". When recording of "The Long Haul" began, there was another change in the lineup. Guitarist and pedal steel player Iain Sloan joined a rhythm section of drummer Kenny McCabe and bassist Murdo MacLeod. Richie Noble plays keyboards lead vocalist Keith Benzie who plays acoustic guitar and harmonica. Other changes are the addition of a banjo, mandolin, melletron and multilayered harmonies. These changes bring a new side to the The Wynntown Marshals’ music on "The Long Haul", which I’ll tell you about.

"Driveaway", which opens "The Long Haul", is the story of an adolescent road trip. A 3000 mile adventure and coming of age, you can imagine it unfolding before your eyes. Keith Benzie’s lyrics paint pictures. As he delivers them, it’s as if he’s reliving every minute. This he does against a swaggering country rock arrangement. So this means, crystalline and scorching guitars, pounding drums and a wash of Hammond organ. They provide a dramatic backdrop to roller coaster of a road trip. Canada sees The Wynntown Marshals draw inspiration from everyone from Wilco, The Jayhawks and Teenage Fanclub. With jangling guitars and driving drums for company Keith’s vocal is tinged with loneliness and regret. Heartfelt harmonies accompany him, as seamlessly, thanks to a couple of slick chord changes The Wynntown Marshals move through the gears. Stabs of piano and searing guitars are joined by pounding drums as emotion and drama. Add to that slick, poppy hooks and the result is heart-wrenching example of authentic Americana.

"Low Country Comedown" could just as easily be a track from any of the giants of alt-country. It’s not. Instead, it’s from Edinburgh’s purveyors of country rock. Here, they’re are at their best. That’s no surprise. Keith draws upon their experience for the lyrics, describing their trips to Europe. The song has a much more understated sound. A weeping pedal steel and harmonies accompany Keith’s wistful vocal. Then as the song progresses, there’s even a Beatles’ influence as alt-country, classic pop and country rock combine to create a melancholy tale of a Band On The Run. Understated. That describes "Whatever It Takes". Just an acoustic guitar accompanies Keith’s melancholy vocal as drums mark time. Chiming guitars and harmonies sweep in as Keith realizes his relationship’s all but over. The big clue was when she was more interested in her book than him. Not a good sign. He’s not going to be beaten, and will do "Whatever It Takes" to keep her. As his vocal drops out Hammond organ and crystalline guitars add to the sense of melancholia and sadness on this beautiful tale of love that’s all but lost.

"Tide" features lyrics written by Murdo MacLeod. It’s very different from anything that’s gone before. Think seventies west coast rock and alt-country combine with Neil Young and Crazy Horse. The song allows The Wynntown Marshals to stretch their legs and showcase their considerable talents. None more so than Iain Sloan. whose reborn as Neil Young. Holding things together are drummer Kenny McCabe and bassist Murdo. Keith adds a languid vocal as the rest of the band add cooing harmonies, while The Wynntown Marshals pay a fitting homage to Neil Young and Crazy Horse in their prime. With just acoustic guitars accompanying Keith’s pensive vocal "The Submariner" unfolds. Its understated sound is replaced by a bass driven arrangement where weeping, chiming guitars accompany Keith, who sounds not unlike Wilco’s Jeff Tweedy or The Jayhawks’ Mark Olson. That’s how good Keith’s vocal is. He breathes life and meaning into his lyrics. So much so, you can imagine the tragedy unfolding, and "The Submariner" panicking, struggling for breath and realizing what fate held for him. Moving, emotive and harrowing, it’s a showcase for Keith’s songwriting skills and vocal prowess.

Straight away, "Crashing (Like the Reds)" has an anthemic sound. That’s apparent from the opening bars. Drums pound, guitars chime and subtle chord changes introduce Keith’s impassioned vocal. As guitars soar and sear, drums pound and the evocative sound of a Hammond organ adds to this anthemic, hook-laden slice of alt-country. It’s the type of song that’s perfect for an encore. "Curtain Call" sees The Wynntown Marshals unplug and Keith take on the guise of an old-fashioned story teller. It’s a song with a Nashville-esque pedigree. Keith’s throaty, wistful vocal tells the tale of a down at heel magician, whose life took a wrong turn, when a trick went wrong. He’d been warned about the bullet trick, but knew better. Now he’s ashamed and alone, a shadow of his former self. All he’s got are a needle and his memories for company. He uses one to blot out the memory of the other, which reminds him who far he’s fallen. Then as the song heads to a close, Keith sings the line: "I never thought I’d pick up this revolver again, maybe soon I’ll be with you again, it’s over". A heartbreaking take full of hurt and heartache, it’s one of the highlights of "The Long Haul".

As if determined to lighten the atmosphere, "North Atlantic Soul" bursts hopefully and joyously into life. Featuring lyrics from Murdo MacLeod, seventies west coast rock and alt-country combine. Listen carefully and The Eagles, Wilco, The Jayhawks and even Teenage Fanclub can be heard. Poppy hooks, pounding drums, chiming, crystalline guitars and multi-tracked harmonies accompany Keith’s heartfelt, husky vocal as The Wynntown Marshals prove to be the keeper of alt-country’s flame, on this slice of pop perfection. "Change Of Heart", which closes "The Long Haul" sounds as if it’s a long-lost track from Neil Young. The only difference is Keith’s vocal. No wonder. Nobody sings quite like Neil Young. Keith’s vocal is heartfelt and impassioned. Apart from that, The Wynntown Marshals could easily be Crazy Horse. That’s how good they are. From Iain Sloan’s weeping guitars, drummer Kenny McCabe and bassist Murdo MacLeod, a glorious slide of country rock unfolds. Adding the finishing touch are soul-baring harmonies and lush strings. This results in the perfect way to close "The Long Haul", the long awaited sophomore album from The Wynntown Marshals.

Three years after the release of their debut album "Westerner", The Wynntown Marshals were back and better than ever. During the past three years, they’ve honed their sound within an inch of perfection. They were tighter than ever before, playing with confidence and often, a gallus swagger. That makes them unmistakably Scottish. In some ways, that’s the only Scottish thing about The Wynntown Marshals. They don’t sound like a band from Edinburgh, a city that’s hardly famous for its musical heritage. No. For its size, Edinburgh has underperformed when it comes to producing top class bands. It hasn’t produced as many big bands as it should. Granted there’s The Proclaimers and some years ago, The Fire Engines, but that’s it. Maybe that’s about to change. The Wynntown Marshals are leading the charge for Edinburgh bands, while The Holy Ghosts are following in their footsteps. Ironically, The Wynntown Marshals music has more in common with America. It’s almost an accident of birth that The Wynntown Marshals are an Edinburgh band. They sound as if they’re Nashville born and bred. Other times, they sound not unlike Neil Young and Crazy Horse in their prime. Even lead vocalist Keith Benzie’s doesn’t sound Scottish. The same was said of Teenage Fanclub in the nineties and noughties. So this isn’t a new phenomenon. Let’s just hope The Wynntown Marshals enjoy the same success as Teenage Fanclub enjoyed.

With their slick, poppy hooks and unique brand of swaggering country rock, The Wynntown Marshals look to be on the right road. No ifs and no buts. They’re in it for "The Long Haul", and since 2007, have been Scotland’s most practiced purveyors of country rock. The last few years have been time well spend for The Wynntown Marshals, whose gallus, swaggering brand of country rock is guaranteed to find favor with fans of Americana far and wide. Standout Tracks here are "Whatever It Takes", "Curtain Call", "North Atlantic Soul" and "Change Of Heart".