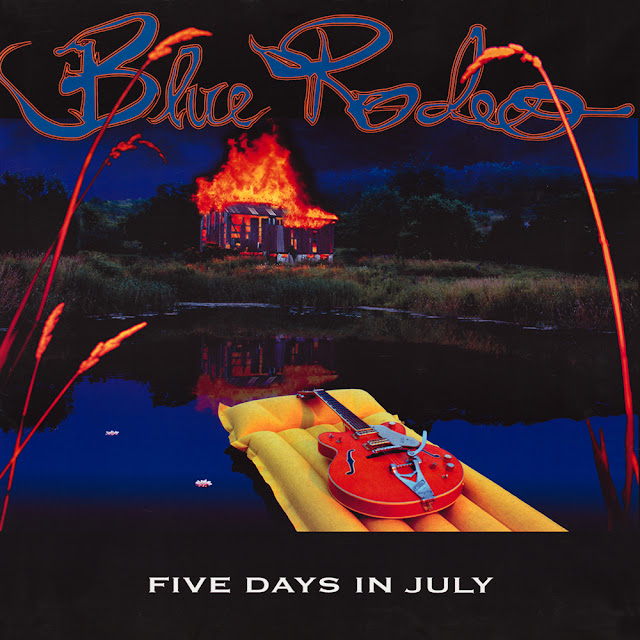 Having clocked countless miles in their decade-long career, through enough endless highways and stuffy studio sessions to fill an epic documentary, the songs of multi-platinum-selling artist Blue Rodeo have cut a wide path in their native Canada. But after such hit albums as "Five Days In July" and "Nowhere To Here", the band found a way (as well as a need) to reinvent themselves, and their music. They have released 15 full-length studio albums, four live recordings, one greatest hits album, and two video/DVDs, along with multiple solo albums, side projects, and collaborations. High school friends Jim Cuddy and Greg Keelor began playing music professionally together after completing university. They put together several bands without commercial success in the late 1970s, releasing a single as Hi-Fi's in 1980.

Cuddy and Keelor moved to New York City in the early 1980s to further their music careers. There they met keyboardist and fellow Canadian Bob Wiseman, who was at that time working as a producer. Upon returning to Toronto in the summer of 1984, the trio decided to form a band. The name "Blue Rodeo" had already been chosen for the new group when they met former David Wilcox drummer Cleave Anderson and asked him to join. Anderson in turn recommended his former bandmate in The Sharks, bassist Bazil Donovan, and the new band's lineup was essentially set. In 1985 Blue Rodeo played their first show together at The Rivoli in Toronto; one week later, they performed at Handsome Ned's "Honky Tonk Heart".

The band quickly earned a following in Toronto and was subsequently signed to Canadian independent record label Risque Disque. They entered the studio in 1986 with Rush producer Terry Brown and recorded several songs that would comprise Blue Rodeo's debut album, "Outskirts". Released in March, 1987, "Outskirts" met with moderate success in Canada, until "Try" was released as a single in October of that year. The single was an immediate hit, going to number one on the RPM Country Tracks chart and number six on the RPM Top Singles chart, establishing Blue Rodeo as one of Canada's top new bands and carrying "Outskirts" to 4× Platinum status in sales. The music video for the single featured Keelor's then-girlfriend Michelle McAdorey, who would soon enjoy success with her own band Crash Vegas.

In 1992, the band's song "After the Rain", written by Cuddy and Keelor, was the most-performed song in Canada. By 1999 the band had sold more than two million albums in Canada. Cuddy, Keelor, Donovan and Cripps have all released solo albums, and Glenn Milchem performs his own solo music under the pseudonym "the swallows". Keelor has also gone on to produce for other artists, notably alt-country group Cuff the Duke, who have also toured as support for Blue Rodeo. Blue Rodeo members have collaborated extensively with other notable Canadian artists, including Sarah McLachlan, The Tragically Hip, Burton Cummings, Great Big Sea, Jann Arden, The Sadies, Skydiggers, Cuff the Duke, Crash Vegas, Cowboy Junkies, Sarah Harmer, Jill Barber, and Kathleen Edwards. They have won many Canadian music awards, including seven Juno Awards and seven Socan awards.

On June 16, 2009, it was announced that the band would receive a star on Canada's Walk of Fame in Toronto. The induction ceremony was held on September 12, 2009. They are the fifth band to receive the honour. Blue Rodeo was inducted into the Canadian Music Hall of Fame at the 41st Juno Awards on April 1, 2012,[9] joining other Canadian music icons including Rush, Leonard Cohen, Neil Young, The Band, Oscar Peterson, Bruce Cockburn, Daniel Lanois, Joni Mitchell, Anne Murray and Tom Cochrane. According to CARAS, on selecting Blue Rodeo as the 2012 inductees, “Spanning nearly three decades, Blue Rodeo has sold in excess of four million records and won an unprecedented 11 JUNO Awards, establishing themselves as one of the premier groups in Canadian music history.”

In May 2014, the band received a Governor General's Performing Arts Award (GGPAA) for Lifetime Artistic Achievement, Canada's highest honour in the performing arts. At the Gala honouring GGPAA recipients on May 10, the band delivered the evening's surprise finale. On August 5, 2013, former keyboard player James Gray died as the result of a heart attack. He was 52 years old. Canadian guitarist Colin Cripps joined Blue Rodeo as a full member in 2013, due to Greg Keelor's inability to play electric guitar live any more, caused by hearing issues. In September 2015, Blue Rodeo released the protest song and video "Stealin All My Dreams" which "chronicle the failings of the current government", referring to the government under Prime Minister Stephen Harper.

Blue Rodeo songs exist in that weird slope between country and rock, with a healthy dose, at least conceptually, of psychedelia. Where other bands might drive a song on all fours with obvious signposts to bridge, verse and chorus, Blue Rodeo always find a unique side-road to explore. What with the new wave of county-folk-punkers gaining their own moniker, No Depression, Blue Rodeo's brand of country rough-and-tumble seems to fit the genre. Not quite. "We come from more of a psychedelic pop background," explains Keelor. "The imprint of songs for us is related more to 60s pop than country music. We came to country after all that 60s music was already in our minds. We put banjo (not to mention Chamberlein and Mellotron) on so many songs for the feel, the groove. We're looking for textural changes from that past that are more pop and rock oriented."

"We've come to a peaceful resolution," says Cuddy. "When you're a band for a long time you inevitably suffer from constantly giving your contribution over and then having it altered by the group, where it's rejected, or changed. Eventually people get so pissed off. In the last year we've done our own thing, which was incredibly beneficial. Now we're getting our rocks off knowing that we make a singular sound. That's very satisfying." "We didn't get so obsessed with details this time," concludes Keelor. "We just played it to friends and made casual decisions. We've labored so much in the past. You can get so nuts you don't have any idea of how it's going to sound six months from now. We were a lot more playful this time, and the result is a lot more enjoyable."

"Five Days in July" was the fifth studio album by Blue Rodeo. It was released by WEA on October 26, 1993 in Canada and Discovery Records on September 27, 1994 in the United States. The band's most commercially successful album, it has been certified six times platinum as of 2008. The album was recorded on singer/guitarist Greg Keelor's farm in Southern Ontario in July 1993. While the band originally intended for the recordings to serve only as demos, they found that the songs had a warmth and spontaneity that warranted releasing the collection as an album. Guest musicians on the album include Sarah McLachlan, Colin Linden and Anne Bourne. This album was keyboardist James Gray's first album with the band. This album is supposed to be a tribute to the Harvest-era Neil Young sound. "5 Days in May", "Hasn't Hit Me Yet" and "Bad Timing" were notable hit singles for the band.