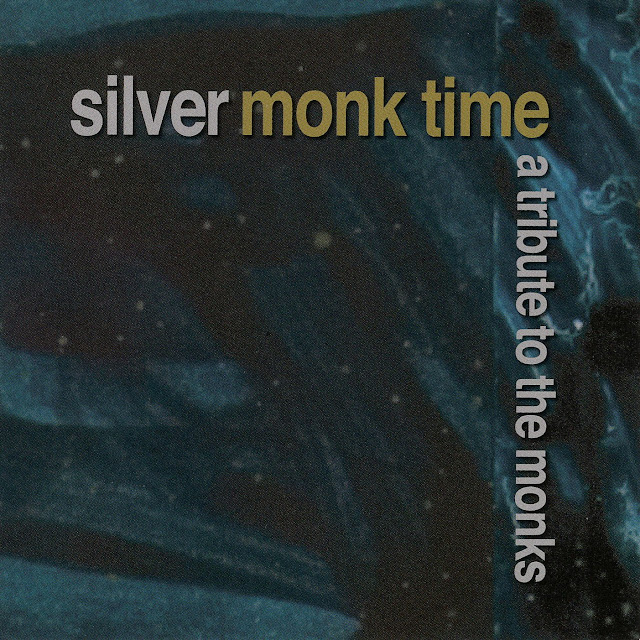 "Silver Monk Time" was a brilliant contribution album that had been released after the triumphant return of the original 60's legend Monks, when their documentary "The Transatlantic Feedback" found its way to the cinemas over the world. The film was produced by Play Loud! Productions and shot on location in the USA and Germany between 1997 and 2002. In 2008 the filmmakers obtained the German TV Oscar, the Adolf Grimme Awards. After the Beatles conquered the world, America responded with the Monkees, a friendlier version playing Brill Building hits. Inversely, in Germany, a pair of avant-garde geniuses (Walther Niemann and Karl-H. Remy) conceptualized the monks, a group of bizarre anti-Beatles who would write their own dark minimalist rock. The gifted band, a group of five Americans who had recently finished their U.S. military service at a German base, had honed its skills by playing up to 40 hours a week in the same beat clubs that provided the Beatles’ training. The musicians’ new managers dressed them in black, shaved their heads like monks, provided them with a series of manifestos, and coached them to reconfigure their band to feature tribal drumming, feedback and electric banjo. Somehow, this resulted in one of the greatest albums in rock history. Despite experimenting with minimalism, tension and antipop sensibilities (backup vocals are sung in creepy unison instead of sweet harmony), the record is danceable and joyous.

One of the most fascinating aspects of the film is seeing the five contemporary monks discussing the history they had all buried upon returning to America in 1967, after the band’s dissolution. Larry Clark, the Chicago-bred Rhythm'n'Blues keyboardist, won’t allow himself to attach any significance to his work with the monks. Absurdly, of the five articulate interviewees, only guitarist and lead singer Gary Burger is willing to attribute political significance to the Vietnam lyrics in their theme song. With this lack of singular vision, it’s not surprising that the filmmakers framed their story by focusing on the conceptualists’ vision. The film was well received by critics. Chris Morris of The Hollywood Reporter named it a "penetrating and loving documentary". Dennis Harvey of Variety praised that "Helmers do a vivid job etching the creatively fervid times, with an editing style whose dynamism echoes that of Monk music". New York critic and John Cage expert Richard Kostelanetz compared it with the documentary film Comedian Harmonists (1976) by Eberhard Fechner: "The Transatlantic Feedback" vividly recalls several American military veterans who in the early 1960s formed in Germany a short-lived proto-punk rock group calling themselves the Monks (and cutting their hair appropriately). Much like Eberhard Fechner’s great documentary about the Comedian Harmonists, the film, through individual interviews made decades later, neatly documents not just how they came together and fell apart, but the remarkable performances they did in between. This film is moving, informative, and unforgettable.

In conjunction with the film play loud! productions initiated a double CD tribute record by the title "Silver Monk Time - A Tribute To The Monks". This record served as financial support to the film and was released officially on October 23, 2006 at the famous Volksbühne in Berlin (Germany). At the same event the film was premiered to a full house. play loud! also had invited The Monks and some special guests from "Silver Monk Time". For The Monks it was their first live performance in Germany for almost 40 years. After the film screening The Monks were received with standing ovations by a frenetic audience. Special guest musicians Mark E. Smith (The Fall), The Raincoats, Schorsch Kamerun (Goldenen Zitronen) and Peter Hein (Fehlfarben) celebrated together with The Monks their comeback. Among the audience were also some of the old collaborators, such as, Walther Niemann, Wolfgang Gluszczewski and Jimmy Bowien.

"Silver Monk Time" was both a tribute record to the German-American beat band The Monks and the soundtrack to the award winning film "The Transatlantic Feedback". The record was produced and compiled by the filmmakers Dietmar Post and Lucia Palacios. It was released in October 2006. The official record release was part of a major event at Berliner Volksbühne, (Germany). Play Loud! Productions not only premiered "The Transatlantic Feedback" but also invited renowned guest musicians to join The Monks on stage to what would be their first German live show after almost 40 years. The title "Silver Monk Time" came about due to a rumor that after the release of "Black Monk Time" in May 1966 The Monks already had initiated work on what was supposed to be their second LP. One beat accompanied by one continuous feedback was supposed to have spread out on two LP sides that would be known by the title "Silver Monk Time".

For the new "Silver Monk Time" it was decided no to do a standard tribute record by just having the original songs covered. The participating 29 bands were explicitly asked to experiment with the Monks concept. Famous German electronic avant-garde band Mouse on Mars wrote in the detailed booklet to the record: "Mouse on Mars have tried to prove that after the deconstruction of the Monks their undeniable influence on 21st-century pop music has been proven. Rhythm, sound and melody grow together to a stream of lava on which the energy laden music surfs down into the valley of Dionysus by tearing down mirror balls like apples from trees." The Neue Zürcher Zeitung wrote: Artistically similar, creative and intrepid as the Monks, their grandchildren stand for a form of pop music in which can be discovered aesthetic and musical daring, which unrelentingly sets a tone for its own satisfaction.

The Village Voice is convinced that: "The Uberbeat (and a war or two) goes on. "Silver Monk Time" buys us all some more hop time, finally". The Wire mentioned "Silver Monk Time" among the best compilation records of the year 2007: "Unlike many tribute projects that fall flat due to those involved being either overawed or ignorant of the original material, Silver Monk Time succeeds because the participants have taken the group's primitive rock surge as a template to experiment with. As a result the sound of The Monks is treated to a 21st century workout with synthesizers and beat tracks threaded through the original quartet's already way out psychotic minimalism“. The artwork to Silver Monk Time was created by Lucia Palacios and is based on the motif of the "The Transatlantic Feedback" film poster by German painter Daniel Richter. There have also been two 7" single releases taken from "Silver Monk Time": 1) "Monk Time" by Alec Empire and original Monks singer Gary Burger and "Higgle-dy Piggle-dy" by The Fall. 2) "Drunken Maria" by Gossip and "Monk Chant" by The Raincoats.