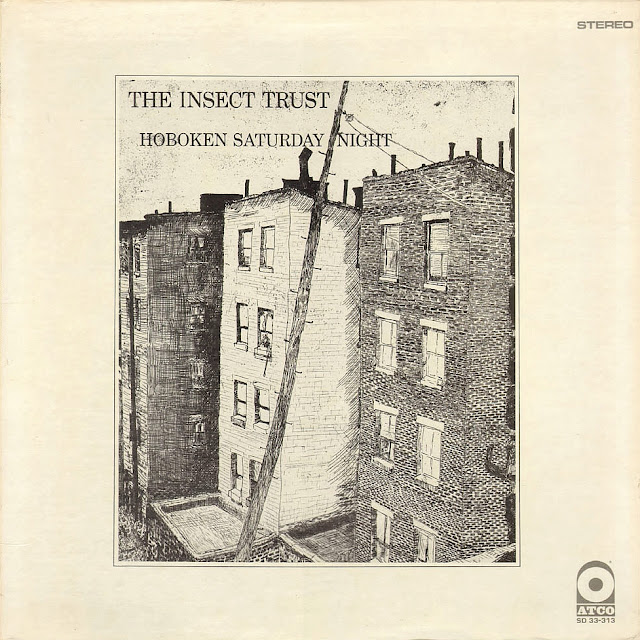 So declares Nancy Jeffries, shareholder of the Insect Trust, which congealed in Memphis circa 1966 and melted away in Hoboken by 1971. Strictly speaking, "everybody" was a quintet. Jersey-born Jeffries was the singer, sucked into the Memphis scene after her first band secured a residency in Fayetteville, Arkansas, and abandoned their trek to San Francisco. There she met reed player/rock critic Robert Palmer and fell for Skip James rediscoverer and guitar acolyte Bill Barth. Soon Barth and Jeffries visited New York and wound up renting a place in the same cheap old Hoboken building occupied by Luke Faust, who joined them on banjo, fiddle, and harmonica after they all shared a brief fling with Peter Stampfel's Holy Modal Rounders. Back in came Palmer, who had moved north after college and was writing for a radio-financed freebie masterminded by the guy who later gave the world Lifestyles of the Rich and Famous. New Orleans-born saxophonist Trevor Koehler hooked up via a crazed Memphis beatnik they knew. The quintet included at least two superb musicians: Barth, ranked by James biographer Stephen Calt with the devil man himself, and Gil Evans regular Koehler. But it did not include a rhythm section. This made it hard for them to play out, as did their tendency to traipse off to Tennessee. But it also threw them in with some unlikely sidemen. Drummer Buddy Saltzman, superbassist Chuck Rainey and rhythm guitarist Hugh McCracken, the hired hands on Capitol's 1968 The Insect Trust, were renowned studio cats who also backed, for instance, the Archies--which is less surprising when you learn that manager Steve Dubow came aboard straight from the Cowsills.

The long-lost 1970 masterwork you've purchased is more ragtag; Joseph Macho and Charlie Macey, for instance, have passed into obscurity. But in addition to nonpareil r&b drummer Bernard "Pretty" Purdie (who's on the debut too), Atco reimbursed contributors including avant bassist William Folwell (Albert Ayler, Buddy Guy), pro bassist Bob Bushnell (Mickey & Silvia, Ian & Sylvia) and, on two tracks, Elvin Jones, the premier jazz drummer of our time. In 1998 interviews posted by the Perfect Sound Forever netzine, Barth--amid claims that he was "never really a big Insect Trust fan" and that the project must have been a failure because its sole purpose was "making plenty of money"--hits paydirt: "I consciously tried to keep the musical ideas separate and distinct. Fusion music was beginning to happen in those days, and I personally regarded it as mush." Note that Barth assumes leadership of this band he didn't like, the one Jeffries just called "everybody's." Note that Jeffries has also recalled, "Bill was the leader because he was the biggest asshole." Compare Faust's analysis: "The band was a democracy--Bill was the leader but he was laid back." Then return to Barth's point.

The Insect Trust did not make fusion music. They encompassed blues and old-timey and what was called folk-rock and plenty of jazz and, quiet as it's kept, bubblegum, too. But except for the bubblegum, submerged in the unobtrusive competence that underpins The Insect Trust and the quickened tune sense that sparks Hoboken Saturday Night, the ingredients didn't fuse into mush. They coexisted, strikingly in many of the best cases but always easily and naturally. This was pluralistic tolerance in action, at once traditionalist, futuristic and entranced with the here-and-now. It was something else too--bohemian. Why else begin with a 35-second opening snatch composed by blind Manhattan street musician Louis "Moondog" Hardin, for decades a fixture in his Viking or Native American leathers at Sixth Avenue and 54th Street? "Be a hobo and go with me/From Hoboken to the sea," quaver Faust and Barth over Palmer's recorder obligato and somebody's bongos. Then Jeffries belts, drawls, swallows and surrounds the title credo about having fun because there's nothing better to do. The groove is solid if not quite in the pocket, with mild mayhem all around including more recorder.

By the time her three minutes are up, Jeffreys is talking gibberish or speaking in tongues, only to right herself on the lovely lope of "Eyes of a New York Woman"--Bushnell-sounding bass line that never stumbles, harmonizing horns, wearily wistful recorder solo, literary lyric lifted from Thomas Pynchon's V. As a traveling man promises escape on the Barth-Jeffries "Ragtime Millionaire," the horns say hello New Orleans-style, with Palmer picking up his clarinet and Folwell and/or kibitzing beatnik buddy Warren Gardner tootling trumpet. But the horns don't fully assert themselves till Koehler's "Somedays." An infectious Diddleybeat drives a garbled lyric that kind of begins "I can't ask why who knows when/Because it is and then again" and may or may not wonder whether "we're crazy." But it's the unison reeds that define the track's freneticism. Which--more yin and yang--is immediately corrected by William and Arloha Folwell's pastoral love song "Our Sister the Sun," where Jones's bish-bashing waltz time and bassist Folwell's spirit quest gently tether a clarinet-dominated outro that carries the tune past seven minutes on an album where only one other track exceeds 3:23. In 1970, that seemed a suitable farewell to side one, but on CD it leads to another gear switch: Faust's "Reciprocity," the catchiest, liveliest, silliest and nicest song on the record: "Woke up with this tune in my head/It said, 'You're dead.'" Faust disagrees, with horns and a second-line march to back him up.

The middle of the second side is where vinyl albums used to let up, and there is one dip, Jeffries' breathy rendition of a pretty Koehler tune that doesn't justify the grand title "Reincarnations." But before then, she has her proudest moment, the preemptively feminist/womanist "Trip on Me," where she unlooses her assertive voice, a loud mix of booze, smoke, brass and Middle Eastern scales, on lines like "Understand you're just another man/Everything you touch you don't have to own." "I've done all I can, I'm only human, I'm me," she abruptly concludes--only then once again there's a switch. Sprightly banjo-and-recorder that recalls Othar Turner's panpipe blues leads into Jeffries's sweet voice, the murmured lyric something about a train that ends with a reassuring, "Hold me tight, Daddy, everything is OK/I'll stay"--which segues immediately on the same track, into a Faust folk song about the assassination of James Garfield. Then the dip, and then, incredibly, the peak: a fully orchestrated version of a ditty about a play date involving spaceships written and initially sung by Koehler's six-ish son Glade. Banjo, hand drums, grownup duet, crazy unison horn section and Elvin Jones all work and play well with others to climax this joyously eccentric and intensely humanistic album. Yes, the literal ending is nearly six minutes of Koehler and Gardner's wonderful instrumental-plus-scat "Ducks." But it's a coda--a prequel to a sequel, a glimpse of a next that never came.

Anyone who wonders what the hippie '60s were like--or could be like, with the arrant nonsense and obsessive back-biting avoided or suppressed--can find out from this true collective. Not the Beatles or the Stones--they were different, bigger and often better, mass culture. Hoboken Saturday Night--like Have Moicy!, the later and smaller and more pastoral and perfect album Peter Stampfel helped actualize, and maybe the Dead's Aoxomoxoa or even Dylan's Basement Tapes--is subcultural. All involve folkies untouched by self-righteous sentimentality. Three of the Insect Trust are not gone. Koehler--responsible for Moondog and Jones and "Glade Song," all decisive touches--committed suicide in 1976, a genius misfit to his unnecessary end. Palmer died of liver failure in 1997, a former New York Times staffer who left behind two important books (Deep Blues and Rock & Roll: An Unruly History) and much uncollected journalism and scholarship. Barth was painting in Amsterdam when a heart attack got him in 2000. Faust still lives in Hoboken, where he co-directs the Monroe Street Movement Space and teaches tai chi. "Surprised that in later life I was able to function," Jeffries became an a&r luminary, signing the likes of Suzanne Vega and Ziggy Marley before she lost her Elektra vice-presidency in 2000. Understandably, she's feeling disaffected. She thinks bands aren't in it for the music anymore. She's wrong--there are many more such now than in the '60s. But if any of them have a Hoboken Saturday Night in them, I wish they'd tell me about it.