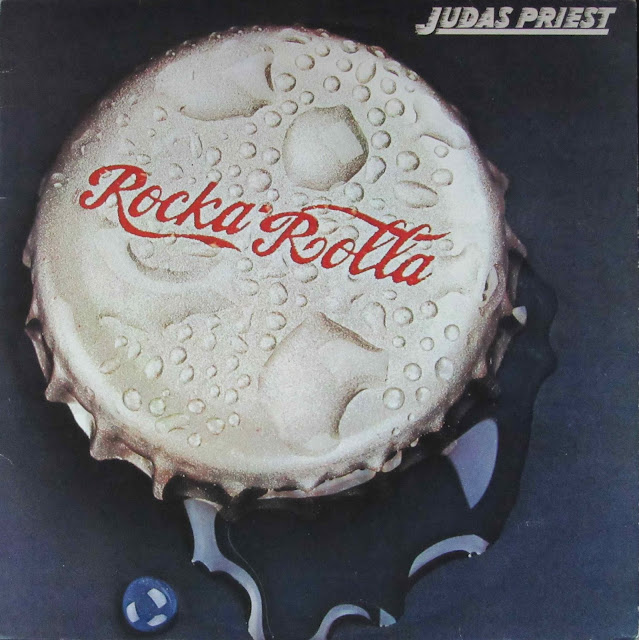 "Rocka Rolla" is the debut album by Judas Priest, released in 1974. It was produced by Rodger Bain, who had made a name for himself as the producer of Black Sabbath's first three albums. This album was played entirely "live" (i.e. all musicians playing simultaneously as in a concert, vs. the more popular method of each musician's parts being recorded separately and then mixing them). According to the band there were technical problems in the studio, resulting in poor sound quality and a hiss through the album. The band further claims that the producer had too much control over track selection, and omitted their more popular stage classics. These songs were eventually included on their next album. Many of the songs were written before Rob Halford joined the band. The track "Caviar and Meths" was originally a 14-minute epic penned by Halford's predecessor, Al Atkins, but due to time constraints, only the intro is recorded for the album. A longer version of the song appears on original vocalist Al Atkins's 1998 album "Victim of Changes". Though not the full-length version, it is notably longer at seven minutes. The album also contains covers of the songs "Winter" and "Never Satisfied".

At this point of the band's career, they had not yet developed their signature look of leather and studs. They had appeared on a British television programme called The Old Grey Whistle Test in 1975, performing "Rocka Rolla" and "Dreamer Deceiver", and their wardrobe was very hippified as journalist Malcolm Dome put it. This footage was included on the "Electric Eye" DVD. In addition, the album has some slight progressive rock influences that would continue through to Stained Class, but to a lesser extent, and would be abandoned in later releases. Drummer John Hinch would be dismissed in 1975, before the next record was to begin being recorded, for what Glenn Tipton would later call him being musically inadequate. Let us put our brains together and guess the potential repercussions of the Beatles releasing their first LP not in 1963, but, say, around 1959 or so. Well, no repercussions, actually. But most probably every critical guide to the Beatles would be starting with a one-star review and acid lines like "this is certainly not the Beatles the way the world later learned to respect and love them" and be laced with predictable tags of having yet to show their potential, copycats lacking self-assurance, far removed from the revolutionary inventiveness of the future, and the inevitable (in unpublished form) fucking sucks. Oh yes, the greatest cliche of them all: a historical curio.

This imaginary approach has in reality been applied to everybody from David Bowie to Tori Amos, but there are few bands to whom it could be applied better than Frankie Lee, er, I mean, John Wesley Harding, that is to say, Judas Priest. Some sources claim that the band actually invented the dual rhythm guitar attack on "Rocka Rolla". Could be, but who the heck would care ? The thing that matters is that "Rocka Rolla" is simply generic mid-Seventies hard-rock, with occasional lame claims for artsiness, occasionally annoying levels of dumbness, and a few fun tunes scattered here and there whenever the band isn't too busy wallowing in dated guitar effects or pointless instrumental jamming. The sour news is it took the band about five years to rise on its feet, assemble a steady lineup, get a tink-tink in the songwriting department, and release an album - this ? Little more than the humble sum of its influences, which are many indeed, ranging from Led Zeppelin and Deep Purple (hats off) to Uriah Heep and the newly-emerging Bad Company (hats back on). They even hired Black Sabbath's original producer, Rodger Bain, to give 'em the edge. But "sum" this is indeed: the band's biggest flaw is a complete lack of direction, which is, I must say, pretty disturbing when coming from a bunch of gritty axemen. One minute they're doing this brawny barroom stuff, then they suddenly launch into epic suites, then it's basic rock'n'roll and then a heavy rock mantra with signs of trippiness. I like my hard rock focused; when it's running all over the place, it's simply in no position to perform its main, vital, visceral function - namely, kick serious booty.

If they were actually to reduce the record to a 5-song EP I might have been wooed (then again, you'd never know because I don't review EPs unless they're turned into full CDs with massive amounts of bonus tracks - and what would be the use of that ?). These five rockers aren't exactly crown jewels, but this is where you feel that yes, this is a band with quite a bit of playing expertise behind its belt. Loud, ugly, clumsy (in the good sense), and the guitar tones range from standard mid-Seventies to kinda freakish. What's that they be doing on the title track, for instance? Running the sound through a 220V outlet or something? And I actually heard they'd recorded all of this live? Nice going. The one thing that sticks in my head the hardest is the looped riff to "Never Satisfied". Yes I'm ashamed. There's little else of interest to this song except for solos, echoes, and words, some of which are tied together to form virtual verbal Stonehenges like "love is gone, along with fun, now we're reaching for the gun". But the riff, whoo. Downing must have been heavy on Hawkwind fandom. Slow, draggy, druggy and it goes on for a period of time just enough for you to mash your occiput into a bloody pulp on the nearest wall. They never really tried it again because most of their fans would probably go mental and then where would Halford be picking up romantic pardners ?

Speaking of Halford, I'm not at all satisfied with his performance on this album. (Not that I care - not that he cares - not that anybody cares, but then Mick Jagger still hasn't found satisfaction either and everybody cares about him, so evidently these two things are not interdependent). On the operatic numbers, he sings opera, and that's awful; on the rock'n'roll numbers, he sings rock'n'roll, and that's generic. He simply hadn't found the famous "hiccupy" vocal style yet and mostly sounds like a more tightly wound up version of Paul Rogers, you know, like a Paul Rogers that suddenly lost interest in the female part of his audience (gee, I wonder why could that be ?) and simultaneously dropped all the silkiness and softness from his cords. At the very least, though, he doesn't directly ape any of his betters (Gillan, Plant, Byron, etc.), so we'll drop the case. Back to the songs - "One For The Road" and the title track can come in handy along with a Budweiser six-pack after a hard day's work at Burger King (boy, do I ever suck at elitist jabs), but, again, will hardly be of any use to classic Priest fans. The title track "Rocka Rolla", in fact, is about woman love, which is just plain wrong. It's like George Harrison singing Motorhead's "Don't Need Religion". And it's also got this weird minimalistic guitar solo which is just two or three notes repeated over and over, not because that's all Tipton could play at the time, but because they probably wanted to hit the pop charts with it or something. In the end it all looks so silly that I don't even have the strength to be offended.

The only song that remotely sounds like typical mid-Seventies Priest is "Cheater" (and the resemblance is already well visible in the title; Judas Priest are known for their little weakness towards the nominal suffix "-er" just as Dylan is known for his passion for the adverbial suffix "-ly"). And from what I can tell, it wasn't even on the original album, although it is included on my CD. It's got the twin guitar attack and a far more aggressive, viciously attuned vocal delivery - but it's still much too bluesy to be in the correct ballpark. And then the real fun begins. An 8 1/2 minute song, for instance, appropriately titled "Run Of The Mill". Don't tell anybody, but I actually think that some of the endless soloing on that track is kinda neat. It isn't just bluesy guitar heroics, it's atmospheric and minimalistic, and sometimes there are two guitar parts, quietly musing and conducting their quiet little countermelodies against each other, nonchalantly unaware that in a few minutes the fun will be ending and you'll have to listen to long winding vibratos out of Halford's throat when you could have been enjoying a first-rate La Scala performance instead. Then I come back to my senses and realise that, oh sweet Jesus, I used to scoff at motherfuckin' Led Zeppelin for doing those things, and now I'm praising Judas Priest for them ? What the heck is my problem ? Might as well be praising them for the completely non-descript folk-rock (sic!) instrumental "Caviar And Meths" that closes the album. (Rumours say that it was originally much longer but the nasty producer had them cut it down, maybe because it was lulling him to sleep, in which case I do empathise).

First prize for ridiculousness, though, unquestionably goes to the "Winter" suite. Okay, please don't laugh: Judas Priest actually wrote a mini-symphony about a harsh, cold winter and how it ended and the birds began singing again. I said don't laugh - put yourself in these guys' shoes in mid-'74 and God only knows what you'd have to be writing mini-symphonies about. Even Frank Zappa was writing about winter. (Okay, so he was writing about Eskimos eating the yellow snow, to be precise, but that was just his take on the subject). The thing is, that gives them a good excuse for some guitar hooliganry and a sissie ballad chunk as an added bonus. Yes, of course it's horrible, but at least it's curiously horrible. As is the album in general, I guess. No wonder it took them a whole two years to follow it up with something - so that the world could forget all about it and critics wouldn't be bringing it up with every next review. Wise move. Well, supposedly the law people in Coca Cola had their own reasons when they complained about the album cover - who'd want their brand's name associated with such a Quasimodo of an album ? Although, on the other hand, the cover is unquestionably the most stylish thing about it. Makes me thirsty just to look at it.

The album "Rocka Rolla" was reissued in 1987 with a different cover. Reportedly the band was unhappy with the original cover art and logo, as it didn't fit with their image as a heavy metal band. There are also rumours that the Coca Cola Company brought legal pressure because the original album art too closely resembled their most famous brand. The re-issue cover art (By artist Mel Grant, and originally used as the cover for the novel The Steel Tsar) was also used for the US cover of Ballistix for the Turbo Grafx 16 and Commodore Amiga. Since the album was released during the period when K.K. Downing was the band's frontman, this remains the only album on which he is the primary songwriter. Judas Priest have rarely performed any of the songs from Rocka Rolla live since the mid-late 1970's. However, "Never Satisfied" was brought back into the band's setlist for the 2011 Epitaph tour.