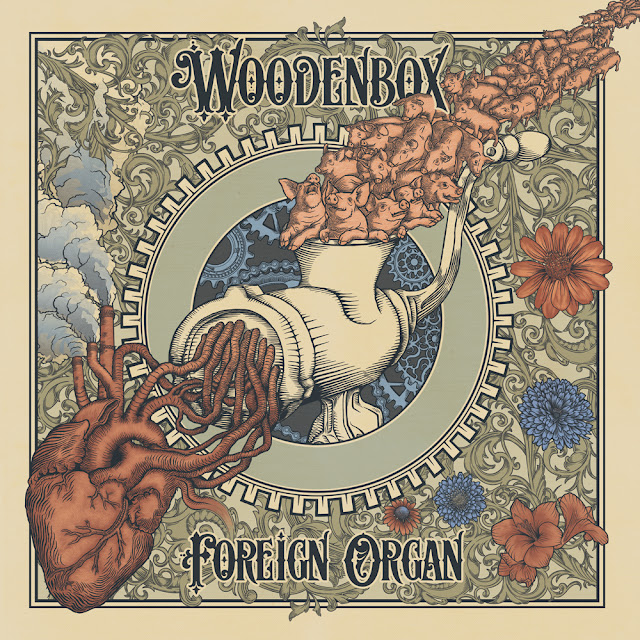 When Woodenbox entered Chem 19 recording studio in Blantyre back in August 2011, the Glasgow based sextet were fuelled by the sound of the Sensational Alex Harvey Band and Kayne West. They set about recording "End Game". Four years later, it was a much more subdued Woodenbox that began recording their latest album "Foreign Organ", which was released on Olive Grove Records. The reason for the change in Woodenbox’s mood, was they, like forty-five percent of Scotland, had the post referendum blues. 18th September 2014 could’ve, and should’ve, been the most important date in Scotland’s history. It should’ve been the day that Scotland became an independent country. Sadly, the fickle, feeble and greedy had their way. Proud and progressive Scots, like Woodenbox and myself were robbed of the chance to be part of an independent country. So, it was no wonder that we had the blues. Despite having the post-referendum blues, it was time for Woodenbox to begin work on the followup to "End Game". This time, Woodenbox weren’t making the pilgrimage to Chem 19. No. Now they had their own studio. This was a game-changer

At their newly built studios, the six members of Woodenbox got to work. Vocalist Ali Downer played acoustic guitar and piano. He was joined by a rhythm section of drummer Nick Dudman, guitarist Jordan Croan and bassist and organist Fraser Mckirdy. They were joined by the horn section of trumpeter Phil Caldwell and saxophonist Sam Evans. This time, when Woodenbox entered the studio, they were free of time constraints. At last, they had built their own studio. Over a five year period, the members of Woodenbox had transformed their rehearsal rooms into a studio. This was no mean feat. Building a recording studio is a perilous project, one that can go drastically wrong. Thankfully, that wasn’t the case with Woodenbox’s Glasgow studio. Woodenbox managed to create a state-of-the art recording studio. This allowed Woodenbox to begin work on what became "Foreign Organ". In the wake of the Referendum, recording of "Foreign Organ" began. Although Woodenbox had the post Referendum blues, they approached the sessions with a renewed sense of purpose. It helped that Scotland was changing. Scotland’s governing party, the S.N.P. had a new leader, Nicola Sturgeon. The baton had passed from one political generation to another. It was a masterstroke. Straight sway, Nicola Sturgeon imbued a spirit of positivity within the nation. This rubbed off on Woodenbox.

Woodenbox approached the recording of "Foreign Organ" in a different way. They decided to reevaluate how their songs took shape. For the next few months, Woodenbox found their own voice, and began to hone then ten songs that became Foreign Organ. Now that Woodenbox had their own studio, there was no need to rush. So they took time writing and recording the ten tracks. Some song came with a message; others offered words of advice; while others painted a picture of Scotland circa 2015. "Foreign Organ" was an articulate, accomplished and cerebral album from Woodenbox. It’s fitting that Woodenbox chose to release "Foreign Organ" on 8th June 2015. The General Election had come and gone. Scotland had been transformed. Fifty-six out of fifty-nine seats were one by the S.N.P. It was changed days from the morning of 19th September 2014. Back then, much of Scotland was in mourning. Not now. It was a joyous time. There was hope for the future. What better time for a group that represented the new Scotland to release their third album. When critics heard "Foreign Organ", they liked what they heard. The reviews called "Foreign Organ" Woodenbox best, and most accomplished album. They had come a long way in seven years.

During 2011, Woodenbox played some of Scotland’s biggest music festivals. T In The Park, The Wickerman Festival, Celtic Connections, Belladrum, Insider and The Hebridean Celtic Festival. When Woodenbox weren’t appearing at festivals, they played at venues across Scotland and England. Woodenbox also supported Gomez and The Alabama 3. Somehow, Woodenbox found time to record their sophomore album "End Game". With recording beginning in August 2011, this meant Woodenbox would have a single released to coincide with their first American tour. "Everyone Has A Price" was released in March 2012. After touring America, Woodenbox returned to the Britain and embarked upon a tour. After that tour was finished, "End Game" was completed in October 2012. Five months later, the ten-track "End Game" was released to critical acclaim on Olive Grove Records in March 2013. Since then, Woodenbox have played numerous live shows, completed building their own studio and recorded a new album "Foreign Organ", which should introduce Woodenbox’s music to a much wider audience. You’ll soon realise why.

"Foreign Organ" opens with "Somewhere New". It features a philosophical Woodenbox. They wonder if utopia is the place where you live, and what would happen if the buildings were no longer there ? Who and what would be left ? It’s a fascinating thought. Especially when pondered against a backdrop of flourishes of piano, flute and ethereal harmonies. A lone trumpet sounds. It adds to the wistful, dreamy nature of this cinematic tracks. Jangling, Glasgow School guitars accompany Ali Downer’s hopeful vocal on "Life Decays". Straight away, you’re hooked. It’s obvious something special is unfolding. Woodenbox’s rhythm section, searing guitars and cooing harmonies unite with a rasping horns. Meanwhile, Ali warns against spending your life always wanting more. As he does, a joyous, stomping, hands in the air anthem unfolds. On "More Than A Friend", Alex Kenzel and Cat Calton from Skinny Dipper join Woodenbox. It’s like a who’s who of Olive Grove Records. All we need is Henry and Fleetwood. From, the get-go, a scorching guitar cuts across the arrangement as the rhythm section provide the arrangement’s heartbeat. Ali delivers a needy, rasping Tom Waits’ inspired vocal. He’s caught between friendship and love. He wants his friend to become his girlfriend. She’s not so sure, and doesn’t want to potentially, loose a friend. It’s like a short story played out over four melodic, and hook laden minutes. Woodenbox, aided and abetted by Alex Kenzel and Cat Calton take you on a roller coaster journey of emotions where Woodenbox and Co., showcase their considerable skills.

Amidst a wall of feedback and then searing, scorching guitar Roberto takes shape. All the time, drums pound and a pulsating bass bounds across the arrangement. It’s joined by a  rasping horn. It weaves in and out of the arrangement. Meanwhile, Ali delivers a vocal that literally bristles with emotion, as he sings about the worries of financial problems. In this case, it’s a broken relationship. A despairing Ali sings: “why did you have to go away.” He literally lives the lyrics, and his despair becomes real when he sings: “I only ever feel alive when I don’t care…why did you have to go away ?” The way Ali delivers the lyrics, it’s as if they’re personal. Proving the perfect foil for his vocal are Big Country styled guitars. They ensure  Woodenbox combine power, emotion, hooks and a social conscience. The spartan introduction to "A9 North", briefly reminds me of Paul Buchanan’s Mid Air. Just a lone tack piano sets the scene for Ali’s vocal. He’s later joined by harmonies. That’s all that’s needed. They frame his vocal, as he remembers the journeys he’s taken up the "A9 North" with his partner, and the plans they made. It’s as if they’ve been reinvigorated by the journey somewhere new. Sadly, when they return home, their plans are forgotten, until the next journey up the "A9 North". "Directions And My Boy" is a message from father to son. Don’t ever waste your time in a job you don’t like; and don’t let money get in the way of your dream. Against, just an understated introduction, Ali delivers a heartfelt vocal. It grows in power. So does the arrangement. A thunderous, stabbing rhythm section, piano and blistering guitars accompany Ali’s impassioned powerhouse. He seems to have been inspired by Glasgow’s one and only Alex Harvey. So it seems, have the rest of Woodenbox, when later, they add singalong, chanted harmonies. Along with the horn section, they take this empowering anthem to its glorious crescendo.

"Face Able" sees Woodenbox breakout their guitars, as Ali delivers a strutting vocal. He sounds not unlike Phil Lynott of Thin Lizzy, as he decries the social networking, and those addicted to it. His message seems to be get out there, and meet people, like we used to do. Behind them, the rest of Woodenbox cut a rocky swathes across the arrangement. The rhythm section pound, horns soar and guitars scream, as Woodenbox pay homage to the Gods of rock, and Ali becomes The Rocker. "Carbon Mold" sees Woodenbox drop the tempo, on what’s an intriguing track. Ali sings the song to  Woodenbox as he existed as a man. He’s accompanied by lush strings, chiming, jangling guitars and a vortex of melancholy horns. Together, they play their part in a quite beautiful, cerebral song. "Rust" is about the ability to be confident without always having to back down. Punchy horns lock horns with the keyboards and rhythm section. They set the scene for Ali’s despairing vocal. He hasn’t the confidence to do what he wants. Against a backdrop of lushest cascading strings, harmonies, braying horns and blistering guitars, lays bare his soul and shortcomings. It’s like a cathartic outpouring of emotion. When Ali’s vocal drops out, Woodenbox cut loose and jam. This allows you to hear how far they’ve progressed as a band. They’re up there with Scotland’s top bands. "Scotland", which closes "Foreign Organ", was written in the wake of the referendum. Ethereal harmonies are joined by a piano. It accompanies Ali’s wistful, rueful vocal. In the first line, Ali sums up the 55% who voted against independence: "give him a choice and he’ll probably say things aren’t meant to change". From there, Ali ponders Scotland’s past and future, against a backdrop of piano and harmonies. As the song closes, the sound of a baby can be heard. There’s an irony to this. It only brings home the selfishness of him in the song. His apathy affected the future of generations of Scots.

"Foreign Organ" is without doubt, the best album of Woodenbox’s career. Woodenbox came on leaps and bounds on End Game. It was released to critical acclaim in 2013. However, "Foreign Organ" is a game-changer. "Foreign Organ" should see Woodenbox become one of Scotland’s most successful musical exports. It showcases different sides of Woodenbox’s music. For much of "Foreign Organ", Woodenbox unleash hook-laden, joyous, feel-good music. Anthems aren’t in short supply. These are bound to win friends and influence festival goers during the summer months. Then on other tracks, the music is beautiful, cerebral, dramatic, edgy, ethereal,  melancholy and melodic. Ali Downer breathes life, meaning and emotion into the lyrics. That’s the case whether Woodenbox are in a reflective mood, or unleashing a hands in the air anthem. It seems Ali, and the rest of Woodenbox have grown and matured as a band since they recorded "End Game" in 2011. They’re a much more assured band. That’s apparent throughout "Foreign Organ". It’s the album that could, and should, introduce Woodenbox to a much wider audience. There should be no stopping Woodenbox. Woodenbox are now one of Scotland’s top bands. Surely Woodenbox are about win new friends and influence people, with their album "Foreign Organ", which showcases their unique brand of hook laden, anthemic music ?