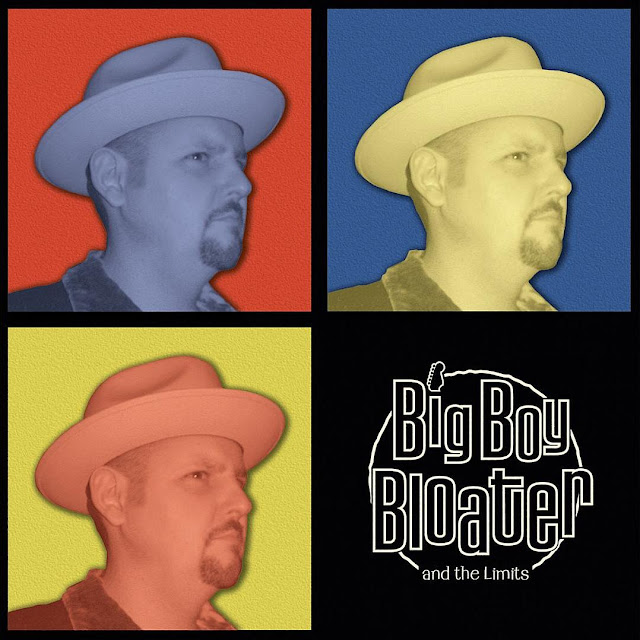 Opening "Big Boy Bloater and The Limits" is "Ugly Way of Thinking", a track Big Boy Bloater wrote. It’s a great track to opens the album, allowing the listener to hear what was described to me as the Big Boy Bloater experience. It allows you to hear both Big Boy Bloaters’ husky, throaty vocal and his searing, sizzling blues guitar playing. He’s accompanied by a multitalented band, that compliment his vocal and guitar playing. From the rhythm section, to the piano that drifts in and out the track and Snowboy sprinkling percussion, The Limits prove worthy and complimentary accompanists. Together with Big Boy Bloater, they get the album of to a storming start, that has you wanting to hear much more of their music. On "I Heard Those Voices Again", Big Boy Bloater and The Limits raise the stakes. Big Bloater’s growling, frustrated vocal is accompanied by the rhythm section jangling, twanging guitars, and a Hammond organ adds to the track’s atmosphere. They provide a dramatic backdrop that reflects the energy and anger in his voice. During the track, The Limits almost pause, adding to the drama, before jangling guitars, and Big Boy Bloaters vocal reenter. Taken together, the result is a track that’s not just full of darkness, drama and energy, but one that compelling and intriguing. "Fumble Fisted Fool" is the third of ten songs Big Boy Bloater wrote, and is one with a gloriously, authentic bluesy sound. His vocal is gentler, with crystalline, soaring, screaming guitars answering his call. Behind him, The Limits give one of their best performances. Pianist Matt Empson’s contribution can’t be underestimated, his blues drenched piano key to the track’s sound and success. Along with a rhythm section that drives the track along and some stunning guitar licks from Big Boy Bloater, this is quite simply a stunning track, easily one of the album’s real highlights.

"Sweet and Brown" is quite unlike the previous tracks on "Big Boy Bloater and The Limits". It fuses rockabilly with some gospel tinged backing vocals. However, when the track opens you’ve no idea of the treat that’s in store. Gradually, the track reveals its secrets and charms. Big Boy Bloaters gruff, husky vocal is answered by those testifying backing vocalists and handclaps. Meanwhile, the piano, standup bass and bursts of Hammond organ provide a backdrop that quite simply swings and sweeps you along in its wake. Quite simply, It’s impossible to resist this track’s charms, which is made all the better by the backing vocalists who include Imelda May. The only track on "Big Boy Bloater and The Limits" that Big Boy Bloater didn’t write is "My Prayer". Again it’s a quite different sounding track, one with a reggae influence. Stabs of Hammond organ, standup bass and drums create chugging beat, that accompanies Big Boy Bloater’s thoughtful, emotive vocal. Amidst the chugging beat, the standup bass and bursts of Hammond organ stand out, before trombonist John Brooks solo adds just the finishing touch to a track that demonstrates a quite different, but quite beautiful sound of "Big Boy Bloater and The Limits".

Straight from the opening bars of "She’s Just A Friend" you realize that you’re about to hear something special from Big Boy Bloater and The Limits. They certainly don’t disappoint. Big Boy Bloater vocal is husky, heartfelt and full of admiration and maybe, longing. Behind him, pianist Matt Empson is at the heart of the track’s success, while the rhythm section drummer Dean Beresford and bassist Al Gare provide the track’s heartbeat. Later, Big Boy Bloater demonstrates just how talented a guitarist he is, laying down a spellbinding solo, that shows just why he’s in such demand as a session player. However, not only is he a hugely talented guitarist, but a vocalist who brings a song to life, injecting emotion and meaning, like he does peerlessly here. "Rocket Surgery" is an apt title for a track that literally explodes into life. This is an instrumental, where the band get a chance to kick loose and play some stunning blues music. At the heart of the action is Big Boy Bloater’s guitar playing. His fingers fly up and down the fretboard, never once missing a beat The rest of the band enjoy the chance to kick loose. Matt Empson on Hammond organ adds an atmospheric, howling solo, before. later, drums and guitars that wouldn’t be out of place on an old surf track briefly enter. For just over two and a half minutes you’re totally spellbound, enthralled by this scintillating slice of blues music.

As "Get Over That Its Over" begins with Big Boy Bloater weaving his guitar, he’s followed by the rhythm section, percussion and Hammond organ. After a lengthy introduction, his angry, throaty vocal enters, while guitars reverberate and a pounding bass line accompanies it. Snowboy sprinkles percussion throughout an arrangement that’s atmospheric and haunting, like something out a David Lynch film. The occasional introduction of surf guitars, drenched in reverb adds to the atmosphere, as does Big Boy Bloater’s gruff, dismissive vocal. "Rushing To Waste Time" sees Big Boy Bloater and The Limits drop the tempo way down. When Big Boy Bloater’s emotive, heartfelt and sad vocal enters, it reminds me of Alan Price and even, Chris Farlowe. Behind him, the arrangement is spacious and dramatic, with slow drums punctuating the arrangement, while the piano and guitar fills some of the spaces. They provide the perfect accompaniment to the vocal, resulting in a heartfelt track, full of sadness, loneliness and regret. The track that first introduced me to Big Boy Bloater and The Limits was "Big Fat Trap", a track from "Snowboy Presents New Vintage Volume 1". Not only is it one of the best tracks on the compilation, but one of the highlights of Big Boy Bloater and The Limits. This was a single released in 2011 on the Acid Jazz label. It’s a joyous, uplifting track, where bursts of punchy horns, a myriad of percussion, handclaps and driving rhythm section combine. They bring the track to life, injecting energy and passion. Magnus’ vocal is full of emotion, impassioned and powerful. A Hammond organ drifts in and out of the track, adding an atmospheric and melancholy sound. Meanwhile, horns blaze and frenzied percussion help create four minutes of joyful, infectious and irresistible music.