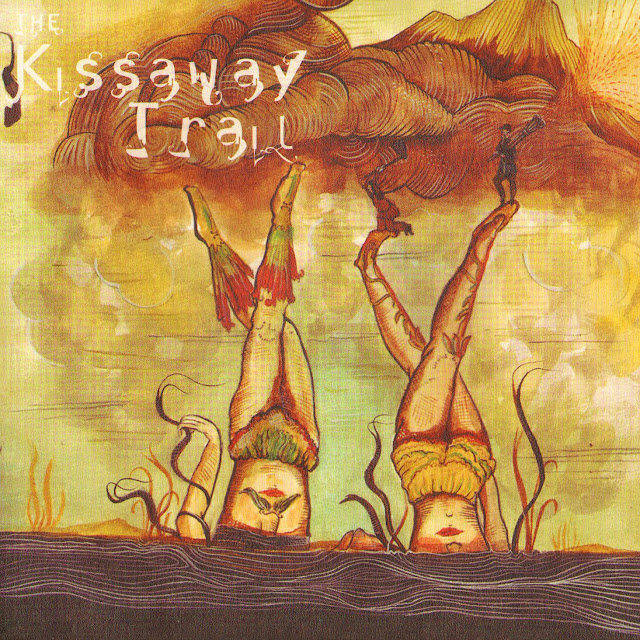 The four members of Kissaway Trail (Søren, Thomas, Hasse and Rune) originally recorded together under the name Isles, and did a self-released album called "We Have Decided Not To Die" in 2005. Since then, an additional guitarist, Daniel, while Thomas started to sing alongside Søren making the distinctive two lead-vocal sound that they have today. Various tracks from this early period of the band's history can still be downloaded from Danish music websites. The band’s musical existence very nearly ended when Søren lost his love for music after his father was killed under tragic circumstances. However, he made his own decision to start performing and recording again, and Kissaway Trail started to create their debut album. Their material is released in Europe (aside from Scandinavia) and Japan by Bella Union, Etch'n'Sketch in Australia and New Zealand, and Playground Music in Scandinavia. On their breakthrough album local producer Niels Høg helped them in the studio. The title of their song 61 relates to the number of days a band member had to wait to hear if their family member had a terminal illness. The member involved is kept under wraps for very personal reasons; some fans believe it is Hasse, the drummer, because he has a tattoo of the number 61 on his chest. In the Autumn of 2007, Kissaway Trail acted as the main support for Editors on their UK and European tours, alongside Ra Ra Riot in the UK and The Boxer Rebellion in Europe.

The band have cited influences to their music include The Beach Boys, Grandaddy, Daniel Johnston, Placebo and Sonic Youth, amongst others. Their sound has also been compared to that of the Polyphonic Spree and Canadian band Arcade Fire. The band have been known for their live performances, which have included songs from "The Kissaway Trail", as well as b-sides such as "Romeo And Romeo" and "La Mia". They have also performed at the Wireless, Latitude and SXSW festivals in 2007, and the Montreaux Jazz Festival in 2008, where they supported Interpol and The National, and Lollapalooza in 2010. Although Danish five-piece The Kissaway Trail have proven themselves to be a massively accomplished live act - recent turns at various venues across London have been witnessed by DiS, and they’ve seemed better each time - their self-titled debut album doesn’t quite capture the engrossing ferocity and touching intricacies of their on-stage splendour.

It’s not bad at all, but anyone whose witnessed the band live prior to listening to its eleven tracks will, most probably, feel a little short-changed. Opening in hair-prickling fashion with "Forever Turned Out To Be Too Long", the record sets its overall, overriding tone early: this is music designed to be epic turned down ever so slightly and re-geared for utmost intimacy. It’s music to be thought through and soaked in, music to fall in and out of love with a dozen could-be partners to, music to soundtrack the passing of ships in the night. Lead single "Smother + Evil = Hurt" is an exercise in perfect heartstring plucking. it squeezes your insides and makes you ache to be held, but it’s only half as powerful on this LP as it is when executed before your eyes as well as your ears.

The sole flaw of this record, then, is one of its creators’ own making: they’ve established such a fine reputation for themselves in the live arena, their set at The Camden Crawl being a particular highlight of late, that their studio work can only exist in their on-the-road shadow. It’s full of finely tuned, stomach-stirring indie-rock vaguely a la Arcade Fire if they’d bypassed widespread recognition for a career on the Deep Elm label, or The Appleseed Cast before they shuttled too far from Earth’s orbit, but few songs truly stand out; it’s a record of a generally consistent quality rather than a tumultous series of peaks and relative troughs.

"Sometimes I’m Always Black" is a cut above the rest, though, propulsive drums guide a gradually building, steadily soaring song to a climax that could, conceivably, have ended the album. Live, it’s way beyond a mere corker,  it’s the set’s shining centrepiece. Here, at track eight of eleven, it feels underused. Actual closer "Bleeding Hearts", pretty though it most certainly is, is a parting shot that really doesn’t do The Kissaway Trail justice,  it’s so wet a dozen white towels from backstage couldn’t dry it out. "Soul Assasins", meanwhile, is the only skip this now offering: it simply should not have made the final sequencing. "The Kissaway Trail" is something of a frustrating listen, then - it’s a very good debut, a very good debut, but one that’s lacking in the bombast department; it’s a rather flat representation of a band that, live, can truly steal the breath away from all attendees before them. As a foundation for an absolutely stunning sophomore, though, this is good enough for sure.