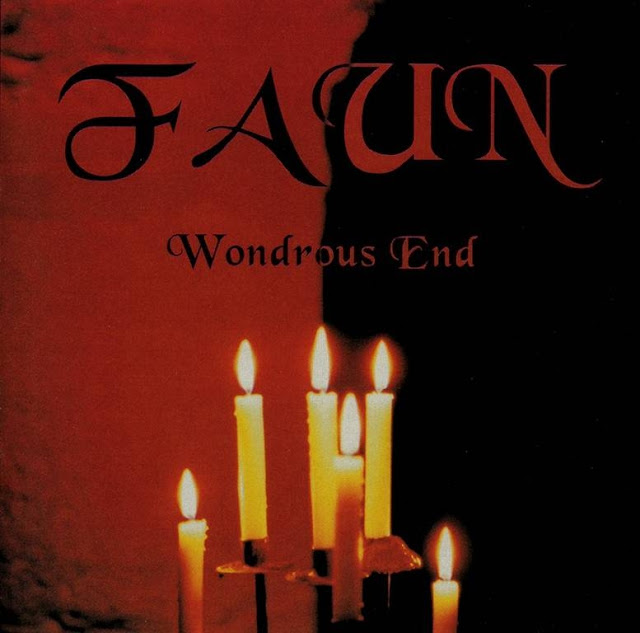 Just what is a Faun, you may ask. That would be the flute-playing mythical creature who is half goat and half human. That is fantasy, the reality is Faun are a German neo prog band born in 1992 comprising of Christoph Roth (vocals, keyboards and percussions), Steffen Schuerkens (drums, vocals and guitar) and Helmut Weinlaender (bass and guitars) in Würzburg. In 1993 they added Marko Brenziger (guitars and keyboards) and Evelyn Ott (flute and keyboards) to round out the band. Making their mark in small clubs and festivals, the band experienced their first real taste of the big time with an appearance at famous Würzburger Kulturjahrmarkt (KuJa), a three day music and theater event. About a year later, Ulrich Miksa (sound, live-mix, arrangement, keyboards) joined and was in charge of the live sound for the band.

At the tail end of 1994 into 1995, Faun went into the recording studio for the first time to lay down a few tracks for their debut. Due to musical differences, only a few of the recorded tracks were finished. Faun experienced a personnel change in 1995 with the departure of Evelyn Ott. She was replaced by Brigitte Groll (flutes and keyboards) six months later. Brigitte's first big appearance with Faun was shortly after she joined the band at the "Umsonst & Draussen" Festival in Würzburg. At the same time, the demo-tape "Remembrance" (still with Evelyn Ott) was published. Five of the seven tracks were from a live gig, the rest of them were recorded in the studio. Many appearances at open air concerts and a progressive rock festival followed.

In January of 1997 at a concert with the Japanese instrumental trio "Ars Nova", Faun received praise by national press for the first time and were able to present themselves to a broader audience. After an appearance at a progressive rock festival of the Pink Floyd & Art rock magazine Eclipsed in Aschaffenburg, the song "The Stone" was published on the "Sysyphus" Sampler Volume 3, along with songs by famous international bands of the same genre. The next few years proved to be very turbulent for Faun as the band began to drift apart musically. Additionally, the band took more hits as members had to relocate due to their 9 to 5 jobs. In January of 1998, the official farewell concert in the arches of the Bechtolsheimer Hof in Würzburg. The band performed their complete repertoire, which was documented for the live CD "Wondrous End", making it their debut and farewell CD.

When I found this CD and heard first the first time I was quite elated. It was a double album, over two hours long, and it was mostly made of live tracks. The music was stunning and I thought they were a band with at least a few studio albums behind them. What was my surprise when I fount out through PA that Faun's "Wonderous End" was their sole release. Taking in consideration the quality of the songs, the professional recording and the impeccable performances, it was hard to believe. But there it is: this fine german group has only one CD and nothing more. The music here is hard to compare: they sound familiar in several ways, and yet they were quite unique. Most of the time they sound like a prog folk band, thansk to the several acoustic parts and very nice flutes. But there are strong symphonic, neo and ethnic parts too. Some excellent classical influenced keyboards lines and very good electric guitar solos burst frequently. In fact, their songwriting and playing is so varied and strong, it is hard to describe them. What could have been a lack of personality came across as a very eclectic, yet coherent, whole. The production is excellent and you can hear very well every nuance and detail.

Vocals are in english (with a few spoken words in german here and there) and while not very outstanding, they are still good and passionate. The CD comes with 3 studio tracks, two of them are already played on the live parts of the record and one, "Shrovetide", is a demo. There are no fillers and the quality of the tracks vary between good (a few) to excellent (most of them). It is a real shame Faun is no longer around. They were more than just promising. And this CD is proof of that. I'm glad it was someone had the good sense to release it for the prog market. The album is a real lost prog gem. And a big one. Over 145 minutes of very good music. An excellent addition to any prog music collection.