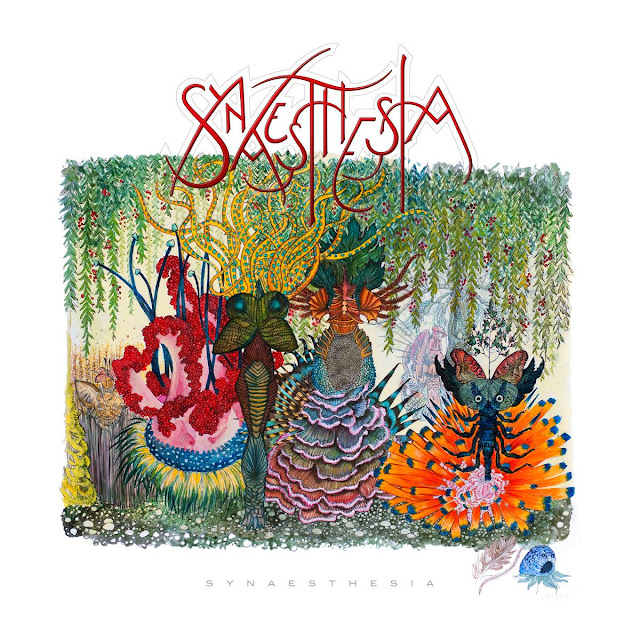 I feel, in this day and age, that print media and magazines are becoming less and less relevant to finding new music, yet somehow the team at Prog seem to find these bands that no one else does. I know there are a fair few haters of the magazine amongst my friends and followers, but I feel that Prog serves its purpose within the realm of music by serving those who do things the old-fashioned way. You know, with demo CDs and sending stuff to labels and magazines, rather than posting things on bandcamp and praying for someone to find you. I am regularly impressed by the number of artists that slip under my radar completely, only to find them enclosed in the pages of Prog magazine. As much as I feel that print is a dying media (although I prefer it), somehow Prog are keeping relevant, because they appear to have some sources that we don't have. Which brings me to this band and album, their "pick for 2014". I'll be honest, I didn't actually find these guys through Prog, but I know very many people did. It was an upset of sorts, because everyone would have expected iamthemorning or someone similar to walk away with the award, but at the same time I guess everyone was glad that it was a band they didn't know. I actually found these guys in presumably the same way that Prog found out about them, from their record label, Giant Electric Pea Ltd., who are famous for being IQ's record label since Peter Nicholls rejoined in the early '90s, and only serving a very select few other bands, namely Threshold, Spock's Beard and Big Big Train. One would assume this meant some connection to IQ from personnel or management, but I actually think that this was a simple case of members of IQ enjoying their music, and given that Synaesthesia's debut show was opening for the neo- prog greats, it has most certainly helped them.

Although I do also consider this album to be a neo-prog record, and the first 'pure' neo record I have enjoyed for the last few years, unlike many neo bands, Synaesthesia don't consistently feel the need to steal from IQ or 80's Marillion to complete their sound. Although the wall-of- synth throughout this album is incredibly neo-prog, the band also introduces a lot of modern influence into their guitar work and melodies, even citing Muse as an influence twice on their facebook page. They could be compared to other contemporary neo bands like Frost*, but the vast distances between Dec Burke and Synaesthesia vocalist Adam Warne, as well as the absence of heavy elements, mean that these two bands still sounds greatly different despite existing on the same plane. The album is flustered with the characteristic neo-prog analogue synth, but regularly, the synth pushes into the modern, arpeggiated keyboard style that Muse have become famous for. This, combined with occasionally harder edged guitars, and the fact that Warne would sound far more comfortable in front of an indie pop band, means that Synaesthesia has a nice modern touch, pulling it away from the crowd of throwback bands that only take from pre-1987 influence. One of my favourite moments on this album is the chorus of the gargantuan opening track, "Time, Tension & Intervention", which features a wonderful transition from the lush verses into a rather hard-hitting, riff-driven chorus, that could have come from a modern stadium rock album, if Warne had a more powerful voice. There are other nice touches, like "Sacrifice", although I consider it to be the weakest track here, has a great groove in the opening riff, reminding my a lot of "Celebrity Touch" by Riverside (which in turn reminded me of some groovier alt-rock bands like Red Hot Chili Peppers or Incubus).

But in the end, I really think the only thing stopping this from being a favourite album for me is the vocalist, and many other critics have had the same problem, although not for the same reasons. My problems with him don't lie in the lyrics or his ability to come up with good vocal lines; it's simply the timbre of his voice that I just can't enjoy. Neo-prog is a genre dominated by powerful voices, and although I admire Synaesthesia for taking the risk of having a vocalist who doesn't sound like Fish or Peter Nicholls (or both at the same time, like some neo bands), I really feel this music just doesn't work without someone with a phenomenal range and an even more phenomenal lung capacity. I can actually imagine these vocal lines being someone with a big voice, and the music would be raised so much higher. One person I can't help but hearing (who has a voice I equally despise) is youtube celebrity and Chameleon Circuit frontman Alex Day, especially in the annunciation and also slightly in the lyrical style. But honestly, I feel that's my only complaint about this. Some of the wall-of-synth moments get pretty cheesy, but for someone who has loved neo-prog for a long time, this is hardly a big problem or obstacle, and aside from the opener, none of the songs stick out as 'great' (they're all 'pretty decent' or 'nice'), but the instrumentals here are excellently written and performed, from the atmospheric and lush backings to the vocal led sections to the dynamic and fun instrumental jams that don't lose themselves in messy lines or instrumental wankery. We have two big instrumental sections here, the fully instrumental track "Technology Killed the Kids", running a great 5/4 groove for the majority of the track, and the thoroughly impressive jam during the 22 minute opener, running from about the 2 minute mark through to well into the eighth. Both of these sections never lose their energy, the riffs running through them are well- written, and they never really tend to get boring, like many instrumental jams.

"Time, Tension & Intervention" is a wonderful album opener and really made me blew away at first listen as I do enjoy the energy as well as the inventive keyboard work throughout the song that is considered as epic as it consumes a 22 minute duration. What amazes me is the stream of music that flows wonderfully taking the lead vocal well supported by combined performance of instruments played. The bass-playing sounds dynamic throughout the epic while the drumming is also wonderful. I do not really understand what really make me enjoyed with the music as actually it sounds just simple. In fact the solo is not as you might expect similar with Rick wakeman or guitar playing like Steve Howe. It's just so wonderful. I keep playing it many time withouth a sense of getting bored with the music. I's really a great opener. "Sacrifice" starts off with a simple drumming with nothing special in terms of the virtuosity - it's just a regular drumming and probably some of you might say something special at all - it's just a sound of drumming. But for me this short opening brings what next is a very good music stream that flows wonderfully. Yes, there are music riffs but they are not something like progressive metal at all. the guitar and keyboard work are also mixed thinly and nothing is dominating one to another. The audio production is really neat and flawless. In terms of proggyness, nothing that I can show it demonstratively to you. It's basically a simple song with upbeat tempo and wonderful groove. And I love the vocal line and the melody he brings with the song. It's really a wonderful song. The bass guitar and drumming are also excellent.

"Noumenon" starts nicely with simple Yes inventive keyboard - synthesizer work augmented with bass guitar. The music then flows nicely in relatively slower tempo than the second track. Now the guitar playing really remind me to IQ even though not as raw as IQ. But the key is actually how the keyboard plays its inventive tones along the way with great combination of guitar fills. This third track is also really great. Even though there are some segments that might remind you to IQ but I don't see any melody or bits of it coming out from IQ music at all. It's really a very nice short instrumental. "Epiphany" starts off with a musical riff combining bass, guitar, keyboard and drums. The music then goes into a bit of complex segments before it finally lands into a relax mode music that reminds me to the kind of RPWL or Floydian waves. The vocal line is really excellent especially backed up by the waving keyboard work at back ground. There are great moments during vocal line especially when it is augmented by mellotron-like sound that later brings the music into an upbeat tempo with faster speed. What a great tempo changes around this area! And the band provides you with a short complex segment for a transition to another slow tempo part. And the guitar solo is stunning, you enjoy the Floydian guitar work at the last part of the song.

"Good Riddance" sounds like a straight rocker but it's backed with a mellotron-like sound that suddenly has a break with only drumming work and followed with distanced singing style. Oh what a nice opening part this song has! the music then flows like a Floydian music with hard pounding drumming work. I like the drum sounds really. I usually play this part with high volume at amplifier because it's very satisfying. I like the ending part of this short track especially with guitar solo and singing style and tight basslines. "Technology Killed The Kids" starts with something that sounds like a computer game followed with fast tempo drum beats combined beautifully with keyboard and guitar in relatively fast and upbeat tempo with many breaks and some complexities. The song then takes guitar as lead melody with some breaks indicating the computer games. This short instrumental is really great. "Life's What You Make Of It" concludes the album nicely with an ambient opening and vocal line that flows beautifully, there is nothing to rearrange, as the vocal says at the opening part. the music then flows in crescendo with keyboard work followed with a bluesy guitar work. This might be considered the most poppy compared to previous tracks. Yes it has high points as well but the key thing is that this song sounds like summarizing what the band has presented with its previous six wonderful tracks plus this excellent concluding track.

It's a beautifully-crafted debut album that produces great composition of music in the vein of neo prog combined with modern alternative music but not so much derailed from the prog category as the essential element of the melody has proved successful in making the album cohesive as a whole. Fans of Pallas, Pendragon, Arena, IQ ora Triangle (Dutch) will enjoy very much this album. Yes, I remember Triangle "Square The Circle" has similarity in terms of sub-genre with this debut album. "Synaesthesia" may not be a classic record or a masterpiece, but it's definitely a solid debut that will put them on the modern prog map. Perfectly blending elements of the classic era with more modern influences, this is a great starting point for a band that definitely have potential to make something great. I know that the vocals are an obstacle for me, dropping the rating significantly (because vocals are a big part of my music enjoyment), but instrumentally this album is great stuff, and is one of the better debut albums I've heard recently.