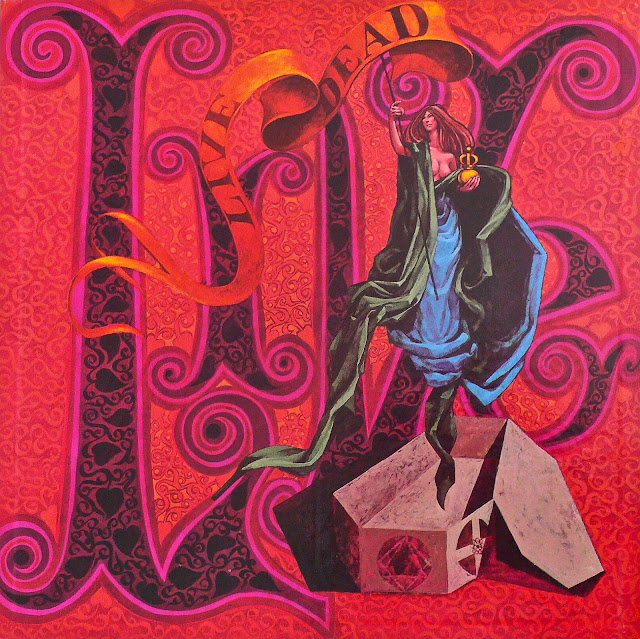 "Live / Dead" was the first in an endless row of the Grateful Dead's trademark double live albums and one of the best-loved ones. Tired of mimicking their live craft in the studio, or, at best, interpolating live stuff with pointless studio overdubs, the Dead finally agreed here to follow the usual way and split into a 'live band', putting out their real live experiences, and a 'studio band', putting out well-crafted studio recordings. Not that the two sides of the band wouldn't ever be meeting from now on, but for the most part, all of the band's acid excesses were now left on genuine live albums. Like this one. If you find out you hate the album, don't despair. It's certainly not for everybody. But let me tell you this, brothers and sisters - there is a way to enjoy the album, and the way lies in the album's incredible diversity. Oh well, wait a bit, it's not actually that diverse, because it's the Grateful Dead after all, and they don't do no Roy Wood kind of freakshow; they got their own. But what strikes me on here is that none of the seven tracks actually sound similar; all follow slightly different patterns, and you get to witness the Dead in all kinds of 'environments' - it's not just the notorious "acid jams" that you're gonna get, but rather a vast palette of styles and moods. I doubt that anybody but the most loyal Deadheads would enjoy the record in its entirety, though; most probably, you won't like all of these styles, and even I certainly don't. What good is there still makes the record well worth owning, though.

Actually, there's only one acid jam on there, the massive, epic "Dark Star" that opens the album. This is a number you have to get used to, but you know - you have to get used to it. An excellent amalgam of blues and jazz, all mostly played in a minor key for further moodiness, it showcases Garcia at his very, very best. Frankly speaking, I really don't know how it is theoretically possible to play all these twenty-minute solos without dropping dead at the end. The only person I know who's capable of doing that is Clapton, and we all know that Clapton is God, now don't we ? But truthfully, Jerry's masterful and atmospheric passages on "Dark Star" are quite comparable with some of Clapton's best jams in Cream. Particularly impressive is the moment when Jerry goes duelling with Bob Weir and the entire band just goes crazy without you even noticing it - everything is so smooth and well-controlled that even in the very middle of this endless jam they can still take you by surprise. Exhausted on that one, the band rips into an inspired rendition of "St. Stephen", completely obliterating the studio original. It's one of the shorter tunes on here, but also one of the tightest and most easily accessible - it's just a folksy little chant, after all.

Then the band goes really raunchy and rockin' on the stomping jam "The Eleven", where they are faster and angrier than anywhere else on the album. Then there's time for about fifteen minutes worth of goofiness: Pigpen steps in with an exaggerated, schizophrenic rendition of the old Rhythm'n'Blues song "Turn On Your Lovelight". Then they get into 'blues mode', playing a lengthy, drawn-out, bleeding little blooze number appropriately called "Death Don't Have No Mercy". Then things get weird again, with a lengthy, drawn-out, bleeding little noisefest appropriately called "Feedback"; and after abusing our ears for so long, the Dead close with a few farewellish vocal harmonies ("And We Bid You Goodnight"). Whatever the actual length of these pieces might be, you at least gotta give them their due - they're not overexhausting our patience. Well, not my patience, at least. My patience has learned how to stretch itself out through the long years full of hardship and toil and listening to too much Captain Beefheart. My patience is cool and relaxed; what about your patience, dear Sir ?

That said, patience is one thing, and pure enjoyability is another. Like I said, you probably won't like every style they tackle. Listen to me now. Me - I can easily tolerate "Dark Star", because it's really dark and really trippy and really takes you places, all the time never stopping you from tapping your foot and keeping within the groove. And I can easily tolerate "St Stephen", and to a lesser extent, "The Eleven" and "Death Don't Have No Mercy": the latter might be just ten minutes of generic blues, but it sets such a creepy, somber mood, that I take it. However, I just can't understand the very meaning of "Turn On Your Love Light". My hypothesis is that it's just Pigpen fooling around and trying to kill time or something. I mean, take something like the Stones' "Goin' Home", throw out the cool guitar lines and the exaggerated, hilarious vocals, throw in a drunk unfunny clown and you guarantee yourself some prime boredom. Likewise, I won't accept anything like "Feedback" in my world. If you want something really noisy and messy, go listen to Amon Düül II and spare yourself all that American feedback psychedelia crap. Even if you deem such things to be 'mind-liberating', there simply were lots of bands doing the noise schtick much better.

With all these faults, it's obvious I can't grant the album a maximum rating; even so, let's at least not forget that it's a double one and they managed to fit it all on one CD, so you can just disregard the twenty five minutes of stupid filler and concentrate on the fifty minutes of the really interesting stuff. Simply put, I highly doubt that in the America of 1969 there ever existed a band capable of producing something like "Dark Star" on the stage. Certainly not Quicksilver Messenger Service, who took their professional duties far lighter than the Grateful Dead. And definitely not the Jefferson Airplane, as Jorma Kaukonen never had the ace guitar skills of Jerry Garcia; besides, whenever that band entered jam mode, it was like they rather were playing lightweight pothead music, while the Grateful Dead were playing serious pothead music. Feel the difference ? I think, you don't really need to be a pothead to feel the difference.