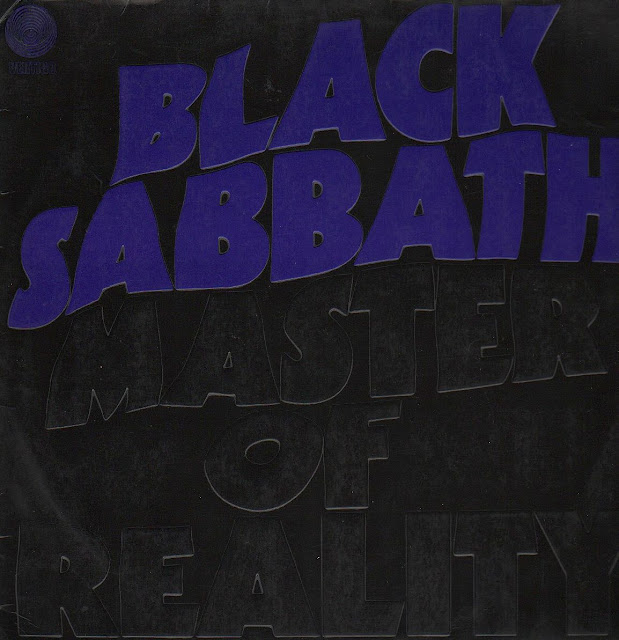 "Master Of Reality" was the third studio album by Black Sabbath, released on 21 July 1971. It is widely regarded as the foundation of Doom Metal, Stoner Rock, and Sludge Metal. It was certified double platinum after having sold over 2 million copies. "Master Of Reality" was Black Sabbath's first and only top 10 album in the US until "13", forty-two years later. "Master Of Reality" was recorded at Island Studios, in London, during February and April 1971. The album was produced by Rodger Bain, who had also produced Black Sabbath's previous two albums; this was to be his final collaboration with the band. On the tracks "Children of the Grave", "Lord of This World", and "Into the Void", guitarist Tony Iommi downtuned his guitar 1​1⁄2 steps to produce what he called a "bigger, heavier sound". This also reduced string tension, thus making the guitar less painful for him to play; Iommi had two of his fingers partially severed in a factory accident years earlier. Geezer Butler also downtuned his bass guitar to match Iommi. "It helped with the sound, too", Butler explained to Guitar for the Practicing Musician in 1994. "Then it got to the point where we tuned even lower to make it easier vocal-wise. But Osbourne would then sing higher so it sort of defeated the object." In the 2013 biography of the band Black Sabbath: Symptom of the Universe, Mick Wall writes that "the Sabbath sound took a plunge into even greater darkness. Bereft even of reverb, leaving their sound as dry as old bones dug up from some desert burial plot, the finished music's brutish force would so alarm the critics they would punish Sabbath in print for being blatantly thuggish, purposefully mindless, creepy, and obnoxious. Twenty years later groups like Smashing Pumpkins, Soundgarden, and, particularly, Nirvana, would excavate the same heaving lung sound. And be rewarded with critical garlands." In his autobiography I Am Ozzy, vocalist Ozzy Osbourne states that he cannot remember much about recording Master of Reality "apart from the fact that Tony detuned his guitar to make it easier to play, Geezer wrote "Sweet Leaf" about all the dope we'd been smoking, and "Children of the Grave" was the most kick-ass song we'd ever recorded."

In the liner notes to the 1998 live album "Reunion", drummer Bill Ward commented that "Master Of Reality" was "an exploratory album". In 2013, Mojo magazine called "Master Of Reality": "The sound of a band becoming increasingly comfortable in their studio surroundings." Iommi believes the band might have become too comfortable, however, telling Guitar World in 1992, "During "Master Of Reality", we started getting more experimental and began taking too much time to record. Ultimately, I think it really confused us. Sometimes I think I'd really like to go back to the way we recorded the first two albums. I've always preferred just going into the studio and playing, without spending a lot of time rehearsing or getting sounds." The song "Into the Void" was especially problematic, with Iommi revealing in the same interview: "We tried recording "Into the Void" in a couple of different studios because Bill just couldn't get it right. Whenever that happened, he would start believing that he wasn't capable of playing the song. He'd say: "To hell with it – I'm not doing this!" There was one track like that on every album, and "Into the Void" was the most difficult one on "Master Of Reality"." In his autobiography Iron Man: My Journey Through Heaven and Hell with Black Sabbath, Iommi describes the difficulty Osbourne also experienced recording the vocal: "It has this slow bit, but then the riff where Osbourne comes in is very fast. Osbourne had to sing really rapidly: "Rocket engines burning fuel so fast, up into the night sky they blast," quick words like that. Geezer had written all the words out for him. Seeing him try was hilarious." The song "Solitude" showcases guitarist Iommi's multi-instrumental talents, featuring him playing guitar, flute, and piano. A delay effect was later added to Osbourne's vocals on the song as a means of doubling the vocal track.

During the album's recording sessions, Osbourne brought Iommi a large joint which caused the guitarist to cough uncontrollably. Iommi was recording acoustic guitar parts at the time, and his coughing fit was captured on tape: A fragment of Iommi's coughing was later added by producer Bain as the intro to "Sweet Leaf," a song which was admittedly an ode to marijuana use. Iommi recalls "We all played 'Sweet Leaf' while stoned." In an interview with Guitar World in 2001 Butler recalled: "I do remember writing "Sweet Leaf" in the studio. I'd just come back from Dublin, and they'd had these cigarettes called Sweet Afton, which you could only get in Ireland. We were going: "What could we write about ?" I took out this cigarette packet, and as you opened it, it's got on the lid: "it's the sweetest leaf that gives you the taste" I was like: "Ah, Sweet Leaf!" Writing in Mojo in 2013, Phil Alexander observed: "To most it is the quintessential stoner anthem, a point borne out by Sabbath's own Olympian consumption of hashish during their early days." In the Black Sabbath concert film The Last Supper, Ward ruminates: "Did it enhance the music ? Well, you know, we wrote 'Sweet Leaf': 'When I first met you / didn't realize', that's about meeting marijuana, having a relationship with marijuana. That was part of our lifestyle at that time." Butler was (and remains) a Catholic and the song "After Forever" focuses entirely on Christian themes. At the time, Black Sabbath were suspected by some observers of being Satanists due to their dark sound, image, and lyrics. "After Forever" was released as a single along with "Fairies Wear Boots" in 1971.

The first editions of the album "Master Of Reality" came in an envelope sleeve containing a poster of the band, and with the album's title embossed in black lettering, visible in relief. Later editions lacking the embossed printing would render the album title in grey. This was the first Black Sabbath sleeve on which the lyrics were reproduced on the back of the sleeve. In his autobiography Iommi describes the cover as "Slightly Spinal Tap-ish, only well before Spinal Tap". On the first North American editions of the album, several songs had subtitles given to segments, making it appear that there were more songs than there actually were. The intro of "After Forever" was given the title "The Elegy", the outro of "Children of the Grave" was called "The Haunting", the intro of "Lord of This World" was titled "Step Up", and the intro of "Into the Void" called "Deathmask." This treatment had also been used on the North American editions of Black Sabbath's previous two albums. These pressings also incorrectly listed the album title as "Masters Of Reality". Subsequent editions corrected the album's title and removed three of the four subtitles (all but "The Elegy"). "Master Of Reality" peaked at number five on the UK Albums Chart, and number eight in the United States, where it achieved gold status on advance orders alone. It eventually sold two million copies in the US. Despite the album's commercial success, it was viewed with disdain by contemporary music critics. In The Village Voice, Robert Christgau called it "a dim-witted, amoral exploitation." Rolling Stone's Lester Bangs described it as monotonous and hardly an improvement over its predecessor, although he found the lyrics more revealing because they offer some answers to the dark cul-de-sacs of "Paranoid".

In 1994, "Master Of Reality" was ranked number 28 in Colin Larkin's Top 50 Heavy Metal Albums. Larkin described it as Sabbath's first real international breakthrough and a remarkable piece of work. In MusicHound Rock: The Essential Album Guide (1999), authors Gary Graff and Daniel Durcholz described the album as a brilliant skull crusher, singling out "Children of the Grave" and "Sweet Leaf" as timeless. In 2001, Q included it in their list of the 50 Heaviest Albums of All Time, calling it malevolent. Casting Black Sabbath as a Titanic-style house band on the eve of Armageddon, cranking it as the bomb drops. A critic for the magazine cited it as the most cohesive record of the band's first three albums. In 2003, Rolling Stone ranked the album number 298 in their list of the 500 greatest albums of all time. They described the album as representing the greatest sludge-metal band of them all in its prime. The same magazine also ranked the album 34th on its "100 Greatest Metal Albums of All Time". Billy Corgan, leader of The Smashing Pumpkins, considered "Master Of Reality" the album that spawned grunge. Black Sabbath and especially "Master Of Reality" was a huge influence of the 1990s stoner rock / Desert Rock scenes in the UK and the US, bands like Kyuss, Monster Magnet, Sleep, and Orange Goblin have cited Sabbath and "Master Of Reality" as a defining album of that genre. John Stanier, drummer for Helmet and Tomahawk, cited the record as the one that inspired him to become a musician. In 2013, Sabbath biographer Mick Wall praised Iommi's ability to incorporate more neat riffs and sudden unexpected time changes in one song than most bands would contemplate on an entire album. When I listen to things like "Master Of Reality", emarked Tool frontman Maynard James Keenan, I hear sort of heavy political rock'n'rolI, don't really hear them as heavy metal.

Songs from Master of Reality have been covered by a variety of bands. Several bands are named after songs on "Master Of Reality", or the album itself. Syracuse, New York hard rock band Masters Of Reality, who enjoyed moderate success in the 1990s, took their name from the album title. Metal bands After Forever and Orchid take their name from the album tracks of the same name. Mountain Goats leader John Darnielle wrote a short novel for the 33⅓ book series with "Master Of Reality" as a central theme. The book is written in the form of a diary of a young man who has been committed to a mental health treatment facility, and how the teen relates to the world through the songs on the album. The song "Solitude" was featured as the leitmotif of main character, Zombie, in the 1991 motion picture Zombie ja Kummitusjuna (Zombie and the Ghost Train) by Finnish director Mika Kaurismäki and also appeared in the ending scene of the episode Keep Calm and Carry On, from the TV series Supernatural. Future Black Sabbath producer Rick Rubin sampled "Sweet Leaf"'s main guitar riff in producing the Beastie Boys' 1986 song "Rhymin' and Stealin.'" The track "Into the Void" was featured at the beginning of Episode 23 (entitled "Hog Heaven") of the ninth season of the television series CSI: Crime Scene Investigation.