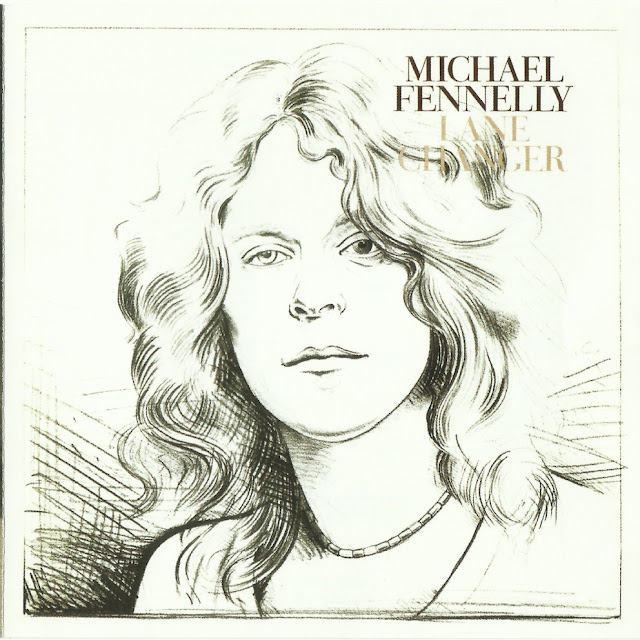 Signed to Epic Records on the strength of his demo songs, Fennelly would record his long-anticipated solo debut album, 1973’s Lane Changer, in England. Produced by former Zombies bassist Chris White, Fennelly was backed by a number of England’s best, tho’ admittedly underrated musicians of the era, including bassists Dave Wintour (who had played with Rick Wakeman) and Jim Rodford (Argent, and later with the Kinks); and drummers Robert Henrit (Argent, and another future alum of the Kinks) and Henry Spinetti (who would later play with both Eric Clapton and George Harrison). Argent’s Russ Ballard added backing vocals on several tracks. In-demand U.K. session horn players Mike Cotton and Alan Holmes augment a number of performances on the album with their immense sound, and Fennelly’s former Crabby Appleton bandmate Casey Foutz brought his keyboard prowess to the party.

In many ways, Lane Changer continues in a similar vein to Crabby Appleton’s Rotten To The Core; that is, hard-charging rock ‘n’ roll with pop and psychedelic undertones. The album-opening title track is an engaging slab o’ slippery hard rock featuring Fennelly’s lofty vocals, a busy arrangement with chaotic instrumentation, and rapidly-shifting changes in musical direction, all held together by Fennelly’s wiry fretwork which runs throughout the song. By contrast, “Touch My Soul” is a gentle, slow-paced ballad that mixes a folkish lyrical construction with touched of gospel grandeur and Fennelly’s soaring vocals. The highlight of the song, however, is Fennelly’s underrated guitar playing, which bolsters a wonderful vocal performance with both emotion and imagination.

Jumping right back into high-octane, hard rock territory, “Won’t You Please Do That” is an unabashed Zep knock-off that expands that band’s classic sound even further with Fennelly’s hypnotizing guitar, explosive rhythms, and a call-and-response chorus that includes Argent, Ballard, and an unnamed “mystery singer” that sounds suspiciously familiar. “Dark Night” is more of a stripped-down affair, with Fennelly’s haunting vocals front and center in front of a simple bass/drums rhythm and flourishes courtesy of Casey Foutz’s Mini-Moog.**** It’s a downright beautiful song, full of texture and complexity, with a lot of musical invention hiding in the grooves beneath Fennelly’s soulful vocals and Foutz’s symphonic swells and electronic sojourning.

The solo performance “Easy To Love” displays Fennelly’s talents nicely, his acoustic guitar strum nestling right nicely up against his expressive vocals, which at times hit a tone not unlike bluesman Skip James’ voice on what is otherwise an engaging folk-rock ballad. “Shine A Light” builds upon its predecessor, adding drums and bass to an unassuming, mid-tempo rocker that offers some of Fennelly’s most inspired fretwork on Lane Changer, his breathless vocals punctuated by a short but lovely solo. On the other hand, “Bad Times” offers up some good ol’ ‘70s-styled dino-stomp with bombastic rhythms and blazing guitar, the song’s lengthy intro leaping, headfirst into a raging boogie-rock with Fennelly’s sly guitar leading the charge.

A stunning, guitar-driven rocker, “Watch Yourself,” features an uncredited Jeff Beck playing lead guitar while Fennelly himself keeps pace with an intricate rhythm guitar performance, his high-flying vocals presaging the rise of the arena-rock godhead. The album ends with a classic fake-out in “Give Me Your Money,” the song starting as a sort of jazz-flecked, late-night torch-song with a dark ambiance and syncopated rhythms driven by Foutz’s tinkling keys before bursting out into a fast ‘n’ furious boogie blast that, once spent, gives way to the song’s darker tones and slower pace. It’s a truly schitzo and altogether wonderful performance to close out the unique musical experience that is Lane Changer.