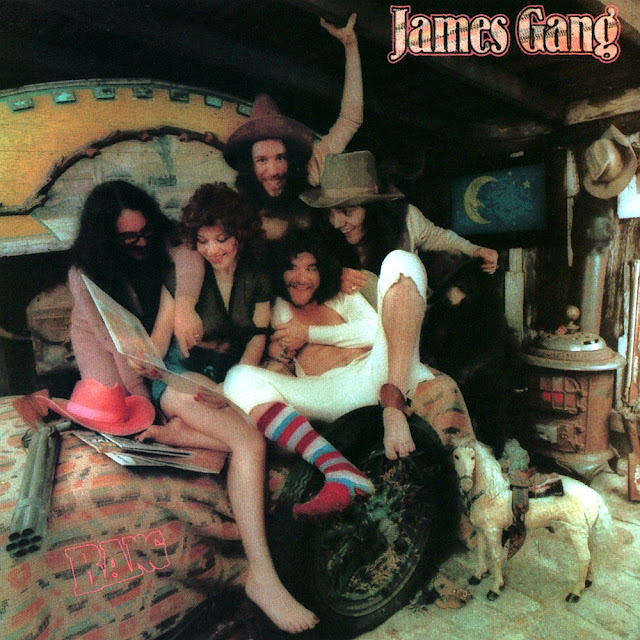 The James Gang was originally formed by drummer Jim Fox in Cleveland, Ohio in 1966. Though guitarist/singer Joe Walsh is most often associated with the early and highly successful James Gang, he actually was the replacement for Glenn Schwartz, who departed in January, 1968. Jim Fox relates that the gap between Schwartz leaving and Joe joining was less than 48 hours. Dale Peters, who later played in the lineup with Tommy on guitar, came in on bass after the release of Yer Album, the group’s first with Walsh. The band’s music combined both American and British rock influences. With Walsh the band toured England opening for The Who, as well as having success with album and touring sales in the United States.

Walsh left James Gang in late 1971, in part because he was envisioning music that could not be performed with a power trio. He then moved to Boulder, Colorado. His immediate replacement on guitar was Domenic Troiano, while Roy Kenner was brought in on vocals. In Boulder Walsh took six months to study ham radio and chill out. He then began to hook up with musicians such as bassist Kenny Passarelli and keyboardist Tom Stephenson, who were playing with Tommy Bolin in the first lineup of Energy. Tommy and Walsh also met during this period, and often jammed and recorded at Joe’s garage studio. Passarelli split from Energy to join Walsh in his new band Barnstorm, which offered an immediate chance at fortune and fame. Tommy was then forced to look for a new bass player and scored with Stephenson’s cousin Stanley Sheldon. Tommy and Energy played through until early 1973, when Tom Stephenson left to join Walsh and Passarelli in Walsh’s band, and Tommy was again forced to replace a player. This time Max Gronenthal was then brought in on keyboards and vocals, but the end was near and Tommy left for New York City to record Spectrum with Billy Cobham in May.

The James Gang had not been doing as well as they had hoped for with Troiano on guitar, and Walsh was quick to recommend Tommy for a replacement. That recommendation was partly based on the intensely positive rush Tommy’s playing on Spectrum was generating, plus possibly an effort to pay Tommy back for Joe having nicked Passarelli and Stephenson from Energy. On meeting Tommy in August of 1973, Jim Fox and Dale Peters said they were impressed by Spectrum, but were concerned about Tommy’s ability to play rock. Fifteen minutes into the live audition Tommy was signed on. The new lineup went to work almost immediately on the "Bang" album during August and September, 1973 at the Cleveland Recording Company, and was released in October. The album cover photo had already been taken while Domenic Troiano was still with the band, and the album went out using the same photo with Tommy’s face replacing Troiano’s, fairly seamlessly given the technology of the day.

"Bang" relied heavily on the stockpile of songs Tommy had written with Jeff Cook in Energy, with John Tesar separately, and from solo demos he had been doing on the reel-to-reel tape deck Mike Drumm had helped him buy. One interesting example is "Got No Time for Trouble", which was a Bolin/Tesar song that had been sung by Jeff Cook on an Energy studio demo and can be heard on the "Tommy Bolin Archives Energy" CD. Of the album’s nine tracks, Tommy had written or co-written eight. In the beginning Tommy got along well with singer Roy Kenner. They enjoyed singing a cappella together, and Kenner helped coach Tommy on his singing, a place where his confidence was low. Tommy’s lead vocal on "Alexis" could not have been more perfect for the track. Later their friendship would slowly deteriorate as competition for the spotlight would contribute to driving them apart.

The album turned out very well as the band transformed Tommy’s songs into well-polished studio gems. The record label’s choice for the first single, however, was not to the band’s liking: “Must Be Love” started getting radio airplay quickly. Other songs such as “Standing In the Rain” and “Alexis” were also played by FM stations which at the time had creatively adventurous play lists. Jim Fox loved “Standing in the Rain” and fought hard for it to be the next single. Atco eventually relented and it hit in the Top 100. "Bang" stands as one of the strongest rock statements of the period. Not only are the arrangements and performances crisp and catchy, but Tommy also laid down guitar that was on par with his performances on Spectrum. To many people this album contains the quintessential essence of Tommy’s guitar tone and fire. The guitar solo in "From Another Time" is a textbook example of his ability to play with grace, fire and precision even at fast tempos. The notes still raise your hair even if the track is played at half speed. "Mystery" was another standout with its stellar string arrangements by Jimmy Haskell, reminiscent of Paul Buckmaster’s work with Elton John.