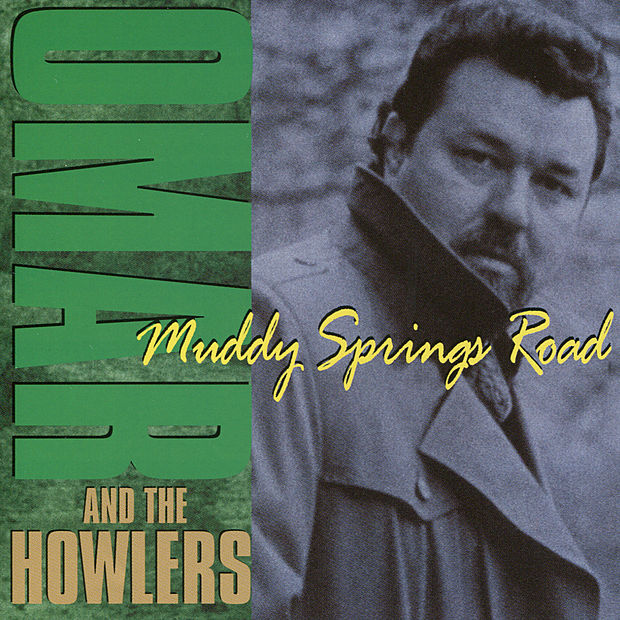 The nominal frontman of the Austin, Texas-based swamp rock unit Omar & the Howlers, singer and guitarist Omar Dykes was born in McComb, Mississippi in 1950 (not coincidentally also the birthplace of Bo Diddley, whose signature beat informed much of Dykes' music). Weaned on his mother's eclectic collection of country, rock & roll and soul records, he began venturing into area juke joints during his early teen years, and after picking up guitar, he returned to these same clubs to launch his performing career. After graduating high school, Dykes wandered about Mississippi for a few years before finally relocating to Austin in 1976; there he was befriended by Stevie Ray Vaughan, and a short time later set about forming the Howlers, who made their debut in 1980 with "Big Leg Beat". After 1984's "I Told You So", the group signed to Columbia Records for 1987's "Hard Times in the Land of Plenty". Although their major-label tenure was short-lived, Omar & The Howlers remained an Austin fixture throughout the years to come, also attracting a large European cult audience. In 2007 Dykes teamed up with Jimmie Vaughan for an album of Jimmy Reed covers, recorded for the Ruf label, "On the Jimmy Reed Highway". "Big Town Playboy", Dykes' first solo album, was released two years later also on Ruf Records. Another tribute session was issued in 2013, this time as a solo artist, "Runnin' with the Wolf", featuring the music of Howlin' Wolf.

Austin, besides being the Texas state capital, is home to much of the best in American roots music. Since the 1970s, gutsy blues players, renegade country pickers, and raw-voiced rockers have mixed & matched their musical styles in Austin ’s thriving club scene. And that’s where Kent “Omar” Dykes holds court too. He hails from McComb, Mississippi, a town with the distinction of being home turf for Bo Didley. Omar started playing guitar at seven, took to hanging out in edge-of-town juke joints at 12, joined his first band at 13, the next youngest player being 50, and started honing his music. He was still Kent Dykes in those days, but by the time he hit 20 he had hooked up with a crazy party band, called the Howlers, looking back, he says, “We had two saxophone players on baritone and tenor who wore Henry Kissinger masks. They were called the Kissinger Brothers. Not on every song, mind you. Sometimes it was Dolly Parton playing saxophone. Or Cher. And we had these cardboard cutouts from record stores for skits.” They even did fake ads for Sunshine Collard Greens and Howlers’ Fried Chicken “for that old-fashioned taste that tastes just like Grandma.” It was a crazy time, but a lot of fun too, with the rough & tumble Howlers playing R&B, Rock & Roll and even the occasional polka and western swing tunes. But Kent Dykes mostly just wanted to play blues. And by then the other Howlers had taken to calling him “Omar Overtone” because he tended to let his guitar feedback on stage while he dropped to the floor to spin on his back in a spontaneous, Big & Tall Store take on break-dancing. As he says, those performances were “sometimes fueled by, a-hmm, alcohol.”

By 1976, the Howlers decided to move and relocate to Austin, where such clubs as the Soap Creek Saloon, the Broken Spoke, the Armadillo World Headquarters and Antone’s had created a haven for renegade music. “We worked out of Austin for about a year,” Omar says, “but a lot of the guys decided they weren’t cut out to play music full-time for the rest of their lives. They headed back to Mississippi and Arkansas , and I decided to keep the name. Nobody objected.” And as Dykes says, Omar & the Howlers works better than Kent & the Howlers. Of such decisions are careers made. Fronting a new lineup, Dykes honed a band capable of the sort of raw, rowdy, rambunctious blues that made Howlin’ Wolf and Hound Dog Taylor legends. Omar's first release was "Big Leg Beat" in 1980, shortly followed by "I Told You So" 1984, earning Omar & the Howlers consecutive Austin band of the year awards in 1985-1986. "Hard Time in the Land of Plenty" followed in 1987. But really that was just the beginning as Omar followed up with another twelve albums in the next fourteen years; "Wall Of Pride" 1988, "Monkey Land" 1988, "Live at the Paradiso", "Courts Of Lulu", "Blues Bag" all in 1992. "Blues Bag" was Omar's first solo album followed by a second solo album, "Muddy Springs Road" in 1995. Omar also released "World Wide Open" in 1995. Next up was "Southern Style" 1996, "Swingland" 1998 followed with two releases; "Live At The Opera House" and "The Screaming Cat" both in 2000. But that's not all; Omar came on with "Big Delta" in 2001 and "Boogie Man" in 2003.

On "Boogie Man", Omar brought in songwriter friends he’s made since he left Mississippi for Texas 27 years earlier. "Co-writing at that point in my life was a lot of fun. To me it’s like free songs. These are ones that I wouldn’t have had the patience to sit down and write on my own. But when you get with friends and drink coffee, tell jokes and stories, and then write something, it always turns out to be something different than what you might have done on your own". Plus it’s not exactly heavy lifting to work with such Texas icons as Ray Wyle Hubbard, Darden Smith, Alejandro Escovedo and Stephen Bruton. Besides the songwriting collaborators, Omar also brought some friends into the recording studio, including guitarists Chris Duarte and Jon Dee Graham (True Believers), Chris Layton and Tommy Shannon of Stevie Ray Vaughan’s Double Trouble, George Rains (Sir Douglas Quintet and house drummer on scores of Antone’s label releases) and his frequent running-mates Terry Bozzio (Missing Persons, Jeff Beck, Frank Zappa) and Malcolm 'Papa Mali' Welbourne. In 2006 Omar was back with more and did another four albums in the next four years; "Bamboozled" 2006, "On The Jimmy Reed Highway" (with Jimmie Vaughn) 2007, "Chapel Hill" (with Nalle, Omar and Magic Slim) 2008 and then in 2009 with "Big Town Playboy". 2011 finds Omar tighter, funkier than ever and slated with a great new release in 2012. But Omar always loves to play live; "I still do 150-160 shows a year, and with travel days that adds up to a lot of time away from home. It always seems like we’re on a plane headed somewhere".

Kent "Omar" Dykes has rid himself of the annoying mannerisms which spoiled his earlier blues-revival albums. The Texas-based bluesman has stripped down his arrangements and disciplined his vocals to pare away the excessive, self-aggrandizing flourishes. What remains, on "Muddy Springs Road", is a single-minded emphasis on rhythmic grooves and on Dykes's deep, raspy baritone. For this album, Dykes abandoned his customary trio format to lead a septet of Austin all-stars, including such notables as harmonica player Gary Primich, keyboardist Nick Connolly, and drummer George Rains. The larger number of musicians behind him must have convinced Dykes he didn't have to do everything himself, for he plays and sings with far more restraint than he has ever displayed. From the Hooker boogie of "Midnight Ramblin' Man" and the Slim Harpo swamp sound of "Life Is Just a Circle," to the Chuck Berry riff of "Get Hip" and the Bo Diddley beat of "Hoo Doo Ball," Dykes's rhythms are derivative but admirably executed. Dykes wrote all 11 of the album's songs, but his musical ideas are borrowed and his lyrical ones are trite. The title track, for example, is supposedly an autobiographical look at his childhood on the Mississippi Delta, but it simply serves up such clichés as "Used to spend my days down across the tracks where the whiskey was white and the blues was black".