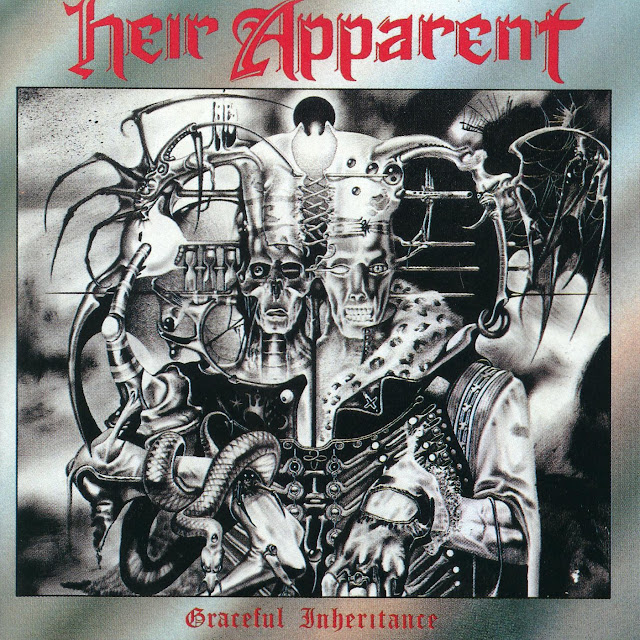 Founded in 1984, Heir Apparent issued a pair of groundbreaking albums between 1986 and 1989. The music of this Seattle-based band spans a range from progressive speed metal to acoustic-driven power ballads, fused with melodic and intelligent lyrical themes, and respected for their intense and emotive live performances. The genesis of Heir Apparent began in 1983 when Terry began auditioning vocalists and musicians after writing three songs ("The Servant", "Dragon's Lair", and "Keeper of the Reign") and receiving very positive feedback from Kim Harris, manager of Queensrÿche. Terry recruited bassist Derek Peace and drummer Jim Kovach, reuniting a trio that had last played together in a cover band a few years earlier. During this time they called themselves Sapien. Derek introduced vocalist Corey Rivers to the project, bringing two songs from their previous band, Helm's Deep ("Hands of Destiny" and "Tear Down the Walls"). During the next 4 months under the name of Nemesis, most of the material that would later end up on the Graceful Inheritance album would be conceived.

In February 1984, Corey Rivers left the band to concentrate on his career, and vocalist Paul Davidson was recruited for the album recordings that had been scheduled for that summer (Terry and Paul had played in a cover band in 1980 under the name Renegade). This is the point at which Terry changed the band name to Heir Apparent. In June of 1984, due to the demands of Queensrÿche, the management team of Kim and Dianne Harris withdrew from their committment to manage Heir Apparent and finance the album recording. Triad Studios had been booked for the month of July. In order to maintain momentum and salvage the booking in any way possible, the recording was scaled back to a 5 song demo financed by Terry. The engineer for the sessions was Tom Hall, whose previous credits included Queensrÿche's EP. Although Heir Apparent soon began receiving local radio play from two of the songs, Jim Kovach left the band to begin his teaching career in August of 1984. In September of 1984, Ray Schwartz joined as the new drummer. Heir Apparent prepared for gigs and continued to write material to complete a future album. After playing two shows with Perennial in eastern Washington and Idaho, the band played its first headlining gig in Seattle at the Moore Theater on December 21, 1984.

In early 1985, with positive reviews on the demo, Terry once again borrowed money from family and friends to finance the recording of the first half of an album at Triad. Heir Apparent took a break from recording to perform on live television at Eastern Washington University in April of 1985. Tom Hall engineeered the live television session. In the summer of 1985, the band caught the interest of Black Dragon Records in Paris, France. In October of 1985, Heir Apparent signed with Black Dragon and completed the album. Graceful Inheritance was released in Europe in January of 1986, and with radio play and great reviews, Heir Apparent toured Europe, playing a dozen concerts with Savage Grace on the Metal Hammer Roadshow in May and June of 1986. Upon returning from Europe, the band was faced with the reality that without professional management and a US release, they were once again on their own. Derek moved to LA to tour with Savage Grace, and it was time to regroup. In September 1986, Terry brought keyboardist Mike Jackson into the project and the two began writing. Also in September 1986, Black Dragon released "Graceful Inheritance" on CD, making it the first compact disc ever released by an independent record label in Europe. In November 1986, Duane Bakke joined as bassist. This new lineup played their one and only concert headlining Seattle's Paramount Theater on New Years' Eve 1986.

In January 1987, Heir Apparent moved into Studio B at Triad Studios, where they rehearsed and recorded until mid-1988. In the spring of 1987, Heir Apparent recorded "Tomorrow Night" and "We, the People". With renewed label interest brewing, Derek Peace returned to the band. Shortly thereafter, citing health issues that affected his singing, Paul Davidson decided to leave the band in April of 1987. With label interest and gigs booked, Heir Apparent was under pressure to find a new singer. Steve Benito was recruited as vocalist in May 1987, moving from Portland to Seattle. Steve brought three songs with him ("Alone Again", "Two Hearts", and "Screaming"), and Heir Apparent was on their way once again. Steve recorded new vocals on "Keeper of the Reign" and "We, the People" for a new demo, and the new lineup played their first gig headlining St. Martin's Pavilion on July 4, 1987.

The band continued writing and shopping for a deal for the next year, playing several local gigs. In January 1988, they recorded eleven new songs, mixed to stereo live by Tom Hall. This live demo became an underground tape trader classic, and 12 years later this would be released on CD. Heir Apparent's break came when they were asked to fill in for Poison as the opener for David Lee Roth in the Seattle Center Coliseum in June of 1988. To this point, the new lineup had only performed publicly 5 times. In October of 1988, Heir Apparent signed a seven album contract with Metal Blade/Capitol Records, and recording began at Triad Studios, once again with Tom Hall engineering. Heir Apparent expanded into progressive metal with the material on One Small Voice. Although the future was very promising, tensions surrounding business commitment and finances within the band caused a rift that split the group before the album was released in June of 1989. Almost a decade would pass before interest in Heir Apparent was rekindled by the birth of digital recording, file sharing, and the Internet.

In 1999, Terry Gorle signed an agreement with Hellion Records in Germany to reissue Graceful Inheritance, and release the Triad Studio demos on CD. In 2000, the original musicians (Gorle, Peace, and Schwartz) reunited at the Wacken Open Air festival in Germany with guest vocalist Mike Flatters. Terry reformed Heir Apparent with a new lineup in 2002, comprised of vocalist Bryan Hagan, bassist Bobby Ferkovich, and drummer Clint Clark. This lineup performed more concerts in just a few months than any other before or since. In 2003, Peter Orullian became the vocalist, and Op Sakiya was added on keyboards. With Jeff McCormack replacing Clint Clark on drums, the 2004 lineup returned to Europe in 2006 to headline the "Keep It True" VII Festival in Germany along with two concerts in Greece. In January of 2012, the original musicians (Gorle, Peace, and Schwartz) once again reunited with guest vocalist Jeff Carrell, returning to Greece for two shows and then on to the Metal Assault II Festival in Würzburg, Germany.

In March of 2015, vocalist Will Shaw joined the Heir Apparent lineup of Gorle, Peace, Schwartz, and Sakiya. The new Heir Apparent lineup performed their first of four scheduled "30th Anniversary" festival appearances in October 2015 at the Play It Loud Festival in Brescia, Italy. This show was followed in February 2016 by two festival appearances in Greece, Up The Hammers in Athens, and the Excalibur Festival in Thessaloniki. The band returned to Germany in April 2016 to co-headline KEEP IT TRUE XIX. In June 2016 Heir Apparent signed a third album contract with No Remorse Records, with an expected release date in October 2018.

Their debut effort, 1986's Graceful Inheritance (featuring singer Paul Davidson, guitarist Terry Gorle, bassist Derek Peace, and drummer Ray Schwartz) remains the highest rated album in the history of Germany's ROCK HARD magazine, rated at 49 of 50 points by the 5-man editorial staff when released in January of 1986. In 2005, "Graceful Inheritance" was placed at #188 in ROCK HARD's "Best of Rock and Metal - Top 500 albums of all time" hardcover book which catalogs 40 years of rock and metal music history. It is worth noting that this album had never been released in the US until a 30th Anniversary limited edition vinyl was produced in January 2016 by NW Metalworx. Critically acclaimed by collectors and a very dedicated fan base, the catalog of Heir Apparent recordings and concert videos has continued to be reissued by various independent record labels in Europe over the past 30 years.