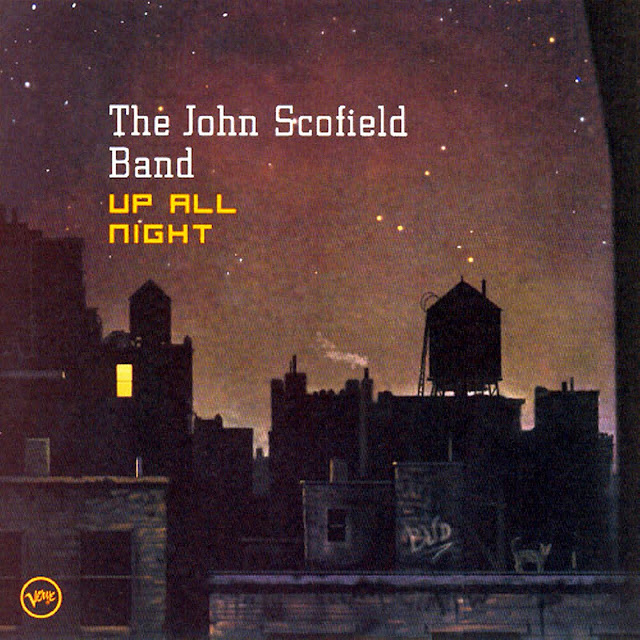 John Scofield, born December 26, 1951, often referred to as 'Sco', is an American jazz-rock guitarist and composer whose playing spans bebop, jazz fusion, funk, blues, soul, and rock. He has played and collaborated with Miles Davis, Dave Liebman, Joe Henderson, Charles Mingus, Joey DeFrancesco, Herbie Hancock, Pat Metheny, Bill Frisell, Joe Lovano, Pat Martino, Mavis Staples, Phil Lesh, Billy Cobham, Medeski Martin & Wood, George Duke, Jaco Pastorius, John Mayer, Robert Glasper, and Gov't Mule. Scofield's family left Ohio and relocated to the small, then mostly rural town of Wilton, Connecticut; it was here that he discovered his interest in music. Educated at the Berklee College of Music, Scofield eventually left school to record with Chet Baker and Gerry Mulligan. He joined The Billy Cobham / George Duke Band soon after and spent two years playing, recording and touring with them. He recorded with Charles Mingus in 1976, and replaced Pat Metheny in Gary Burton's quartet. Scofield received an Honorary Doctorate of Music from Berklee in 1997. In 1976 Scofield signed with Enja Records and released his first album, "John Scofield", in 1977. He recorded with pianist Hal Galper, first on his own solo album "Rough House" in 1978, and then on Galper's album "Ivory Forest" (1980), where he played a solo rendition of Thelonious Monk's "Monk's Mood".

In 1979 he formed a trio with his mentor Steve Swallow and Adam Nussbaum which, with drummer Bill Stewart replacing Nussbaum, has become the signature group of Scofield's career. In 1982, he joined Miles Davis, with whom he remained for three and a half years. He contributed tunes and guitar work to three of Davis's albums, "Star People", "Decoy", and "You're Under Arrest". After he left Miles Davis, he released "Electric Outlet" (1984) and "Still Warm" (1985). He started what is now referred to as his Blue Matter Band, with Dennis Chambers on drums, Gary Grainger on bass, and Mitchel Forman, Robert Aries, or Jim Beard on keyboards. The band released the albums "Blue Matter", "Loud Jazz" and "Pick Hits Live". Marc Johnson formed Bass Desires with Peter Erskine, and Bill Frisell. This "most auspicious pairing since John McLaughlin and Carlos Santana" was only transitory and recorded just two records, the self-titled "Bass Desires" and "Second Sight" (1986 and 1987). At the beginning of the 1990s, Scofield formed a quartet that included Joe Lovano with whom he recorded several albums for Blue Note Records. "Time on My Hands" (1990), with Joe Lovano, Charlie Haden and Jack DeJohnette, showcased Scofield's guitar and Mingus-influenced writing. Bill Stewart became the group's drummer and played on "Meant to Be" (1991) and "What We Do" (1993). In 1992, Scofield released "Grace Under Pressure", featuring fellow guitarist Bill Frisell, with Charlie Haden on bass and Joey Baron on drums. Stewart rejoined with Scofield and bassist Steve Swallow for the 1994 collaboration with Pat Metheny, "I Can See Your House from Here".

Towards the end of his tenure with Blue Note, Scofield returned to a more funk and soul jazz-oriented sound, a direction which has dominated much of his subsequent output. In 1994 and 1995, he formed a group that included organist and pianist Larry Goldings, bassist Dennis Irwin, and alternately drummers, Bill Stewart and Idris Muhammad. The group toured extensively, and the albums Hand Jive and Groove Elation feature this funk, groove, soul-jazz dimension in Scofield's music, bringing in tenor saxophonist Eddie Harris, percussionist Don Alias, trumpeter Randy Brecker, and others. He recorded the acclaimed 1997 album "A Go Go" with the avant-garde jazz trio Medeski, Martin & Wood. Also during this period, his relationship began with British composer Mark-Anthony Turnage. First as a soloist on Turnage's "Blood on the Floor: Elegy for Andy", the two paired up to create "Scorched", Turnage's orchestrations of Scofield compositions largely form the "Blue Matter" period. Scorched, a recording available on Deutsche Grammophon, debuted in Frankfurt, Germany.

He released "Überjam" in 2002 and "Up All Night" in 2003, two albums on which he experiments with drum'n'bass and other modern rhythms. "Up All Night" was John Scofield's sixth album for the Verve label, and the second for the band. For this recording, the band included second guitarist Avi Bortnick and drummer Adam Deitch, both of whom were also featured on the band's debut recording "Überjam". The recording also features bassist Andy Hess, who replaced Jesse Murphy in the band after "Überjam" was recorded.. The quartet was backed by a four-person horn section on six of the tracks. The recording featured The Dramatics 1971 hit "Whatcha See Is Whatcha Get," the only track that was not an original. Five of the songs on the album were written by Scofield, and five were co-written by Scofield and the band. On All About Jazz Farrell Lowe begins his review "The Freaky Deaky is back", referring to Scofield's time playing with Miles Davis, "this is the most inspired playing I have heard from John Scofield in many years". "Scofield inhabits a place in which the cerebral and the funky form an alliance and work together for the common good", Alex Henderson writes in his four star review on AllMusic, and concludes: "Up All Night" is a consistently engaging addition to his sizable catalog. Whereas on JazzTimes Nate Chinen writes in his critique, "Scofield and crew acquit themselves flawlessly to the material, but there are no real clunkers on the album (despite a cheeky "Watch Out for Po-Po", which comes close). What seems to be missing is the edgy sensibility of a band reaching beyond its limits. It should serve as a testament to Scofield that those borders have already been stretched to the extreme.

John Scofield has also worked and recorded in Europe with nu-fusionist Bugge Wesseltoft New Conception of Jazz in 2001/2 and 2006. Late 2004 saw the release of "EnRoute: John Scofield Trio LIVE", which features the jazz trio of John Scofield, the venerable Steve Swallow on bass and Bill Stewart on drums. It was recorded live at The Blue Note in NYC in December 2003. The next year, he released "That's What I Say: John Scofield Plays the Music of Ray Charles" - Scofield with an all-star guest studded collection of Ray Charles material. This led to a series of performances with Mavis Staples, Gary Versace on organ, John Benitez on bass, and Steve Hass on drums.

After sitting in for two engagements in December (3rd & 4th) of 2005 with Phil Lesh and Friends, Scofield has since played numerous shows with the band. On September 26, 2006 he released "Out Louder", his second collaborative effort album with avant garde jazz trio Medeski, Martin & Wood. The group, known collectively as MSMW toured extensively worldwide in 2006 and 2007, with sporadic engagements planned in the future. Scofield also performs as a duo with John Medeski, aptly named The Johns and another groove trio with Scofield, Medeski and drummer Adam Deitch. September 18, 2007 saw "This Meets That" released on EmArcy Records - Universal Music's jazz label, a record featuring Steve Swallow, Bill Stewart and a horn trio. Scofield has also recorded music inspired by gospel music, notably on the 2009 release Piety Street with bassist George Porter, Jr. and singer/keyboardist Jon Cleary.

Scofield's 2010 release "54" had its origins in the 1990s when Vince Mendoza asked John Scofield to play on his first album. Scofield has since been featured on two of Mendoza's records. When Mendoza assumed directorship of The Metropole Orchestra, he and Scofield collaborated on a series of Mendoza's arrangements of Scofield compositions performed with The Metropole Orchestra. In April 2010, Scofield was named an Officier of the Ordre des Arts et des Lettres by the French Ministry of Culture. In January 2011 he released "A Moment's Peace" with pianist and organist Larry Goldings, bassist Scott Colley and drummer Brian Blade on EmArcy Records. Scofield is currently serving as an adjunct faculty member in the Jazz Department at New York University's Steinhardt School of Education. He married Susan Scofield in 1978. They are the parents of music producer Jean Scofield (born 1981) and Evan Scofield (1987–2013).