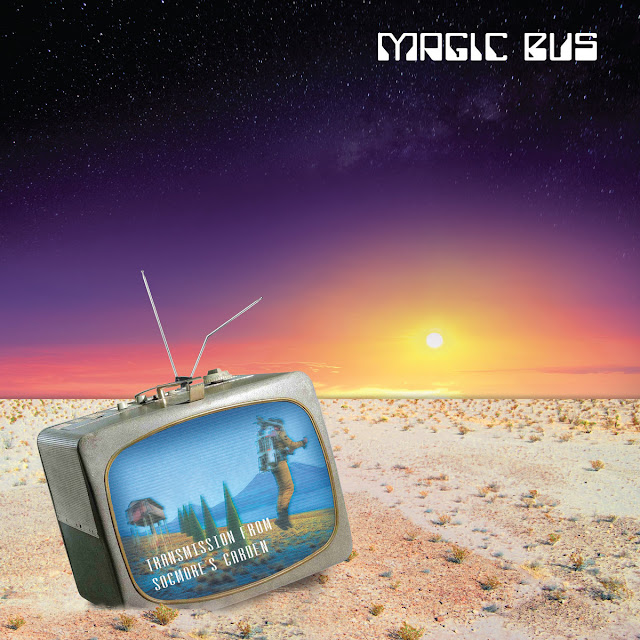 Hailing the that hotbed of rock'n'roll excess, Totnes in Devon, Magic Bus are rather accurately musically described on their PR sheet as turning out "sun-drenched harmonies and vintage prog rock noodling". That kind of retro warning would normally have me groaning, but Transmission From Sogmore's Garden is such a charming affair, you'd have to be an even more battle-weary old scrote than moi not to appreciate its thorough winsomeness. There is a review on Amazon that is headlined "Better than Caravan ?", well, obviously not, but these chaps and chappess have certainly been playing the first few albums by the Canterbury instigators on heavy rotate, along with large helpings of the the first two Crosby Stills Nash & Young albums. There are worse things to be influenced by, it has to be said. Opening with "Sunflower", Magic Bus lay their cards on the table. This band are not going to be pushing any envelopes anywhere soon, but hey, that's just fine. Nostalgia certainly is what it used to be in Sogmore's Garden. "Sunflower" is infused with a heady West Coast aroma, via Welsh wizards Man's own appropriated Californian vibe on their Rhinos album. Led by a winsome flute line it skips away down the winding path, full of the joys of life, including a very Caravan-esque solo from the keys player.

Three of the songs here were composed by singer and guitarist Paul Evans, the remainder by Evans in tandem with keyboard player Jay Darlington. Paul has one of those voices that while it sometimes struggles with staying on note in a fashion similar to Pye Hastings' charmingly strained high croon, manages not to make me wince, but smile to myself. This despite living with perfect pitch, which can be a curse as much as a blessing, particularly as I no longer have a practical use for it. Paul's singing is enhanced no end by the lovely harmonies of Viv Goodwin, Benny Brooke and Terence Waldstradt, the "flowers in the hair" on the head of the blissed-out and occasionally wavering lead voice. The top line instrumentation consists of guitar, keyboards, mostly of the organ variety, and flute, in varying combos. You will have recognised the name of the keyboard player, yep, it's the tall one from Kula Shaker. After the demise of Kula Shaker, Jay Darlington spent five years as the touring ivory tinkler with Oasis, but we'll forgive him that, everyone has to make a living. More recently he has reconnected with his true pastoral psych-prog calling, contributing organ to a couple of cuts on the fabulous "The Unrecorded Beam" by fellow Devonians Billy Bottle & The Multiple, as well as being a full-time member of Magic Bus since their debut album in 2010. However, this second album is not a showcase for any one individual, but a complete band effort. Even so, that won't stop me mentioning the organ break four and a half minutes in to "Seven Wonders", which is a straight copy of Dave Sinclair's reedy sound on "Nine Feet Underground".

What Paul might lack technically in the tonsil department, but not I must emphasise to the detriment of the record, he more than makes up for with his gently fried guitar lines. Together with Jay's swelling organ, the two make for a lovely combination on the introduction to the rambling and pastoral "Ballad of Lord Sogmore", which from the start of the vocal section has that indefinable "getting it together in the country" feel that Traffic used to great effect waaay back in the day. Paul's marvellously acidic solo towards the end of the tune is followed by a flute solo on the outro, all quite lovely. And that is the general tone of the album, as it combines drifting across the cosmic vastness under the influence of many cups of mushroom tea with an inescapable pastoral English vibe. "Cosmic Rays Of Dawn" lights the way with a waltz across the lawn, and "Three Days" hints that if they could do it again, they'd do it all over you, I'm sure. "Climb aboard the bus, let's head off for the summer" sings Paul, and indeed this is one of those hazy, lazy records recalling stoned days in the countryside. Marvellous. Pretty soon the Bus is away across the universe on an expanded trip, and it's real good out here, we may even be immaculate. Hints of jazzy keys enlighten "Jupiter 3AM", Dave briefly vacating the place behind the electric piano, Steve takes over, only for one album. Jay knows his Caravan keyboard players, is all I'm saying! Melody is never far away, and a simple but effective tune points the way to the small hours as the biggest planet fills our view, before the trip goes skewiff on the back of a atypically aggressive section. Flung back out of gravity's pull, the trip continues.

That's probably more than enough individual track description. If you like what you've heard and hopefully read, then just go buy the thing! Helpful links provided at the end of this nonsense. I'm always griping about prog bands who want to make "Fragile By The Pound", and it might seem a tad hypocritical of me to shout this band's praises as I have been doing, for they are just as unashamedly nostalgic as any Yenesis wannabee you care to mention, but you see, the thing is, bands that wish to be stuck nine feet underground in early 70s Canterbury while dreaming of toking with Crosby and Nash in Laurel Canyon are, perhaps thankfully - I wouldn't want this album to be the start of a trend - a damn sight rarer and therefore far easier to enjoy. I like this album a lot. It seems everything in Sogmore's Garden is rosy. While there are melody lines here, riffs there that have you thinking you're sure you've heard that before, in the fullness of time it matters not a jot, just get on the Magic Bus and enjoy the trip. You pay your fare in bananas, 'cos they got no bones :-)