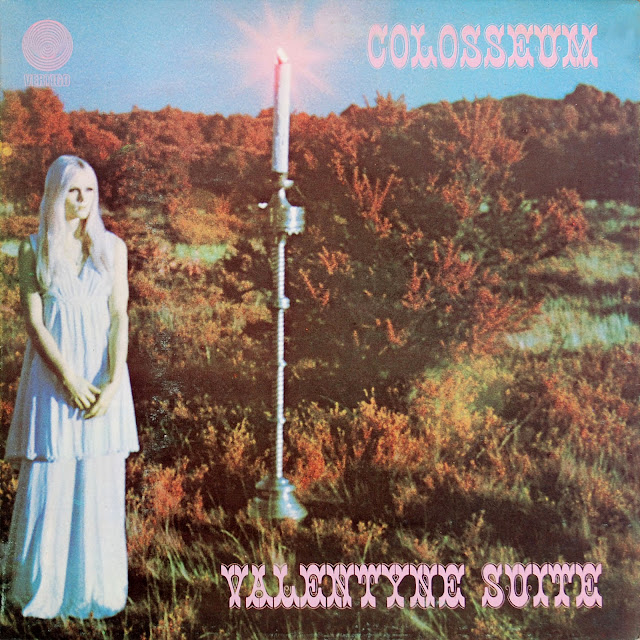 Colosseum, one of the first bands to fuse jazz, rock & blues were formed in Spring 1968 by drummer Jon Hiseman with tenor sax player Dick Heckstall-Smith, who had previously worked together in the New Jazz Orchestra and in The Graham Bond Organisation, where Hiseman had replaced Ginger Baker in 1966. They met up again early in 1968 when they both played in John Mayall's Bluesbreakers, during which time they played on the Bare Wires album. Childhood friend Dave Greenslade was quickly recruited on organ, as was bass player Tony Reeves who had also known both Jon and Dave since being teenage musicians in South East London. The band's line-up was completed, after lengthy auditions, by Jim Roche on guitar and James Litherland (guitar & vocals), although Roche only recorded one track before departing.

The band made their live debut at the Scene Club, Scarborough and were promptly recorded by influential BBC Radio 1 DJ John Peel for his Top Gear Radio program. This appearance gained them valuable exposure and critical acclaim. Their first album, "Those Who Are About to Die Salute You", which opened with the Bond composition "Walkin' in the Park", was released by the Philips' Fontana label in early 1969. In March the same year they were invited to take part in Supershow, a two-day filmed jam session, along with Modern Jazz Quartet, Led Zeppelin, Jack Bruce, Roland Kirk Quartet, Eric Clapton, Stephen Stills, and Juicy Lucy.

Colosseum's second album, later in 1969, was "Valentyne Suite", notable as the first release on Philip's newly launched Vertigo label, established to sign and develop artists that did not fit the main Philips' brand, and the first label to sign heavy metal pioneers Black Sabbath. For the third album, "The Grass Is Greener", released only in the United States in 1970, Dave "Clem" Clempson replaced James Litherland. Louis Cennamo then briefly replaced Tony Reeves on bass, but was replaced in turn by Mark Clarke within a month. Then Hiseman recruited vocalist Chris Farlowe to enable Clempson to concentrate on guitar. This lineup had already partly recorded the 1970 album "Daughter of Time". In March 1971, the band recorded concerts at the Big Apple Club in Brighton and at Manchester University. Hiseman was impressed with the atmosphere at the Manchester show, and the band returned five days later for a free concert that was also recorded. The recordings were released as a live double album Colosseum Live in 1971. In October 1971 the original band broke up.

After the band split, Jon Hiseman formed Tempest with bassist Mark Clarke; Dave Greenslade formed Greenslade together with Tony Reeves. Chris Farlowe joined Atomic Rooster; and Dick Heckstall-Smith embarked on a solo career. Clem Clempson joined the hit group Humble Pie. Hiseman formed a totally other group called Colosseum II in 1975, with a stronger orientation towards jazz-fusion rock, which featured the well-known guitarist Gary Moore and Don Airey on keyboards. They released three albums before disbanding in 1978. Remarkably, Colosseum reunited 23 years later (1994) with exactly the same line-up as when they split in 1971.

Colosseum reunited on 24 June 1994 at the Freiburg Zelt Musik Festival, then, a few months later, they played a concert in Cologne on 28 October at E-Werk which was recorded for a TV Special and later released in 1995 as a CD and video. It was then re-released in 2004 as a DVD. The rejuvenated band then played a lengthy tour of mainly German concerts. A second tour followed in 1997, to promote their new studio album "Bread and Circuses". They also appeared at major festivals in 1998, 1999 and 2000. In 2003 they toured on the back of "Tomorrow's Blues" CD, followed also by gigs in England in 2004. Hiseman's wife, saxophonist Barbara Thompson, joined the band on various occasions before the death of Dick Heckstall-Smith in December 2004, before becoming a permanent member of the band. In 2005, there were three memorial concerts for Dick Heckstall-Smith, one in Hamburg Germany and two in England. Then on 24 September 2005 they performed in Moscow, followed by more concerts in 2006. In 2007, the made their first appearance in Japan and returned to play more dates in Germany. Further tours of Europe were made in 2010.

In October 2010, Jon Hiseman's biography, Playing the Band - The Musical Life of Jon Hiseman, was published. In November 2012, a Kindle version (with minor re-edits) of Playing the Band was published. Colosseum played their "Summer 2011" tour of 22 gigs in Germany, Italy, Austria, Finland and Poland. The tour started in June and ended on 20 August in Germany, Rostock, at Bad Doberan "Zappanale" festival. According to the interview of the bandleader Jon Hiseman, Bad Doberan was the last concert of the band. Their second 'last' concert was in Poland, Slupsk, at "Legends of Rock" festival on 13 August 2011 and the third 'last' concert in Finland, Äänekoski, at "Keitelejazz" festival on the 23 July 2011. These announcements were based on Barbara's worsening Parkinson's condition preventing her from playing. However, with the arrival of new medication, her ability to play was renewed, so those announcements proved to be premature and the band continued to record and play until 2015.

More studio releases followed, as expanded editions of "Valentyne Suite" and "Colosseum Live", and several compilation sets of earlier work. From 2011 to 2014, Colosseum gradually recorded their final album, titled "Time on our Side", which was eventually released late in 2014, to coincide with their final flurry of dates in Germany and the UK. These included 24 concerts during 2014 in Central Europe, starting 2014-10-23 at Steinegg Festival, Collepietra, Italy. followed by concerts in February 2015 before finally ending on 2015-02-28 at the Shepherd's Bush Empire, London W12. At all these concerts, Jon Hiseman confirmed from the stage that this tour would be Colosseum's last. So, after 23 years, the band played what Jon referred to as 'the last hurrah!' before a packed and very appreciative audience at the Shepherd's Bush Empire, London on 28 February 2015. Special 'guest' was Ana Gracey, the daughter of Jon Hiseman and Barbara Thompson, who sang her own composition, "Blues to Music", with Chris Farlowe, which was also included on the final Colosseum CD.