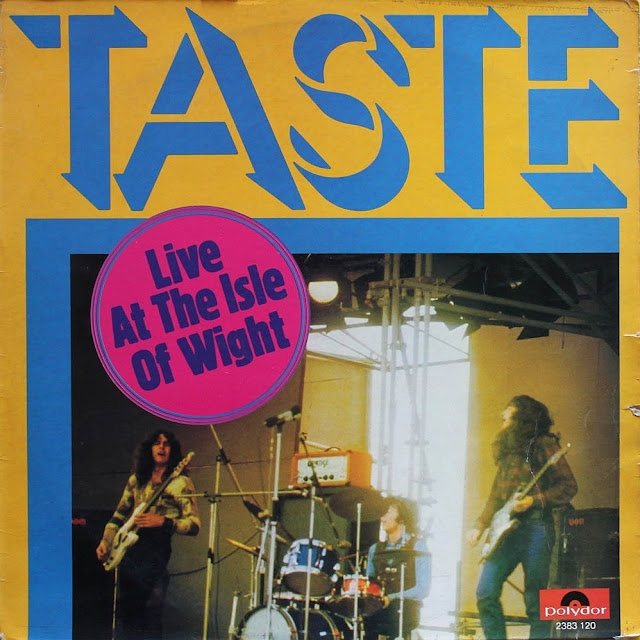 The 1970 Isle Of Wight festival is remembered for several reasons: it would prove to be the largest rock festival yet held - attracting, it is estimated, up to 600,000 people and so leading to a ban on music festivals on the IOW for the next 32 years. While a ticketed festival, the huge numbers of people heading to the island meant it quickly became a free festival (with much rhetoric being spouted alongside several stage invasions by self-proclaimed "hippie activists"). Alongside leading rock, soul and |azz musicians the IOW hosted what would turn out to be the final UK performances of both Jimi Hendrix and The Doors. The IOW also featured a particularly ferocious set by Taste.

Taste were formed in the city of Cork. Ireland, by 18-year old Rory Gallagher in 1966. By then Gallagher was a veteran of the showband circuit, had toured much of Europe and played a residency in Hamburg. With Taste he mixed original material with blues covers, the band's raw, dynamic sound quickly establishing them In Belfast then London. Just before Taste signed with Polydor Records the band's management insisted on replacing the Cork rhythm section with drummer John Wilson and bassist Richard McCracken, both veteran Belfast musicians (Wilson had played in Them). Taste's exciting live performances set attendance records at London's Marquee Club and they gained wide European popularity with their eponymous 1969 debut album.

1970 should have been Taste's year: they released their sophomore album "On The Boards" on January 1st. 1970, to rave reviews across Europe and the US. The band's work effort and inspired live performances had established Taste truly as a "people's" band. Praise for the band - and, especially, Rory Gallagher - came from many noted musicians: John Lennon championed Taste while Jimi Hendrix, when asked how it felt to be the world's greatest guitarist, replied that he had no idea and the question should be redirected to Rory. Yet, internally. Taste were bitterly divided due to differences between Gallagher and the rhythm section over management, money and status.

A break-in to the band's van (only drum pedals were stolen) the night before they headed to IOW brought tensions to a head with Rory emphasising that if management had provided Taste with a superior vehicle (as long requested) the theft wouldn't have occurred. If tensions were simmering in the van the Southampton ferry crossing on Friday morning provided a sense of exhilaration - they could feel the excitement building as thousands of rock fans gathered for the festival. Unfortunately, the huge numbers of people arriving on the IOW (population 100,000) meant Taste struggled to get on site in time for their late afternoon set. Things only got worse once there as they became aware the festival was being filmed: their manager threatened to cancel Taste's performance.

But perform they did: taking the stage in perfect conditions. Taste tore into 'What's Going On'. The huge audience, until then somewhat subdued in response to the afternoon's bands, rose to their feet. The ten thousand hours Kory had put in playing live over the past six years ignited a truly explosive performance. Perhaps the inter-band tension also fuelled Taste as the trio played superbly, giving their absolute all. each member listening and responding so creating music alive with excitement and possibility. Electricity was in the air and the audience screamed for an encore. Taste obliged but the audience refused to let them go. One - two - three - encores! Right then everyone bearing witness agreed: Taste were the most exciting live band in the world.

Backstage Taste were charged with adrenalin and aware they had achieved something special. This is what it's all about - playing rock and roll like your very life depended on it! But the ill feeling remained and. when photographer John Minihan requested that Taste gather for a portrait, the trio were reluctant. Finally, bassist McCracken said, "come on guys, even if it is the last one" and grabbed Gallagher and Wilson for the photo. Photo taken, Rory and his brother Donal then went off to watch Tony Joe White play. Rory was so impressed he would later include White's "As The Crow Flies" in his live set. Taste might have had the adulation of an adoring public ringing in their ears but their IOW performance did not heal the band's divisions and they would confirm that they were to split a few days later. As Taste were contractually committed to a European tour they continued until a final Belfast concert on New Year's Eve, 1970. In that tumultuous year their Isle Of Wight performance sealed Taste as more a legend than a band.