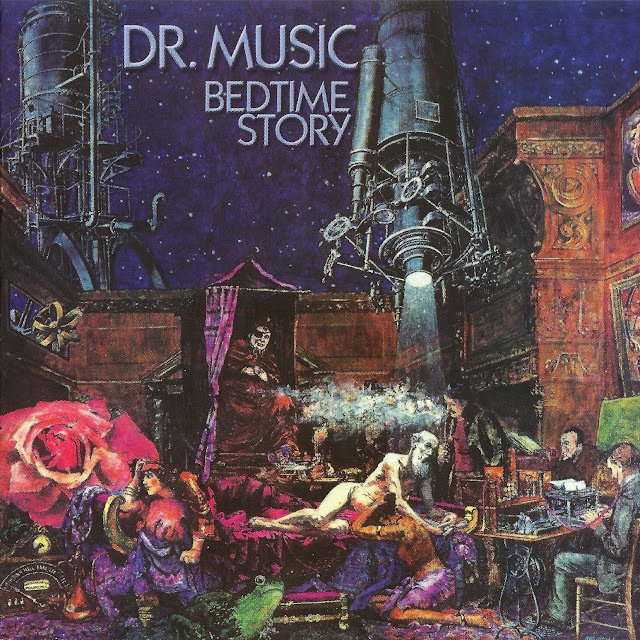 Dr Music was the brainchild of Toronto native and Doug Riley, who first took piano lessons as a child as a means of coping through polio. Born in Toronto in 1945, he took lessons in classical piano at the Royal Conservatory of Music in Toronto beginning at the age of four. Later, in Montreal, he studied pipe organ with Harry Duckworth at St. Anne de Belleville Church, and piano with Paul DeMarky, Oscar Peterson's piano teacher, and eventually developed into one of the country's most up and coming arrangers. He went on to earn a Bachelor of Music in composition from the University of Toronto, while playing R&B with the Silhouettes, appearing at the Blue Note and the other Toronto nightclubs of the day. and turned down an offer to join Ray Charles' band after working on his 1969 album, "Doing His Thing". He was working as the Music Director for a number of TV shows, when in 1969 Ray Stevens ("Guitarzan," "Ahab The Arab") came calling. CTV had given him his own show, and Riley, dubbed 'Dr Music,' was recruited to put together a band.

Several members came and went at first, but following the cancellation of the show after the 1970 season, Riley kept the core of the group in tact and began touring the local area jazz clubs. The actual band was rounded out with Doug Mallory on vocals and guitar, bassist Don Thompson, vocalist Diane Brooks, and the Kennedy brothers - Michael on vocals and percussion and ex-Motherlode member Steve leading the horns section that also included Gary Morgan, Keith Jollimore, and Barrie Tallman. RCA Records approached Riley later that year for a Coca-Cola jingle they were releasing, and so they recorded one of two versions of the new theme song, a cover of The New Seekers' "I'd Like To Teach The World To Sing", with the Laurie Bower Singers doing the other. It was released internationally as a single, gaining both groups some overseas notoriety.

Riley had also just opened up Toronto Sound Recording Studio with producer and engineer Terry Brown (Klaatu, Rush, etc), where they mostly did jingle work. This connection came in handy when looking for a label, as GRT Records was fledgling, and Riley signed a deal with them the following spring, knowing studio time was obviously going to be available. During this period, he also manned the helm for some other GRT projects, including the sole album from Everyday People, and his own debut album, "Foxey Lady". With a cast of session players including singers Laurel Ward, Brenda Gordon, Trudy Desmond, Rhonda Silver, and Terry Black (who was also featured on "Foxey Lady", Dr Music's eponymous debut album was in the stores later that year. Three singles hit the airwaves before year's end - "Try A Little Harder", Neil Sedaka's "One More Mountain To Climb" and "Gospel Rock". The last Single's b-side, "Sun Goes By" was released as its own single the following spring. But following some select shows around the Toronto and Detroit regions, Riley disbanded this version of the group so he could focus on the studio.

But by the end of 1972, Riley had resurrected a new version of the group that included Mallory, the Kennedys, Jollimore, and Tallman, along with new drummer Wayne Stone. After some live dates across the country, they went into the studio the first couple of months of the new year, and released their sophomore album that summer, "Dr. Music II". "Long Time Comin' Home" b/w the unreleased "Stay Real" and "Tryin' Times" were released as singles, following in Riley's tradition of finding a common ground between sophisticated jazz arrangements and a pop attitude that got decent airplay. Other noteable cuts included the Robbie Robertson-penned "Where Do We Go From Here" and Steve Kennedy's "6 - 5". The TV bug bit Riley again, and he worked for the CBC on Keith Hampshire's new program, "Music Machine." That run lasted two seasons, but before the final curtain was dropped in 1974, Riley had already reformed Dr Music, which was working as the show's house band.

By that summer, they released their third album, "Bedtime Story". The new supporting cast had Mallory, Steve Kennedy, Jollimore, and Tallman returning, and new to the lineup were drummers Claude Ranger and Dave Brown, Don Thompson on bass, and trumpet and horns player Bruce Cassidy. The album was generally more progressive than his previous outings, with a heavier guitar-oriented sound. The songs were longer, and more complex, and the title track (written by Herbie Hancock) b/w the lead-off "I Keep It Hid" became the only single, but didn't fare as well on the charts or in airplay that was expected. So following some dates around the Toronto area, Riley once again disbanded the group so he could concentrate on producing and engineering other artists.