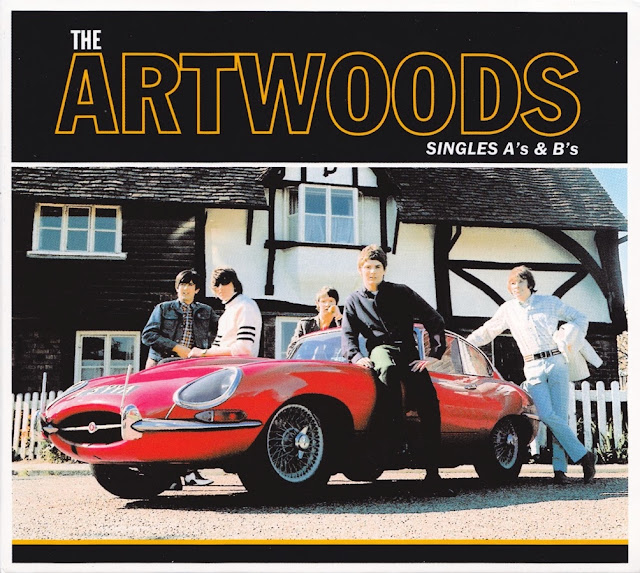 The Artwoods were formed in 1963, and over the next two years became an extremely popular live attraction, rivaling groups such as the Animals, although, despite releasing a clutch of singles and an album, their record sales never reflected this popularity. Singer Arthur Wood, from whom the band took their name, was the elder brother of The Rolling Stones' Ronnie Wood. He had been a vocalist with Alexis Korner's Blues Incorporated for a short period during 1962, simultaneously fronting his own group, the Art Wood Combo. When keyboardist Jon Lord and guitarist Derek Griffiths joined from Red Bludd's Bluesicians they re-christened themselves the Artwoods. Keef Hartley, formerly with Rory Storm & The Hurricanes, joined on drums in '64 and the band turned professional, secured a residency at London's 100 Club and gained a recording contract with Decca Records.

The intended debut single, a cover of Muddy Waters' "Hoochie Coochie Man" was shelved in favour of a version of an old Leadbelly song, Sweet Mary". Although it didn't reach the Charts it got sufficient airplay to bring them a lot of live work, including an appearance on the first live edition of 'Ready, Steady, Go!' The second record, "Oh My Love", was another blues cover. Like it's predecessor, and subsequent releases, it failed to chart. The Artwoods were dropped by Decca at the end of 1966 and signed a one record deal with Parlophone, but "What Shall I Do" also flopped. Later in 1967 a final "one-off" single appeared on Fontana under the name "St. Valentine's Day Massacre" but by the time of it's release the Artwoods had effectively ceased to exist.

The Artwoods' early records today stand up well against the work of more successful groups such as the Stones, the Yardbirds or ironically, the Birds, who included Art's younger brother Ron. But at the time they came out, despite appearances on programs like Ready, Steady, Go! their singles never seemed to connect with the record-buying public. In live performance, on the other hand, it was a different matter. They had a virtuoso lineup, Lord'spiano and organ sound was a great complement to Wood's singing, Griffith's guitar work was tastefully flashy, and Keef Hartley was animated as well as powerful, with a big sound on the drums. Club audiences always knew they were good for a great show and the band loved playing live. Ultimately, in fact, the group's success in touring and their love of playing live may have hurt them.

The 18 songs on this release, comprising the group's entire single and EP output, are some of the best British-spawned R&B of their time, and can stand alongside the best work of the Animals, Manfred Mann, or the Yardbirds in that vein. The Artwoods were a virtuoso outfit from the get-go, with a natural feel for the music as singers and players, whether they were working in the vein of Sam and Dave or Booker T. and the MG's, or just having fun in the studio as they do on several of the B-sides represented here. They were good at improvising in the studio and had a slightly more jazzy feel to their playing than a lot of their rivals -- their records are amazingly busy, between Jon Lord's piano and organ flourishes, Keef Hartley's very flashy drumming, and Malcolm Pool's extremely active bass work; what's more, on their B-sides, it's possible to hear the very beginnings of what became progressive rock in the hands of outfits like the Nice, at a point when the virtuosity was still focused on R&B and soul. Even their cover of "Brother Can You Spare a Dime" works within the context of British R&B.

The Artwoods treaded a fine line between Manfred Mann and Georgie Fame & the Blue Flames, but they really sounded like no one else. There's not a bad cut here, even the trio of pop-rock covers ("A Taste of Honey," "Our Man Flint," etc.) that they hesitated to release at the time for fear of looking like they were selling out. The mastering is excellent, and if this were an LP, it's the sort of release purchasers would need more than one of because they'd wear out their first copies.