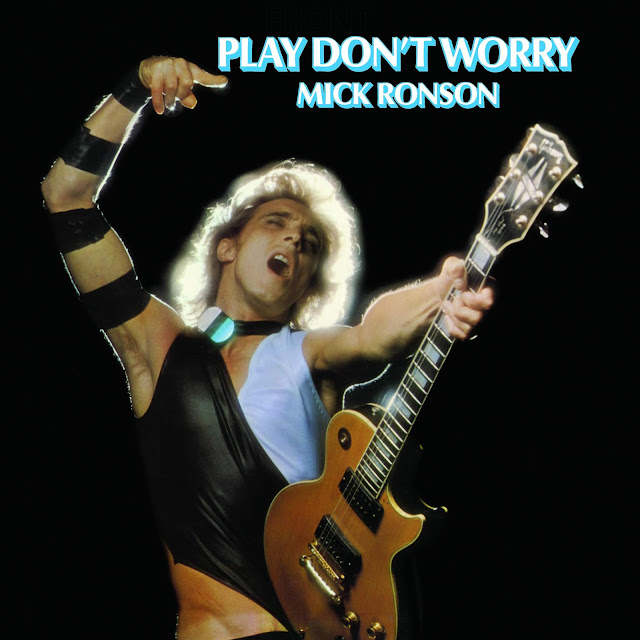 With his striking glam-blond locks and befitting Bowie feather-cut, sideman guitarist Mick Ronson (born Michael Ronson, 26th May 1946 in Hull, England) had his own fair share of female - and for that matter, male - admirers. The Bowie connection took up a good deal of Mick’s prime-time in the early 70s as he and the Spiders From Mars weaved their magic on the main man’s classic-rock sets including "The Man Who Sold The World", "Hunky Dory", "The Rise And Fall Of Ziggy Stardust" and "Aladdin Sane"; his last contributions were on covers set "Pin Ups" in 1973. Mick Ronson first came on to the scene in late ‘66, when garage-rock outfit The Rats invited him into their revolving-door set up. They were already a couple of singles into their career before Mick boosted their ranks, but the band did record a number of unreleased demos and rarities from 1967 to their break-up in ’69 before thay crept back into their proverbial sewer; check out the psychedelic "The Rise And Fall Of Bernie Gripplestone" on a subsequent and posthumous collection.

Ronson subsequently went into session work, notably for rising folk-rock star Michael Chapman on his "Fully Qualified Survivor" (1969) album, before his initial association with David Bowie under the group name, Hype. Moonlighting from Bowie and making his one and only prog-rock attempt as Ronno (with bassist and producer Tony Visconti and ex-Rats Bernie Marshall and Woody Woodmansey), the single "4th Hour Of My Sleep", released on the now legendary Vertigo Swirl label, failed to capture an audience. Alongside aforementioned drummer Woody Woodmansey and bassist Trevor Bolder, Bowie completed his Spiders From Mars alumni, named so after his 1972 album "The Rise And Fall Of Ziggy Stardust & The Spiders From Mars". Mick’s flamboyant space-age guitar licks were the rock life-force to many classic David Bowie tracks; "The Jean Genie", "Moonage Daydream" et al. His work with Bowie extended beyond the boundaries of the band as both took a hand in producing Lou Reed’s remarkable comeback classic "Transformer" (1972), while his association with Mott The Hoople man Ian Hunter began as arranger of their massive breakthrough hit of the Bowie-penned "All The Young Dudes".

When David Bowie dissolved the Spiders in ‘73, Ronson was left with no choice but to try his hand at a solo career. Retained by Tony DeFries at MainMan productions and RCA Records, Mick issued his debut album "Slaughter On 10th Avenue" (1974). Employing the services of current and former Bowie affiliates through Aynsley Dunbar (drums), Trevor Bolder (bass and brass) and Mike Garson (keyboards), the record displayed an eclectic range of musical excursions, none more so exotic than the Richard Rodgers movie-themed title track. Both outlandish and subtle in equal measures, Ronson went from versions of Annette Peacocks’s "I’m The One" and Elvis’s "Love Me Tender" to Bowie collaborations, "Growing Up And I’m Fine", "Music Is Lethal" and medley piece "Pleasure Man – Hey Ma Get Papa"; the latter was a joint effort with SRC man Scott Richardson, who, without Bowie augmented Ronson on the set’s stand-out cut, "Only After Dark".

A short stint as a member of Mott The Hoople ("Saturday Gigs" was his only spot), was cast aside as Ronson completed his second studio set, "Play Don't Worry" (1975). Another heady mix'n'match glam pop rock diversion for the guitarist, the album was certainly not an improvement, rather a hotchpotch of half-hearted attempts at covers from the likes of Pure Prairie League’s "Angel No.9", Laurie Heath/The Seekers "This Is For You", Bobby Troup’s "Girl Can’t Help It", and The Velvet Underground’s "White Light / White Heat" and Adam Taylor’s "Woman" - "Billy Porter" was the failed pop single, while its B-side was another Annette Peacock song called "Seven Days". Mick’s subsequent work included stints with Bob Dylan on his Rolling Thunder Revue (where he met Roger McGuinn; he later produced "Cardiff Rose"), session time with David Cassidy and Roger Daltrey respectively and other stints with John Cougar Mellencamp ("Chestnut Street Incident"), The Rich Kids ("Ghosts Of Princes In Towers") and David Johansen ("In Style"). The 80s hadn’t been kind to Ronson as only with Mellencamp again (the single "Jack And Diane") and ex-goth Andi Sex Gang on "Arco Valley" were of note; he produced The Payolas and Los Illegals.

Ian Hunter, who Mick had also toured alongside, formed a partnership with him as the Hunter Ronson Band. For the next decade and a half Mick Ronson was his guitarist; a dual album "Yui Orta" was finally being issued in 1990. Returning again in 1992, Mick produced Morrissey’s "Your Arsenal" album, and guesting alongside old mates David Bowie and Ian Hunter at Freddie Mercury’s Wembley Tribute Concert that April. It was rumoured at the time that Mick was suffering from liver cancer, and this proved true as he was to die on the 29th of April 1993. Fast forward a year and the release of his long-awaited third and final album, "From Heaven To Hull" (1994); a portion of the sales revenue was donated to the T.J. Martell cancer foundation. Featuring Bob Dylan’s "Like A Rolling Stone", Bowie’s "All The Young Dudes" (live from the Freddie tribute), Giorgio Moroder’s "Midnight Love" and a Joe Elliott (of Def Leppard) minor hit "Don’t Look Down", it was a passionate release as friends such as Cchrissie Hynde, Peter Noone and Ian Hunter made worthy contributions in the studio. All in all the record was a fitting swan song for one of rock music’s best loved, sometimes understated and most missed musicians.

Of his posthumous releases, "Indian Summer" (2001) was his most interesting. Mostly instrumental and written and recorded entirely by Mick Ronson in the early 80s, it was to have been utilised for a soundtrack, although the film itself was never released; the opening title track was a powerful piece, while "China" was a romanticised ballad.