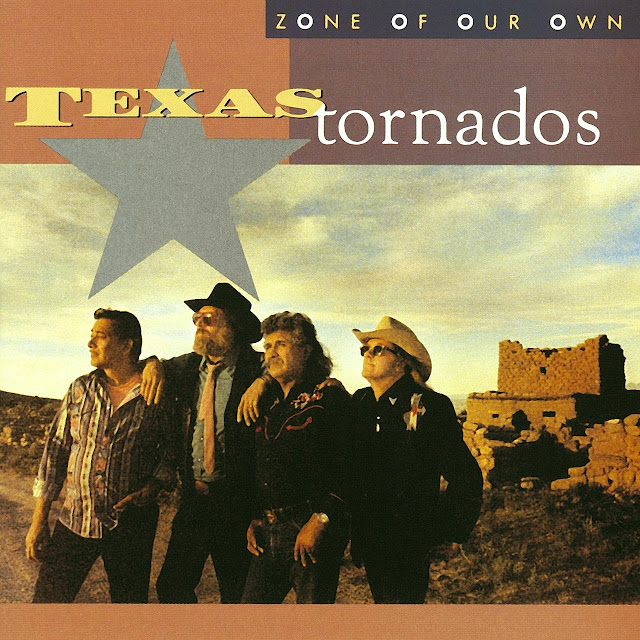 The ultimate Tex-Mex supergroup Texas Tornados were composed of some of the genre's most legendary figures: Doug Sahm, Augie Meyers (Sahm's bandmate in the groundbreaking Sir Douglas Quintet), Hispanic country star Freddy Fender, and accordion virtuoso Flaco Jimenez. The group's infectious, party-ready sound blended Country, early Rock'n'Roll, Mexican Folk Music, Rhythm'n'Blues, Blues, and whatever other roots musics crossed their paths. The Texas Tornados first assembled in 1989 at a concert in San Francisco, billing themselves as the Tex-Mex Revue. They enjoyed the collaboration so much they decided to stick with it and generated far more publicity together than they would have solo; Jimenez had released several acclaimed albums by that point, but Sahm had recorded only sporadically during the '80s, and Fender hardly at all. Their selftitled debut album was released on Reprise Records in 1990, in both English and Spanish versions, to rapturous reviews and also sold pretty well, reaching number 25 on the country charts. The group toured extensively behind it and issued the Grammy-nominated follow-up album "Zone Of Our Own" in 1991, again to hugely positive reviews.

The initial combination of Flaco Jiménez, Augie Meyers, and Doug Sahm performed in front of a San Francisco audience, they all knew the genuine bond they felt in their music could probably be taken to another level. After they initially performed as the Tex-Mex Revue, they took the title Texas Tornados, after Sahm's song "Texas Tornado", from the album of the same name. Another account of the group's birth says they formed when record company executives looking to cash in on regional music sales approached Sahm and Meyers around 1990, and they brought in longtime friends and collaborators Fender and Jiménez. Sahm had released albums under the name Texas Tornados as early as the 1970s, some featuring Fender or Meyers. Jiménez and Meyers played on Sahm's Atlantic Records debut in 1971. As Fender once said, "You've heard of New Kids on the Block? We're the Old Guys in the Street." Individually, this quartet has had major success:

Freddy Fender was a cross-over success story around the world, with hits like "Before the Next Teardrop Falls" and "Wasted Days and Wasted Nights". Flaco Jiménez has played with acts ranging from the Rolling Stones to Dwight Yoakam. He also is known as the "Father of Conjunto Music" (he plays the Conjunto accordion). Augie Meyers has shared the stage with the likes of the Allman Brothers Band and Bob Dylan. He is also a member of the Texas Music Hall of Fame. Doug Sahm and Augie Meyers were both members of the 1960s pop-rock band the Sir Douglas Quintet, with hits such as "She's About a Mover" and "Mendocino" to their credit. Meyers's signature sound on the Vox organ was a prominent feature of the band's sound. Sahm, Meyers, and Jiménez are from the San Antonio area.

The band's 1990 debut was recorded in both English and Spanish versions. The Texas Tornados were asked to perform all over the world, such as at the presidential inauguration of Bill Clinton and the Montreux Jazz Festival, and made regular appearances at Farm Aid and the Houston Livestock and Rodeo Show. They won a Grammy award in 1990 for Best Mexican/American Performance. Their 1996 single "A Little Bit Is Better Than Nada" accompanied the opening credits of the golf movie Tin Cup, which was released the same year, and is included in the official soundtrack. Among their other albums is "Live From the Limo", the last album to be recorded with the original lineup, as Sahm died in 1999, the year of its release. Fender, who had health problems in later years, died in 2006. Their 2005 "Live from Austin" album was a recording of a 1990 performance on the TV series Austin City Limits. People sometimes refer to their lyrics as Spanglish because of the mixture of English and Spanish in the same song, in addition to pronouncing the Spanish lyrics in an American accent, which is evident in their hit, "(Hey Baby) Que Paso". An example is the lyric "Don't you know I love you, and my corazón is real?", in which the word corazón (Spanish for "heart") is improperly pronounced, with an obvious American accent. The band's self-titled debut album was offered in Spanish and English-language versions.

Augie Meyers and Flaco Jiménez reunited with the son of Doug Sahm, Shawn Sahm, in a new recording that includes five previously unreleased vocal performances from the legendary Freddy Fender. The collection, entitled "Está Bueno", includes new songs written by Fender, such as the swamp pop ballad "If I Could Only", an instant new Tornados-style classic written by Doug and Shawn Sahm, "Who’s to Blame, Señorita ?" and several Augie Meyers songs recorded for the first time by the Tornados, such as "Velma from Selma" and "My Sugar Blue". The album was produced by Shawn Sahm and was released nationally by Ray Benson's Bismeaux Records on March 2, 2010. Playing together again for the first time since the ‘90s and feeling what Shawn calls The Tornado vibe, the group enlisted Shawn to take over and drive the bus for their first album in over a decade. His goal for the record was to keep it a straight up Tex-Mex rock and roll record. When they first began recording, Shawn was very pleased but not surprised to hear them sounding like they are playing at the top of their game. He stated: "When you hear this record, you hear why they are the legends they are".

Shawn Sahm has been around the music industry since he was 13 and was the perfect person to entrust with preserving the Tornados' legacy. He fine-tuned each track according to the group’s feedback, giving each detail serious attention. Throughout the process, he insisted to all of them, “It is not done until you are happy.” For the release of the album, Benson’s Bismeaux Records, in Austin, was an obvious choice. Shawn Sahm commented, "Everyone knew they had a great record and they felt it would be important to go with someone who understood the legacy of the Texas Tornados. I knew Ray was the right guy. They have been friends for a long time. If anyone understood the legacy of the band, it was Ray". "Having known the original Texas Tornados, I was delighted when Shawn brought me the tracks of the new Texas Tornados CD", said Benson. "Besides the wonderful Freddy Fender songs recorded shortly before his passing, Augie, Flaco and Shawn have recorded an album true to the Tornados sound and vision. I am honored to present their CD on Bismeaux Records for old fans and I am sure a host of new ones, too". In addition to the featured members, the recordings include Tornado original musicians Louie Ortega, Speedy Sparks, and Ernie Durawa. Flaco Jiménez stated: "The groove is back".

Even if the Texas Tornados had picked a different name, it would be pretty hard to imagine them coming from anywhere besides the Lone Star State; their high-spirited mixture of Tex-Mex, norteño, garage rock, blues, and hardcore honky tonk flavors brands them as proud sons of a place all these sounds and more happily co-exist on a regular basis. "Zone Of Our Own", the second album from the all-star quartet of Freddy Fender, Flaco Jimenez, Augie Meyers, and Doug Sahm, isn't quite up to the same level as their superb self-titled debut, but it sure doesn't miss by much. Sahm gets to rave up on Sir Doug-style rockers like "I Ain't That Kat Anymore," Fender sings sad and soulful on "Oh Holy One," Jimenez burns up the squeeze box on "La Mucura," and Meyers gets to show off his bluesy side on "Did I Tell You." For all the sonic diversity of the Texas Tornados, "Zone Of Our Own" still sounds like it's all of a piece, like the play list of some blessedly eclectic radio station beaming out along the border, as the four frontmen bounce off each other with joyous aplomb. If you're looking for some aural seasoning for your next barbecue, "Zone Of Our Own" is just the bottle of hot sauce you need.

By the time of 1992's "Hangin' On By A Thread", the group's primary audience was Latino, and Jimenez accordingly took more and more of the spotlight. After more touring, the group went their separate ways to concentrate on other projects and work on new material; most notably, Sahm and Meyers formed a new version of the Sir Douglas Quintet. In the meantime, Reprise issued a compilation, "The Best Of Texas Tornados". The Tornados reconvened in 1996 for the album "4 Aces", which didn't attract quite as much attention or acclaim as their previous work. The group's late-1998 concert at Antone's in Austin was recorded and released the following summer as "Live From the Limo Vol. 1"; unfortunately, it would prove to be the only volume, as Doug Sahm died of a heart attack in late 1999.