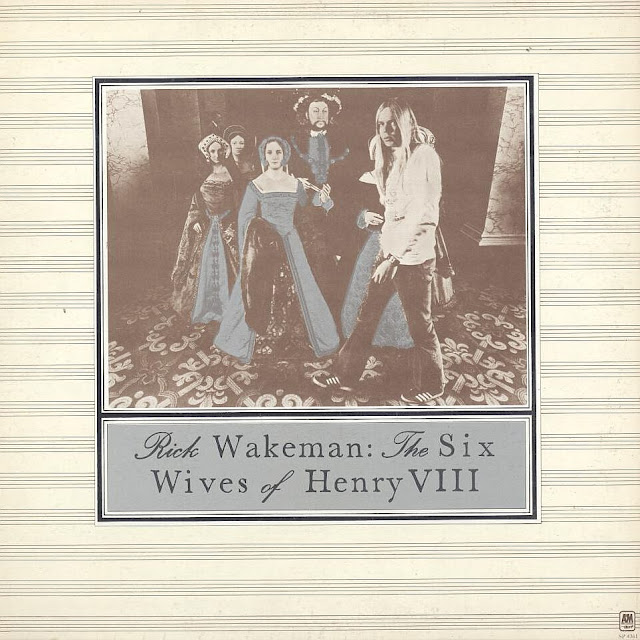 In early 1972, Yes were touring America to promote their fourth studio album "Fragile". On a stopover  in Richmond, Virginia, Rick Wakeman, who had joined Yes in August 1971, and made his debut on "Fragile", was perusing the airport bookshop. Eventually, Rick bought four books, including Nancy Brysson Morrison’s The Private Life Of Henry VIII. On the subsequent flight from Richmond to Chicago, Rick began reading Private Life Of Henry VIII. As he began reading about Anne Boleyn, Rick remembered a recording he had made in 1971. Since then, Rick had done nothing with that piece of music. After recording the music, Rick had been struggling to come up with lyrics to accompany it. This being the age of the concept album, what Rick was looking for, was a theme that could run through the recording. Not any more. Suddenly, everything came together. The notes Rick made about Anne Boleyn on the flight to Chicago were just the start. Over the next few weeks and months, whether at home or on tour, Rick focused on each of Henry VII’s six wives. At his piano, he continued to make notes. Eventually, Rick’s notes became the thread that ran through his sophomore album, "The Six Wives Of Henry VIII", which was recently reissued by Commercial Marketing as a double album.

Prior to the release of "The Six Wives Of Henry VIII" in January 1973, Rick Wakeman had only released one solo album, 1971s "Piano Vibrations". However, controversy surrounds "Piano Vibrations". Rick doesn’t even consider "Piano Vibrations" as part of his discography. Rick’s involvement was minimal. He neither wrote, nor chose the material on "Piano Vibrations". Eight of the ten tracks were cover versions of popular songs, and the two other tracks were cowritten by producer, John Schroeder. All Rick who was working as a session musician, had to do, was turn up and play piano. The result was what is best described as a cheesy sounding album, that failed to chart. This was the polar opposite to Rick’s sophomore album "The Six Wives Of Henry VIII". Having joined Yes in August 1971, Rick played on their fourth album, "Fragile". It was released on 29th November 1972 in Britain, reaching number seven. This resulted in "Fragile" being certified silver. Across the Atlantic, Fragile was released on 4th January 1973, and reached number four in the US Billboard 200. "Fragile" was certified double platinum, and became the most successful album of Yes’ career. This would also be the case with Rick’s sophomore album, "The Six Wives Of Henry VIII".

In the space of three minutes and forty-six seconds, Rick manages breath life, meaning and emotion into the story of Henry VIII and Catherine’s marriage. To do this, he uses a wide palette of instruments. This includes piano, synths, a rhythm section and harmonies. They’re Rick’s musical palette, played by what were some of the most talented, and sought after musicians and backing vocalists of the early seventies. What follows is a heart wrenching portrayal of a doomed marriage, which promised much, but sadly, was sabotaged by obsession. As "Catherine Of Aragon" unfolds, Henry VIII and Catherine’s marriage is young, and there’s a sense of hope and joy. Henry VIII hopes for a son and heir. As time passes, this becomes more unlikely. The one thing he longs for, he can’t have, a son. Despite his wife giving birth to a daughter, Henry VIII becomes melancholy and maudlin. This is reflected in the music. Soon, the melancholia leads to drama and sadness. The understated arrangement veers between wistful and ethereal. It translates what Henry VIII and Catherine must have been feeling. Later, as the music becomes dark and dramatic, Catherine is asked to leave the court, her eighteen year marriage at an end. In just under four minutes, you experience despair, drama, heartache, hope, joy, melancholy, pain and sadness. You find yourself empathising and sympathising, mostly, with Catherine. Her marriage had been ruined, ruined by her husband’s obsession for a son and heir. This heart wrenching, cinematic tale is just the start of what is, without doubt, an innovative, influential and ambitious concept album.