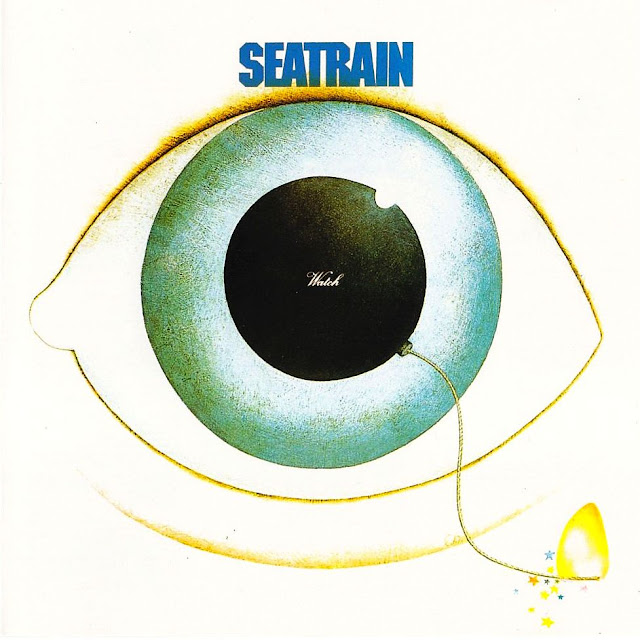 Seatrain was an American roots fusion band based initially in Marin County, California (and later in Marblehead, Massachusetts) and was formed in 1969. They played a mixture of rock, country, blues, folk and jazz and had a highly distinctive sound not dissimilar to that of The Band, Little Feat, Grateful Dead and It's A Beautiful Day. Eclecticism was their calling card, and Seatrain notched up both hit singles and albums (two of them produced by Beatles producer George Martin) and garnered a cult following before call in it a day in 1973. Seatrain's origin, however, lay in one of the most important American roots bands of the early 1960s - the Blues Project. Although calling themselves a blues band, they were not "pure blues" per se and while it was a pivotal aspect to their sound and approach, they didn't dwell on one specific type of blues music only. Unlike their contemporaries The Paul Butterfield Blues Band and the Jim Kweskin Blues Band (who delved into Chicago blues and ragtime respectively) they, like The Yardbirds, introduced a wider span of musical influences drawing on folk, classical, jazz and baroque strains to produce a music both exciting and unpredictable.

Drummer Roy Blumenfeld and flutist/bassist Andy Kulberg formed Sea Train in August 1968. They relocated to Marin County, CA, recruiting a new line up of vocalist/lyricist Jim Roberts, ex-Mystery Trend guitarist John Gregory, former Jim Kweskin Jug Band violinist Richard Greene and saxophonist Don Kretmar. Sea Train recorded their first album in 1968, "Planned Obsolescence", however, it was issued under the Blues Project name for contractual obligations. guitarist Bill Lussenden and Country Joe and The Fish keyboardist David Cohen to the trio of Kalb, Blumenfeld and Kretmer. The original Blues Project would reform in 1973 for a concert in Central Park New York but this was some time later. In September 1971, Seatrain toured Great Britain for the first time, performing as a support act for Traffic. They also recorded a TV special in Copenhagen, Denmark which has recently surfaced on YouTube and features them playing material from "Seatrain" and "Marblehead Messenger" and displays their improvisational prowess, especially those of Andy Kulberg and Richard Greene. However, Greene and Peter Rowan would depart Seatrain in 1972 and resurface in Muleskinner, while Jim Roberts and Larry Atamanuik joined the backing band of Emmylou Harris (Atamanuik would later tour and record with Alison Krauss and Union Station). Andy Kulberg and Lloyd Baskin replaced these departing members with guitarist Peter Walsh, keyboardist Bill Elliot and drummer Julio Coronado, but only released one more album, 1973's "Watch".

Jim Roberts would return to supply lyrics and vocals for Seatrain. "Watch" is the fourth and final album by Seatrain, recorded in 1973. It is marked with a departure from the electric violin which featured so much on "Seatrain" (and to a lesser extent on "Marblehead Messenger"), and incorporated the use of more session musicians on instruments like vibraphone, cello, accordion, tuba and oboe. The guest list of supporting musicians was impressive, featuring Bill Keith on banjo and Paul Preston on guitar (both well-known folk session players), rock and roll revivalists Sha Na Na on vocals, along with a string section, flute, tuba and oboe, and producer Bueli Neidlinger playing bass. It was their first and last album for Warner Bros. Record with whom they signed after leaving Capitol Records. In a brief retrospective review, All Music called "Watch" a strange, but intriguing release. The material included a revised take on Al Kooper's "Flute Thing" (originally performed by Andy Kulberg as a member of the Blues Project on their second album Projections) and Bob Dylan's "Watching The River Flow".

These tracks were added to with several new compositions, kicking off with the up-tempo "Pack Of Fools" by Kulberg and Jim Roberts. Lloyd Baskin wrote "Bloodshot Eyes" and "We Are Your Children Too", while Kulberg and Roberts also contributed "North Coast" and "Freedom Is The Reason". Richard Greene co-wrote "Abbeville Fair" with Kulberg, and Kulberg's "Scratch", a simple acoustic folk story, completed the band's input. The musical span included country, rock, folk, gospel and blues styles as in previous Seatrain recordings, with Peter Walsh's strident guitar style dominating the proceedings and replacing Peter Rowan in the guitar/vocal chair. This time Seatrain also became susceptible to mid-1970s hip musical trends, adding in funky passages and "Shaft"-like guitar. However, this diversity is not necessarily a bad thing, and while it is a product of its time. "Watch" is still distinctive and sound worthy enough to bear a Seatrain moniker although minus two of its major previous practitioners.

Seatrain broke up shortly after the release of "Watch" and this coincided with Andy Kulberg re-joining the Blues Project, who had reformed in 1971. The Original Blues Project Reunion in Central Park featured Al Kooper (but not Tommy Flanders) and the concert was released as a live double album that found them recapturing much of their early energy and innovation. There was also a 1997 double album compilation, "The Blues Project Anthology", which was the last known recording of the Blues Project (bar a more recent issue of recordings cut at The Matrix in San Francisco in 1966). Since then, the group's activity has been confined to a few sporadic reunions such as when the Blues Project played a fundraising concert at Valley Stream Central High School in New York, promoted by Bruce Blakeman with the proceeds going to the Youth Council and the US Olympic Committee.

In the period between 2001 and 2007, Roy Blumenfeld drummed in the Barry Melton Band. Steve Katz, in the meantime, formed American Flier with Eric Kaz, Craig Fuller and Doug Yule, recording two albums for UA Records: "American Flier" (1976) and "Spirit Of A Woman" (1977). He also produced three albums for Irish Celtic rock band Horslips: "The Man Who Built America" (1978), "Short Stories Tall Tales" (1979) and "The Belfast Gigs" from 1980, the Lou Reed albums "Rock'n'Roll Animal" and "Sally Can't Dance", and the Elliott Murphy album "Night Lights". Becoming interested in Celtic music he worked in management for Green Linnet Records in the early 1990s. Al Kooper had a successful solo career recording for CBS and also producing Lynyrd Skinner's debut album "Pronounced 'L h-'nerd 'Skin-'nerd" and also wrote his autobiography, Backstage Passes And Backstabbing Bastards, in 1998. Seatrain became embossed in legend after their 1973 dissolution, but their individual albums still stand up. With Andy Kulberg's return to the Blues Project, both their story and that of Seatrain retain an internal connection that crosses decades and combined musical ideals in both bands' eclectic mixes of rock, folk, blues and jazz, the results of which fusions were and remain highly original and under-appreciated.

The story of Seatrain is that of one of the most accomplished and intriguing rural rock bands to emerge from America. It's a story littered with creative opportunity used and built upon, its quality and versatility subject to the swings and roundabouts of commercial acceptance and popularity. Seatrain's albums are still tantamount to a golden period of American music in all its post-psychedelic diversity and difference. Watch, the final chapter in the Seatrain story, is no idle bookend; it's as diverse, intricate and innovative as its predecessors.