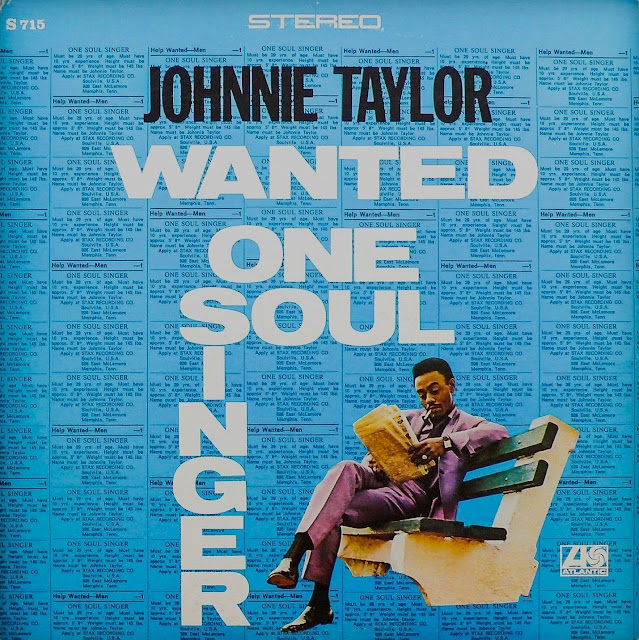 Johnnie Harrison Taylor was a popular gospel and rhythm and blues singer, known as the Philosopher of Soul, whose recording career spanned forty-six years. His single "Disco Lady" was the first single ever to be certified platinum. He was added to the Arkansas Black Hall of Fame in 1999. Johnnie Taylor was born in Crawfordsville (Crittenden County) on May 5, 1934. The official date of his birth was not revealed until after his death; he had long claimed to be four years younger. The youngest of three siblings, he was raised by his grandmother in West Memphis. She was religious and made sure he attended church regularly. He made his church singing debut at age six, and inspired by both gospel and the blues, he decided at a young age that he wanted to make a living by singing.

Taylor moved to Kansas City, Missouri, at age ten with his grandmother, and during his teen years, sang with a gospel quartet, the Melody Kings. They occasionally opened for the famous, highly influential gospel group, the Soul Stirrers, whose young lead singer, Sam Cooke, befriended Taylor. By 1953, Taylor had moved to Chicago, Illinois, and was singing with the doo-wop group the Five Echoes, with whom he made his first recordings on the VeeJay label. Shortly afterward, he also began singing with the Highway QCs, a long-running, popular gospel quartet in which Cooke and Lou Rawls had previously been members. The QCs made their recording debut in 1955 with Taylor singing lead on "Somewhere to Lay My Head", which made the group a nationwide gospel attraction.

When Cooke left the Soul Stirrers, Taylor was chosen to be his replacement in 1957. While a member of the group, he became an ordained minister and preached his first sermon at Fellowship Baptist Church in Chicago. After a wreck in which he ran over a little girl in 1960, Taylor was booted from the Soul Stirrers and went to Los Angeles, California, intending to preach full time. In 1963, however, Cooke signed him as the first artist on his new SAR label, and Taylor, still stinging from being kicked out of the Soul Stirrers and determined to find his place in the music marketplace, began recording secular music. His first solo single was "A Whole Lot of Woman" in 1961. Other notable early Rhythm'n'Blues recordings were "Rome (Wasn’t Built in a Day)" (1962) and "Baby We’ve Got Love" (1963), which was his first song to appear on Billboard magazine’s Top 100 chart. The label folded after Cooke’s death in 1964.

In 1966, Taylor signed with Stax Records in Memphis, Tennessee, where Stax executive, Al Bell of North Little Rock (Pulaski County), dubbed him the Philosopher of Soul. At Stax, Taylor polished his musical style, which combined gospel, Rhythm'n'Blues, and Blues, as well as his flamboyant appearance, and he proceeded to become one of the label’s top-selling performers, outselling such big stars as Otis Redding and Carla Thomas. He had a prolific run on the R&B charts, beginning with "I Had A Dream" (1966). His first song on the Stax label to break the pop Top 100 was "Somebody’s Sleeping in My Bed" (1967). In 1968, Taylor had his first major crossover pop and Rhythm'n'Blues hit in "Who’s Making Love", a funk/soul song that went to number one on the Rhythm'n'Blues charts and hit number five on the pop charts. The success of "Who’s Making Love" enabled Taylor to hire a superb, permanent touring band for the first time in his career, and he became a major performer on the "Chitlin' Circuit" all across the South. Subsequent hits included "Take Care of Your Homework" (1969), "Jody’s Got Your Girl and Gone" (1971), "I Believe in You (You Believe in Me)" (1972) and "Cheaper to Keep Her" (1973). By this time, he had perfected his style of smooth, soulful crooning, which incorporated gospel, blues, and soul.

When Stax Records went bankrupt in 1975, Taylor signed with CBS Columbia Records. In 1976, he released his first CBS album, titled "Eargasm", which contained his biggest hit, "Disco Lady", which went to number one on both the Rhythm'n'Blues and pop charts and became the first single ever to be certified platinum, selling more than two million copies. CBS pushed him to record more tunes in the disco genre, not taking advantage of the full range of his talent. His record sales slipped, and he began to look for another label. In 1982, Taylor signed with Beverly Glen Records and got back on the Rhythm'n'Blues charts with "What About My Love". In 1984, he signed with Malaco Records and became one of its most popular artists. He released a succession of hit Rhythm'n'Blues albums for the label, beginning with "This Is Your Night". His 1996 album, "Good Love", topped Billboard’s blues charts on the strength of the single "Last Two Dollars", and the album became the biggest seller in Malaco history. Taylor released his final album, "Gotta Get the Groove Back", in 1999. In that same year, he was given a Pioneer Award by the Rhythm and Blues Foundation. While living in Duncanville, Texas, a suburb of Dallas, Taylor suffered a heart attack, and on May 31, 2000, he died at Charleton Methodist Hospital in Dallas.